It gets complicated because, sometimes, the best strategies to keep water vapor out also trap water vapor in. This can be a real problem if the assemblies start out wet because of rain or the use of wet materials (wet framing, concrete, masonry or damp spray cellulose, fiberglass or rock wool cavity insulation).

The good news is that water vapor moves only two ways - vapor diffusion and air transport. If we understand the two ways, and know where we are (climate zone) we can solve the problem.

Building assemblies, regardless of climate zone, need to control the migration of moisture as a result of both vapor diffusion and air transport. Techniques that are effective in controlling vapor diffusion can be very different from those that control air transported moisture. When temperature differences become large, water vapor can condense on cold surfaces. When condensation occurs, water vapor is removed from the air and converted to liquid moisture on the surface resulting in a reduction in water vapor density in the air near the cold surface (i.e. a lower vapor pressure). These cold surfaces now act as "dehumidifiers" pulling more moisture towards them. Vapor retarders should not be confused with air barriers whose function is to control the movement of air through building assemblies. In some instances, air barrier systems may also have specific material properties which also allow them to perform as vapor retarders. For example, a rubber membrane on the exterior of a masonry wall installed in a continuous manner is a very effective air barrier. The physical properties of rubber also give it the characteristics of a vapor retarder; in fact, it can be considered a vapor "barrier." Similarly, a continuous, sealed polyethylene ground cover installed in an unvented, conditioned crawlspace acts as both an air barrier and a vapor retarder; and, in this case, it is also a vapor "barrier." The opposite situation is also common. For example, a building paper or a housewrap installed in a continuous manner can be a very effective air barrier. However, the physical properties of most building papers and housewraps (they are vapor permeable - they “breathe”) do not allow them to act as effective vapor retarders.

The key physical property which distinguishes vapor retarders from other materials, is permeability to water vapor. Materials which retard water vapor flow are said to be impermeable. Materials which allow water vapor to pass through them are said to be permeable. However, there are degrees of impermeability and permeability and the classification of materials typically is quite arbitrary. Furthermore, under changing conditions, some materials that initially are “impermeable,” can become “permeable.” Hygroscopic materials change their permeability characteristics as relative humidity increases. For example, plywood sheathing under typical conditions is relatively impermeable. However, once plywood becomes wet, it can become relatively permeable. As a result we tend to refer to plywood as a vapor semi-permeable material.

Non-hygroscopic materials such as polyethylene or plastic housewraps do not change their permeability as a function of relative humidity. The unit of measurement typically used in characterizing permeability is a “perm.” Many building codes define a vapor retarder as a material that has a permeability of one perm or less as tested under dry cup test method.

Materials can be separated into four general classes based on their permeance:

Materials that are generally classed as impermeable to water vapor are:

Materials that are generally classed as vapor semi-impermeable to water vapor are:

Materials that are generally classed as vapor semi-permeable to water vapor are: 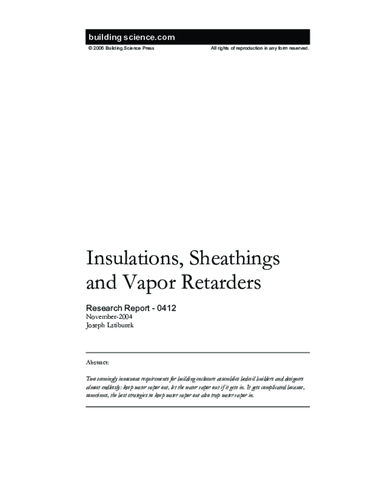