Proper vapor control in assemblies is primarily a design responsibility. The viable strategies are informed by climate, exposure, cladding type, structure material, and also by an understanding of the intended occupancy and operation of the building. Consult the resources listed below for further discussion of vapor control in building assemblies.

What is fundamental to robust assemblies is that they have the ability to dry if they become wet. It is often said the buildings or walls need to “breathe.”  Actually, it is more correct to say that assemblies need to be able to dry.

Perhaps it goes without saying that moisture problems can be caused during the construction phase if water sensitive materials are allowed to become wet. Problems can also be caused if wet materials are enclosed by vapor retarder or vapor barrier materials before being allowed to dry (e.g. finishes applied over damp-spray insulation before it is dry, finishes applied over concrete that has not released sufficient construction moisture.

Using substitute materials having lower vapor permeance than those originally specified in an assembly may also lead to moisture problems in the near- or long-term, as these less permeable materials will inhibit drying of the assembly. Extreme care must be exercised not to substitute enclosure assembly materials with materials that are less vapor permeable. It is also critical not to install specified vapor retarders or vapor barriers over assemblies before these have had an opportunity to dry. Finally it is important to avoid the application of materials that will act as vapor retarders in locations where a vapor retarder is not specified.

The following table offers a general classification system for permeability of materials as well as the IRC vapor retarder classification. It is always recommended to consult manufacturer product data in order to permit a more precise comparison of material properties.

Some sources will provide vapor permeability in terms of “wet cup” and “dry cup” conditions. Some materials (such as paints or wood products) become more permeable at higher relative humidity conditions; plastic materials (such as housewraps and foams) typically do not see this effect.  “Wet cup” tests give material behavior at high humidity, while “dry cup” provide it for low humidity. 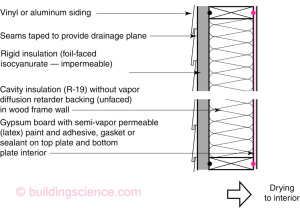 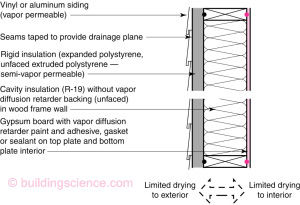 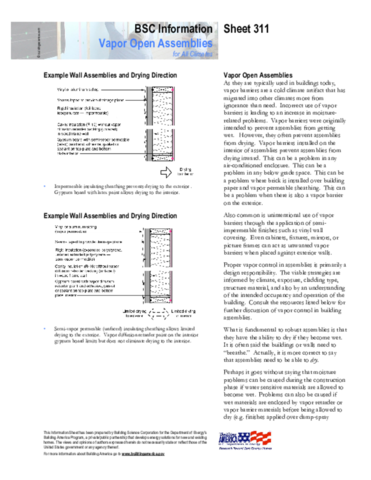