Air barriers are systems of materials used to control airflow in building enclosures. They typically completely enclose the air within a building. The physical properties which distinguish air barriers from other materials are the ability to resist air flow and air pressure.

Air barriers are intended to resist the air pressure differences that act on them. Rigid materials such as gypsum board, exterior sheathing materials like plywood or OSB, and supported flexible barriers are typically effective air barrier systems if joints and seams are sealed.

Wherever they are, air barriers should be:
• impermeable to air flow
• continuous over the entire building enclosure
• able to withstand the forces that may act on them during and after construction
• durable over the expected lifetime of the building

The air barrier and pressure boundary also separate garages from conditioned spaces. In this regard an air barrier is also the "gas barrier" and provides the gas-tight separation between a garage and the remainder of the house.

Air retarders are different from air barriers. Air retarders are materials or systems that reduce airflow or control airflow but do not resist 5 percent or more of the air pressure drop across an assembly.

Some spray applied foam insulations can be used as interstitial (cavity) air barriers, notably polyurethane foams. Typically applied damp spray cellulose is not an effective interstitial air barrier — rather it is an air retarder.

The significant advantage of exterior air barriers is the ease of installation and the lack of detailing issues due to intersecting partition walls and service penetrations. However, exterior air barriers must deal with transitions where roof assemblies intersect exterior walls. For example, an exterior housewrap should be sealed to the ceiling air barrier system across the top of the exterior perimeter walls.

Installing both interior and exterior air barriers addresses the weakness of each.

Air barriers can also be provided with properties which also class them as vapor barriers. An example of this is polyethylene film which can be used as both an air barrier and a vapor barrier.

Interior drying is typically necessary in air conditioned enclosures. In other words, interior vapor barriers such as polyethylene should never be installed in an air conditioned building — even one located in very cold climate. Figure 2: Interior Air Barrier Using Polytethyene—This approach is not recommended for cold, mixed-humid, marine, mixed-dry or hot-dry climates due to the impermeability of the polyethylene; recommended for very cold climates only in non-air conditioned buildings 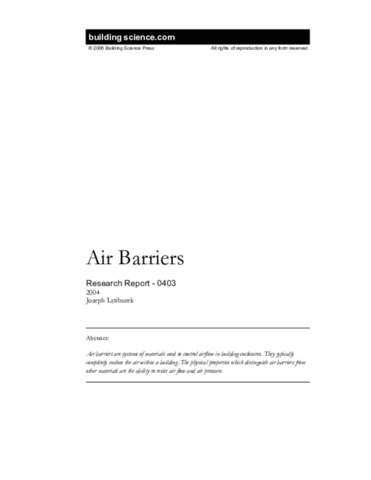