Things have evolved considerably since the Eisenhower and Diefenbaker years. Hutcheon2 taught us about air flow that decade but it took more than a half century to get it right. We needed air control. We needed an air control layer – an air barrier. We started off with locating it on the inside, moved it to the middle, and finally ended up with it on the outside3. We started by combining it with a vapor barrier on the inside then we finished by combining it with a weather resistive barrier (WRB) and continuous insulation on the outside (Figure 1, Figure 2, Figure 3, Figure 4, Figure 5, and Figure 6). 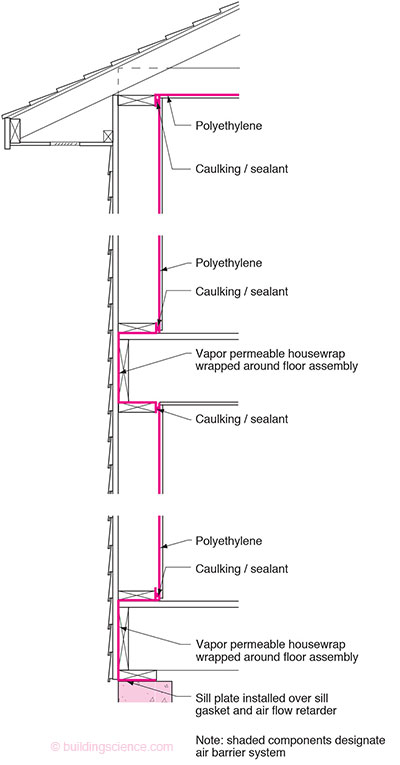 Figure 1: Polyethylene Air-Vapor Barrier—The period of “black death” where acoustical sealant that was black in color was used to seal overlapping sheets of 6 mil polyethylene to create a continuous air barrier. Note that where the membrane sheet wrapped the exterior rim joist it needed to be vapor open. Vapor open “housewraps” or plastic building papers were used in these locations. 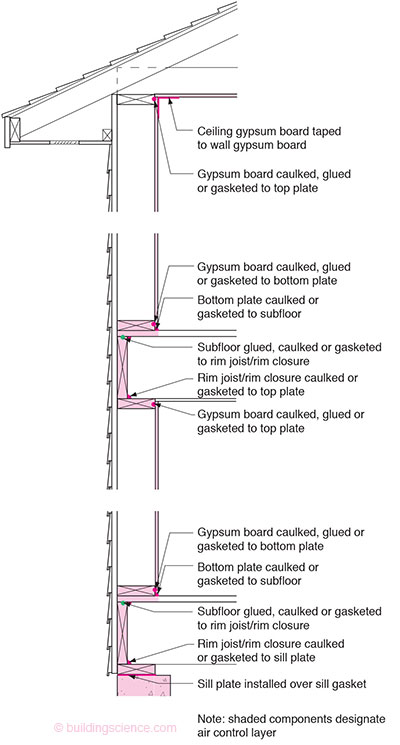 Figure 2: The “Airtight Drywall Approach”—The interior gypsum board lining became the air barrier. The approach was more robust than polyethylene air-vapor barriers and since gypsum board was not a vapor barrier the approach could be used in any climate. However to get to similar extraordinary levels of airtightness painstaking effort was still required. Figure 3: The Interstitial Air Barrier-Airtightness can also be provided within building framing elements. This is most commonly achieved using spray polyurethane foam (SPF). 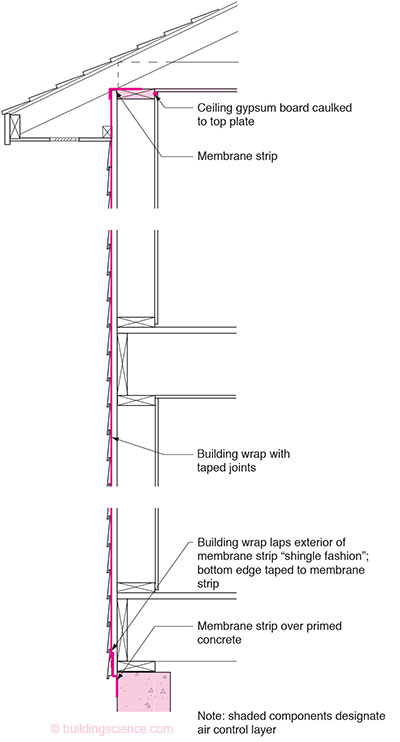 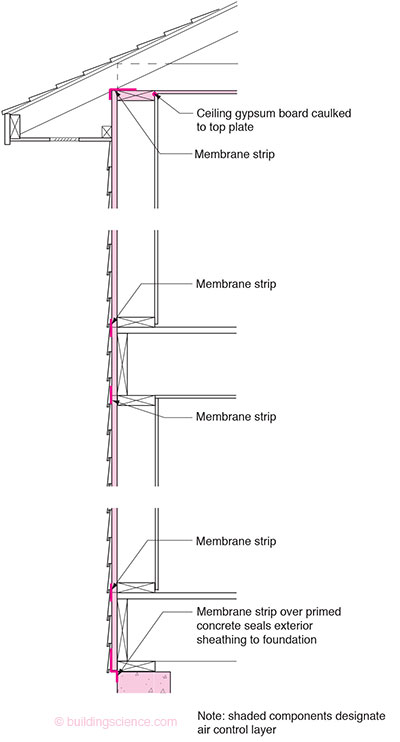 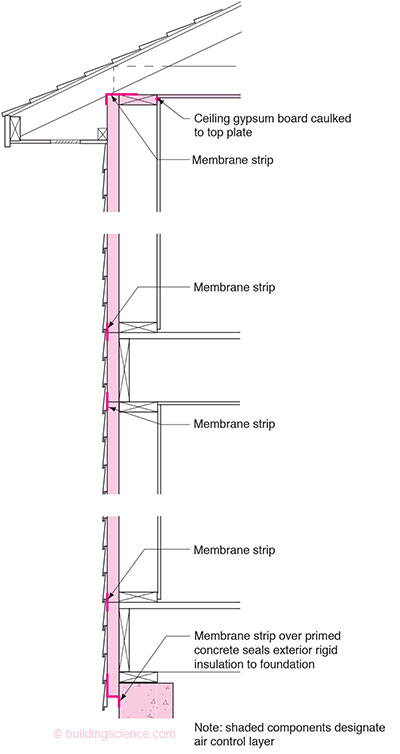 Figure 6: Insulating Sheathing Air Barrier—Adding the function of thermal control to the sheathing in addition to water control and air control.

Throughout the postwar years practitioners were taught, incorrectly, that vapor barriers were necessary in cold climates to protect wall assemblies from moisture damage and that it was necessary to install these vapor barriers on the interior of cavity insulation. The industry saw the introduction of kraft facings and foil facings on batt insulations as a result. These vapor barriers were by their very nature discontinuous and they proved ineffective in protecting wall assemblies from vapor. Vapor is principally transported by air flow not by vapor diffusion. We needed air barriers not vapor barriers to control vapor flow. It took decades for that distinction to be appreciated.4

The first attempt at addressing the issue was to take a vapor barrier material and turn it into an air barrier. The result was coined an “air-vapor barrier”. Sheet polyethylene was already being installed on the interior of insulated wall assemblies as a vapor barrier (Photograph 1). It was given a second function – that of air control. Easy to do conceptually - very difficult to do in practice. With painstaking effort and attention to detail extraordinary levels of airtightness were achieved using this approach – less than 1 ach@50Pa. Canada’s R-2000 program was based on this approach. The sealant used was “acoustical sealant” as it would remain flexible over the service life of the building. It soon got the moniker of “black death” as it got on to everything including the installer. It became clear that the approach was not a “production friendly” method of achieving airtightness and it was not “robust” in terms of surviving the construction process and in providing performance over the service life of the building. It was also climate sensitive. It made no sense for assemblies that saw air conditioning – it was a vapor barrier on the wrong side of and air-conditioned wall (Figure 1). 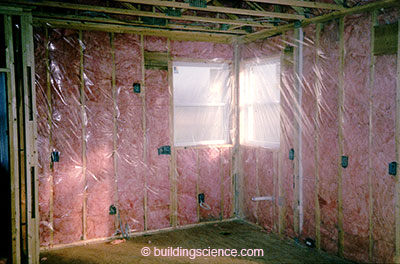 Photograph 1: Plastic Vapor Barrier—Not a “production friendly” method of achieving airtightness and it was not “robust” in terms of surviving the construction process and in providing performance over the service life of the building. It was also climate sensitive. It made no sense for assemblies that saw air conditioning – it was a vapor barrier on the wrong side of such assemblies.

The next step in the evolution of the air barrier was the “airtight drywall approach” (Figure 2) – where the interior gypsum board lining became the air barrier (Photograph 2). Sheet polyethylene was no longer necessary. The approach was more robust than polyethylene air-vapor barriers and since gypsum board was not a vapor barrier the approach could be used in any climate. However to get to similar extraordinary levels of airtightness as those being achieved with the poly approach in the R-2000 program painstaking effort was still required. Most production builders concluded such levels of airtightness were not worth the effort. 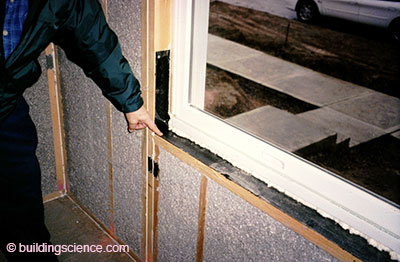 Photograph 2: Interior Gypsum Board as the Air Barrier—Note the sealant at the bottom plates an around window openings.

The focus shifted to targeting only the interior big holes using sealed rigid draft-stopping. Bathtubs and shower enclosures on exterior walls, fireplace assemblies on exterior walls, soffits dead ending in exterior walls, dropped ceilings at enclosure perimeters, garage-to-house connections and cantilevers (Photograph 3 and Photograph 4). A “lite” version “airtight drywall approach”. It became relatively easy for production homebuilders to get below 3 ach@50Pa and the approach morphed into the EPA Energy Star “thermal bypass checklist” and eventually found its way into the model codes5. 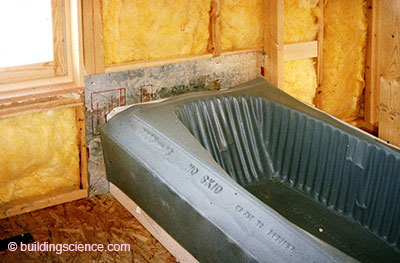 Photograph 3: Bathtub on Exterior Wall—Targeting the big holes with rigid draft-stopping. Of course an even better approach is not have a bathtub on an exterior wall… 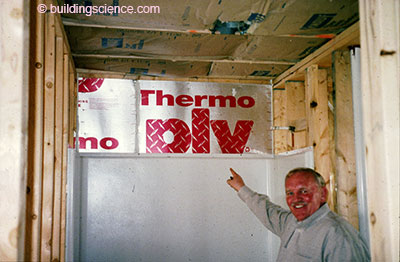 Photograph 4: One-Piece Tub Shower Enclosures—A really, really big hole on an exterior wall sealed by a very happy builder. Note the sealant around the perimeter of the rigid draft-stopping sealing the draft-stopping to the framing.

But getting to 1 ach@50Pa if you were a production builder needed rethinking the problem. There were too many problems with locating the air barrier on the interior. Penetrations from electrical boxes, plumbing, intersecting interior walls and intermediate floor framing made very high levels of air tightness impossible for production home builders with interior air barriers. The focus shifted to the outside.

How about filling the cavities with an air barrier material-spray polyurethane foam (Figure 3 and Photograph 5)? However, in frame construction, spray foam is not continuous at all wood-to-wood connections, such as built up corners, window rough openings, and double top plates. These details need to be addressed. Photograph 5: Interior Spray Polyurethane Foam-In frame construction, spray foam is not continuous at all wood-to-wood connctions. These details need to be addressed.

Why not turn the exterior building paper into the air barrier? Tarpaper was already being used for rainwater control purposes. Why not turn it into an air barrier? Good idea in principle, but tarpaper was not the product up to the task. You could not tape tarpaper and it only came in narrow rolls6. Plastic housewraps were developed and the exterior “air infiltration barrier”7 was introduced (Figure 4 and Photograph 6). 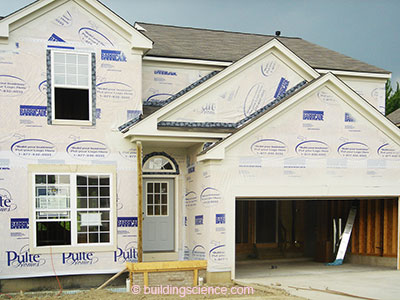 Photograph 6: Air Infiltration Barrier—Classic housewrap rainwater control layer and air control layer. Note the beautiful job of flashing integration with the housewrap. The outside is the right place for air control. 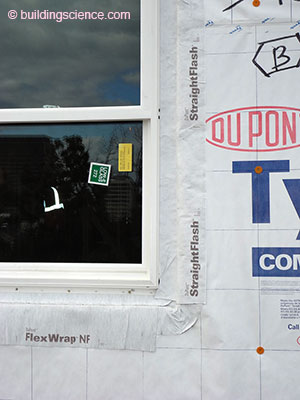 Photograph 7: Robust Rainwater Control—Numerous elegant and clever accessories were introduced to deal with rainwater control particularly at window-to-wall interfaces. This is a formable and flexible membrane “pan flashing” system. 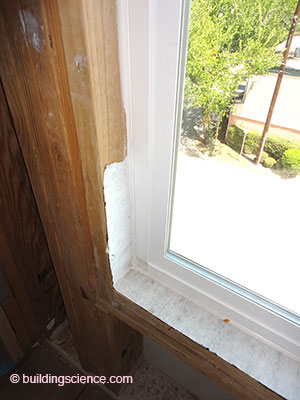 Photograph 8: More Robust Rainwater Control—Beautiful “under window gutter” where the pan flashing is sealed to the interior of the window unit for air barrier continuity.

How about fully adhered membranes? Yup, they worked big time (Photograph 9). Ultra high levels of airtightness were achievable – but at ultra high levels of cost. This was a great commercial building enclosure technology that failed to get traction residentially mostly due to cost. They were not easiest thing to install either. There were also physics related issues. Until very recently no vapor open fully adhered membranes were available which meant that insulation need to be installed outboard of the membranes to control the temperature of the condensing surface during heating - the condensing surface being the interior of the exterior sheathing – typically plywood or OSB. 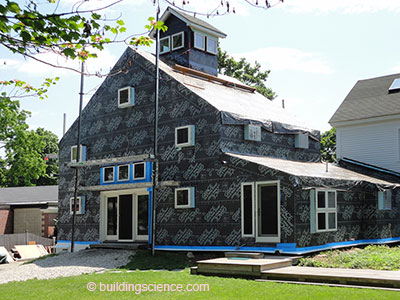 On the commercial side fluid applied air barriers began to make inroads due to their competitive cost and relative ease of installation. It was only a matter of time before they appeared residentially (Photograph 10 and Photograph 11). Overcoming the technical challenges has not proven to be easy. The coatings needed to be able to span joints and they needed to be vapor permeable. And their most important function, rainwater control could not be compromised. After a decade of experience – principally on the commercial side – we are seeing products that are working. Origami is no longer a required skill to flash a window opening (Photograph 12 and Photograph 13)8. 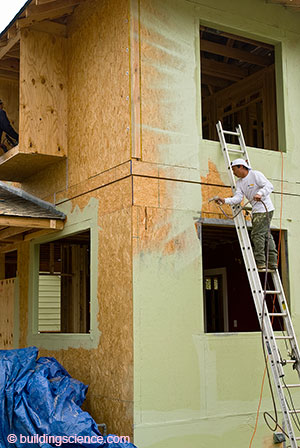 Photograph 10: Fluid Applied Air Barrier—The coatings needed to be able to span joints and they needed to be vapor permeable. And their most important function, rainwater control could not be compromised. 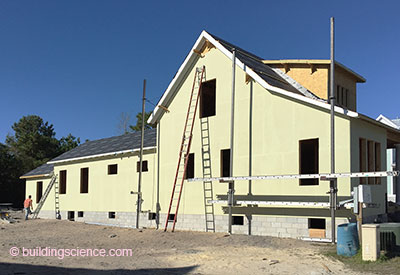 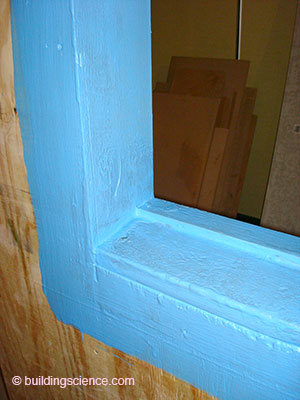 Photograph 12: Window Opening—Origami is not a necessary skill with fluid applied flashing systems. 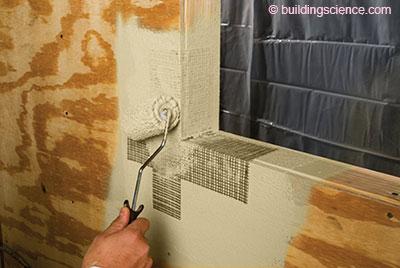 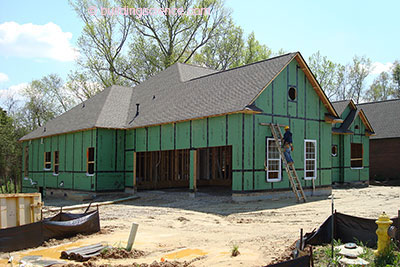 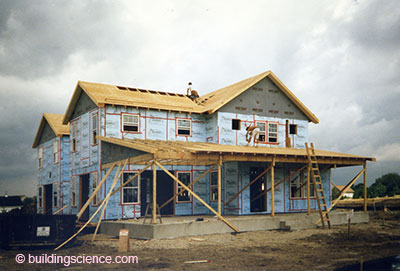 You still need to deal with the joints of course. Tapes are currently the technology of choice, but I see that changing. I see fluid applied joint systems replacing tapes – due to speed, cost, surface adhesion advantages and application temperature advantages (Photograph 16). 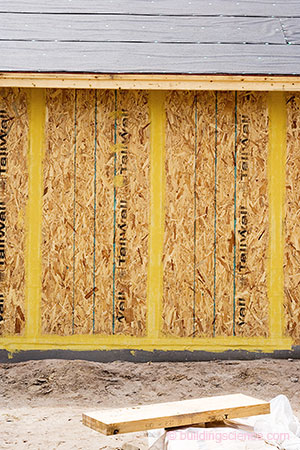 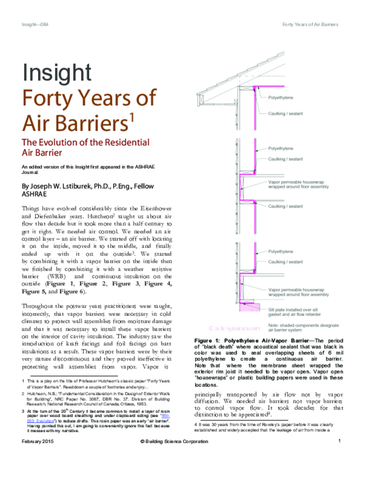