Imagine a three-dimensional molecular billiard game with billiard balls that are sometimes sticky, and where the rules depend on where you are on the table. Then assume that there are many different types of tables and pockets of different sizes. Minnesota Fats and Fast Eddy Felson would have had fits.1

And what we call diffusion isn’t diffusion anyway; it’s a combination of diffusion, capillarity and surface diffusion with simultaneous flows of varying magnitudes sometimes in opposite directions. And the physics is not clear or agreed upon or understood. Consensus? For that you have to go to the IPC.3 You won’t find it here. But in the end, it doesn’t matter to me because I’m an engineer, and I don’t need to know all of this as long as I know what happens in the end.

Here it is. Ready for the answer? All the action happens at the surface.4 That’s it. That’s the magic insight. That’s what you gotta know. A blind man could see it. OK, maybe not. Work with me on this. Ever wonder why dew point calculations never make sense? Think about it. They say that condensation happens in the middle of wall cavity insulation. Ever see any there? Huh, huh? Never. So dew point calculations are a lie? Not really, but folks tend to get the wrong impression with them. It turns out that context is everything. For starters, ASHRAE Handbook—Fundamentals has the dew point calculation thing right, but no one follows the actual ASHRAE procedure. And certainly no one pays attention to the assumptions and limitations for that calculation. Ah, that assumption and limitation thing again. For yuks, you ought to go read Fundamentals.

I remember a great little experiment done for the benefit of us newbies in 1982 at my alma mater, the University of Toronto, by Professor John Timusk (a.k.a. “JT” by his grad students). A wood frame wall with fiberboard on one side, fiberglass insulation in the cavities and nothing on the other side was put into a climate chamber. One side was maintained at 0°F (-18°C) and the other 70°F (21°C) at 50% RH. Quick, what’s the dew point temperature of 70°F air (21°C) at 50% RH? Where is my psychrometric chart? That would be around 50°F (10°C).

Where does that fall in the wall? About a quarter of the way in the wall if you believe Figure 1? Check out Photograph 1. Where is all the frost? It’s on the backside of the sheathing. 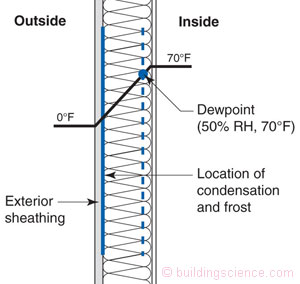 Figure 1: Dew Point Location—The frost and condensation end up on the backside of the sheathing, not at the dew point location. 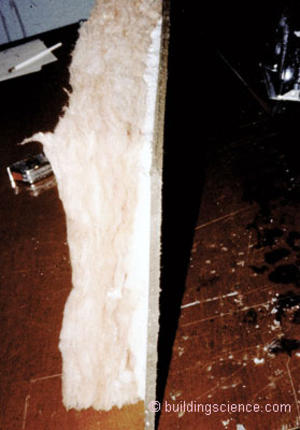 Photograph 1: Surfaces are Where the Action Is—The frost has accumulated at the backside of the sheathing, not in the middle of the cavity insulation.

So why doesn’t the water condense at the dew point location in the fiberglass batt? Well, it actually does; it just doesn’t stay around very long. It moves on to a colder and colder spot until it can’t go any farther easily. The molecular water billiard balls keep beboping along until they get to an interesting spot on the table where the rules change. This cold spot where stuff begins to accumulate is usually a spot of interest to engineers. Some folks call this a “preferential nucleation site” even though nucleation is happening all over the place near and around the dew point location. Whatever. Other folks call this the “first condensing surface” even though it is not really the first condensing surface of interest to most normal people. Normal being very subjective at this juncture in this discussion.

Taking this a little further, the “condensing surface of interest” in a room is typically the interior surface of a window (Photograph 2). The window temperature controls pretty much what happens in the room. In the old days with single pane glass windows it established the maximum vapor pressure in the room since the window was the defacto room dehumidifier. That’s why in the old days we would blow warm air against the inside of the window to warm it up to control condensation. 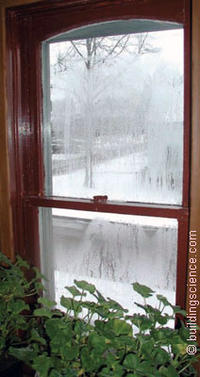 Photograph 2: Window Dehumidifier—Interior surface of the window in a room pretty much controls what happens in the room.

And further still the “condensing surface of interest” in a roof assembly is typically the underside of the attic roof sheathing (Photograph 3) not the middle of the roof insulation (Figure 2). Actually, the nails see the condensation first, then the sheathing. Photograph 4 is what happens when someone has too much time on their hands. 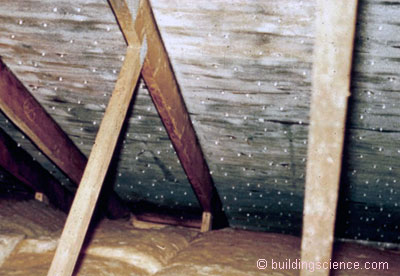 Photograph 3: Roof Sheathing—Nails frost up first, then the underside of the roof sheathing. 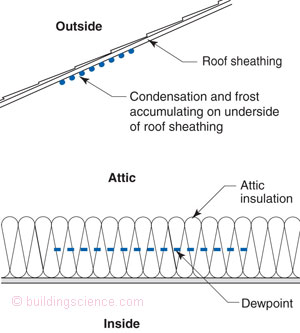 Figure 2: Attic Sheathing—Underside of the attic roof sheathing is where the action is, not at the dew point location in the ceiling insulation. 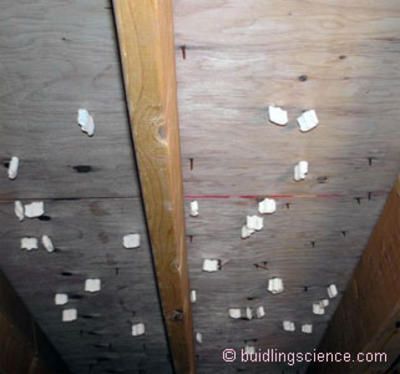 Photograph 4: Condensation Control—Yes, it is true, there are crazy people around. An attempt to warm nails by insulating them. 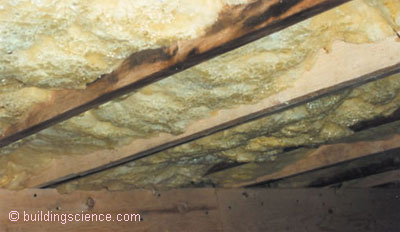 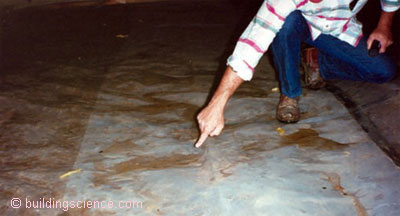 Photograph 6: More Crawlspace Condensation—How did the water get on the top of the plastic ground cover? It condensed out of the ventilation air. 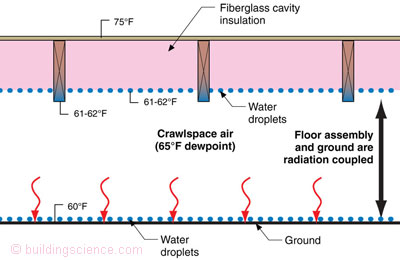 Figure 3: Vented Crawlspace—Moisture accumulates on the underside of the fluffy stuff and on the top side of the plastic ground cover because both of those surfaces are below the dew point temperature of the air in the crawlspace, which is really outside air because that is where it came from. 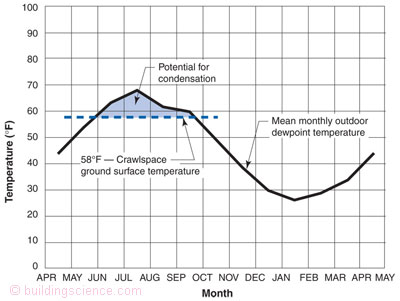 Figure 4: Crawlspace Analysis of Condensation Potential —This is adapted from Handegord and is pretty easy, which is what analysis should be all about. This is a plot of the average outside dew point temperature of the location over the course of a year versus the ground surface temperature in the crawlspace. The shaded area means bad things are happening.

You actually could do a simple analysis to determine risk. Plot the average outside dew point temperature of the location over the course of a year versus the ground surface temperature in the crawlspace. The temperature of the ground surface in the crawlspace we already know to be pretty much the average annual ambient air temperature for that location (Figure 4). I picked Richmond, Va., for the example. Pick one for yourself and do the same thing. Pretty risky in most locations, eh? Notice, there was no real calculation involved, just plotting some temperatures and using some judgment.

How do you handle crawlspaces then? Ah, go back to a previous Insight (BSI-009: New Light in Crawlspaces).

Let’s go back to attics and check out Photograph 7, which is a picture of the top of a thick fiberglass batt from a vented attic. Notice the frost on the top of the batt? Where the heck did that come from? Shouldn’t the frost be on the underside of the roof sheathing? Actually, in this case, it is there as well. This little twist to the reality show we call life comes courtesy of night sky radiation. The roof deck is colder than the outside air dew point and is radiation coupled to the top side of the attic insulation. 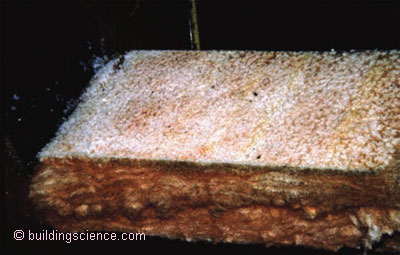 Photograph 7: Radiation Coupling in Attic—Frost on the top surface of attic ceiling insulation.

When the attic is vented and the ventilation air enters the attic it “sees” the two coldest surfaces in the space—the underside of the roof deck and the top of the insulation (Figure 5). Meteorologists tell us that water requires a nongaseous surface to make the transition from a vapor to a liquid. Not a lot of them in the air in an attic. The attic surfaces are where the action is. Notice the keyword “surfaces” again. 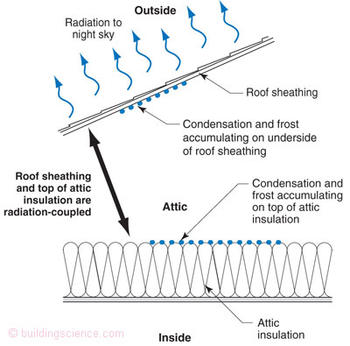 Let’s go back to walls. Could we do a simple analysis to determine risk of condensation? Something better than a dew point calculation and much less complicated than calling up the Greek Geek and the Kaiser? And probably better? Yes, we could do something handed down to us from a legend.6

Remember the crawlspace analysis done earlier? Do the same thing for walls. In fact, folks were doing this for walls before we even thought of doing this type of analysis for crawlspaces. Let’s look at Chicago. It’s an interesting place with interesting physics and more interesting politics. Figure 6 is the potential for condensation in a wood frame wall cavity for various interior dew points. Figure 7 is what happens when you elevate the temperature of the condensing surface by using insulating sheathing. Once again, the key thing to keep in mind is that surface thing. And, notice that we are using “average monthly temperatures.” Why average temperatures? Ah, because they seem to work and give you the right answer. How do we know they give the right answer? Easy, the real world tells us that they do. It seems quaint considering what we do today, which is pretty much sit at the computer, but in the old days we would actually go out and look at real walls an measure them in situ. We even did laboratory experiments, and wait for it, built test huts.

But this type of analysis does not use a computer. Yeah, pretty neat eh? It just looks at surfaces and handles the diffusion part and the air part, too. I was never very good at billiards anyway.

Figure 7: Insulating Sheathing Rocks—The insulating sheathing raises the temperature of the condensing surface of interest. This is a good thing. 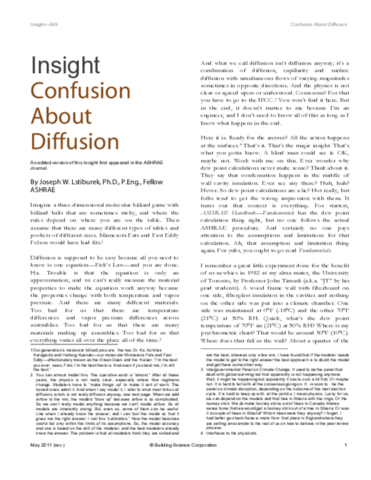