Air flow in buildings is complex, time dependent and multi-directional. The understanding of air flow through and within buildings has been based on the requirement for continuity of mass and momentum caused by wind forces, thermal effects (stack action) and forces associated with the operation of mechanical cooling, heating, exhaust and other ventilation systems.

Many problems associated with pollutant transfer, smoke and fire spread cannot be explained by cross assembly (one dimensional) air flow as well as such moisture effects as microbial contamination, corrosion and biological decay. Even the analysis of energy consumption and comfort within buildings needs to be considered in terms of multi-directional air flow.

Air flow in buildings is complex, time dependent and multi-directional. The understanding of air flow through and within buildings has assumed that wind forces, thermal effects (stack action), and air movement associated with mechanical cooling, heating and exhaust and other ventilation systems are the dominant factors relating to air pressure relationships and air pressure related building performance.

In principle, this view is correct, though often too simplistic. Under this view, the wall assemblies, roof assemblies, interior floors and demising walls/partitions are treated either as monolithic or having through-the-assembly openings. Air flow has been assumed to occur across these assemblies, from one side to the other based on the air pressure difference across them, typically through simple leakage areas resulting in one dimensional air flow.

Actually, exterior wall, roof, interior floor and interior wall/partition assemblies are often hollow or multi-layered with numerous air gaps or void spaces and can operate under air pressure regimes (fields) that are largely independent of the air pressures on either side of them. Typical buildings also contain numerous service chases that provide complex three-dimensional linkage among the exterior wall, roof, interior floor and interior wall/partition assembly cavities and void spaces. These interstitial air pressure fields within building assemblies and their linkage to chases and service cavities can lead to lateral flow paths or more intricate three dimensional flow paths that may or may not connect to the interior or exterior spaces that the building assemblies separate. 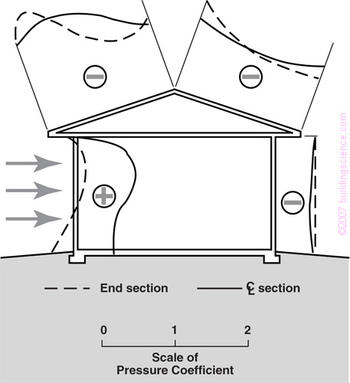 Figure 3: Pressure coefficients on walls and roof of rectangular
buildings without parapets (ASHRAE Handbook of Fundamentals) 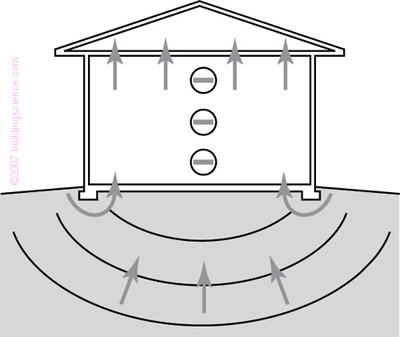 The interior field occurs within spaces such as rooms, corridors, stairwells, and elevator shafts (Figure 5) and is dominated by the operation of air conveyance systems, the stack effect and wind. The interior field is typically bounded by the interstitial air pressure field except in the special case of monolithic, solid, non porous walls, floors and roofs. 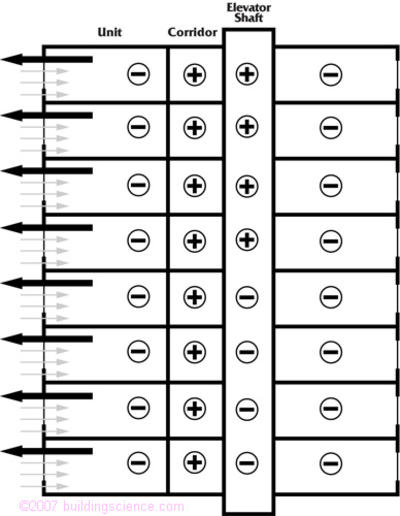 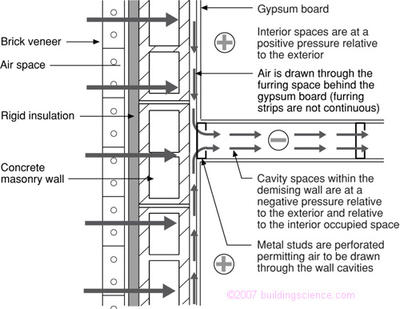 The air conveyance system field occurs within the ductwork of forced-air thermal distribution systems, chimneys, air exhaust and air supply systems (Figure 7) and is dominated by the size and capacity of duct work, fans and blowers and temperature differentials. It is bounded by the other three pressure fields. 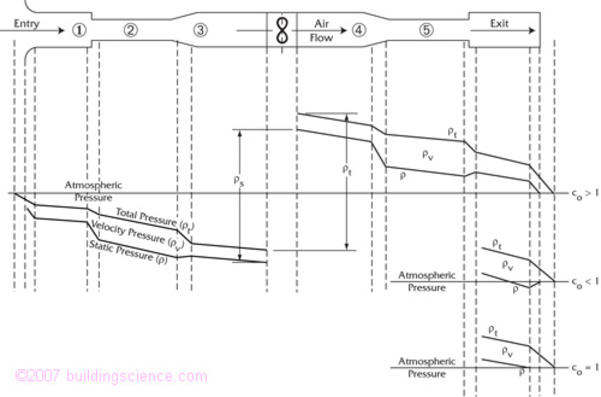 These air pressure fields are coupled and interact dynamically. The interstitial field provides linkage between the exterior field, the interior field and the air conveyance system field.

A hotel room/bathroom suite with an exhaust grill, a fan coil unit, corridor make-up air and steel stud partition walls provides a good example of the dynamic interaction of the component fields and the limitations of traditional analysis (Figure 8). 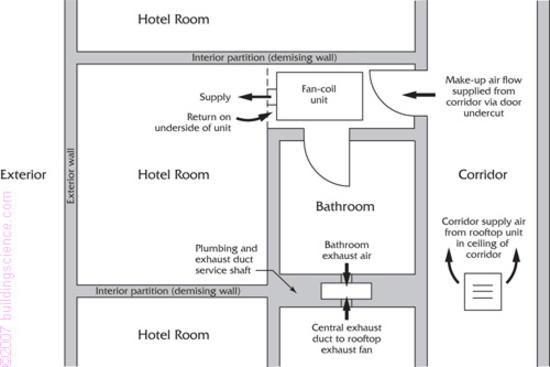 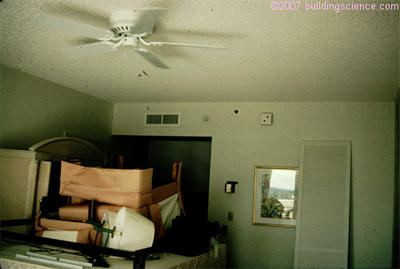 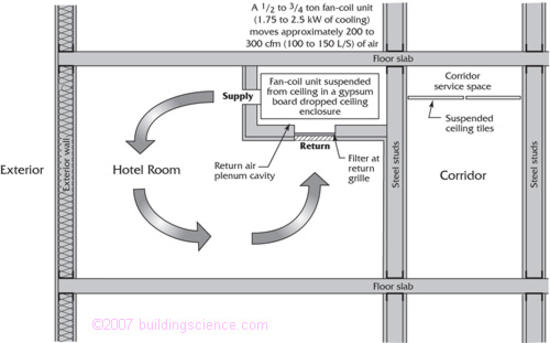 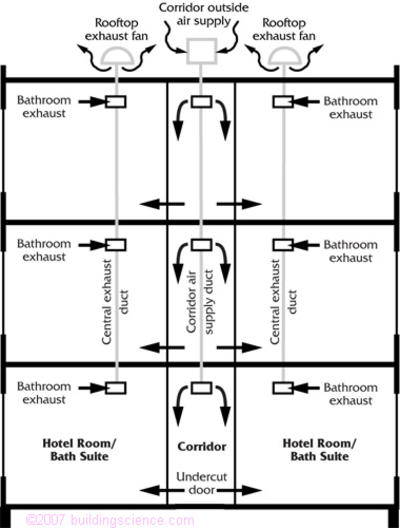 The design intent typically calls for the hotel room to be pressurized relative to the exterior. The reason for pressurization to be called for in the design intent is the control of infiltrating hot, humid air during cooling periods, the exclusion of exterior pollutants and the minimization of drafts during heating periods. Standard practice calls for supplying approximately 15 percent more air to a room than is exhausted to accomplish this. For example, if the exhaust flow out of the bathroom is 25 L/s, the design make-up air to be supplied to the hotel room/bathroom suite through the door undercut is approximately 30 L/s.

Mold contamination under vinyl wall coverings is an increasingly common problem in interior partition wall assemblies associated with buildings constructed as described in Figure 8, Figure 9 and Figure 10. The investigation of such a problem is typically instigated by one or a combination of the following symptoms: 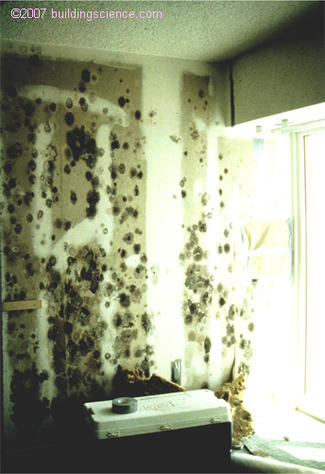 Using traditional analysis, an investigation of the moisture damage in an unoccupied hotel room as described proceeds along the following path:

At this point the investigation and analysis typically breaks down. More often than not moisture of construction is assumed to be the culprit and the contractor is blamed for not covering the work during construction and preventing rain wetting of the materials. This argument is typically eroded if the hotel is more than a few years old and no explanation what-so-ever is provided.

Hotel building envelope and interior wall construction are typically steel studs with gypsum board (Figure 11).  Steel studs are perforated with punched openings to facilitate installation of services.  These perforations create a connected wall cavity in both interior and exterior walls.  In exterior walls, fiberglass batt insulation is installed. As fiberglass batt insulation provides very small resistance to air flow, the connected wall cavity construction in both interior and exterior walls permits considering these walls as acting as air ducts. 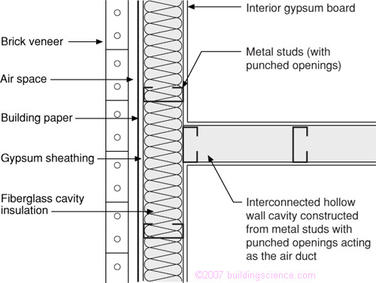 When examining the pressure fields, the investigation of the moisture damage in an unoccupied hotel room as previously presented proceeds along the following path:

At this point the investigation is essentially complete. The interpretation of the results follow.

If this air pressure field within the partition wall is also negative with respect to the exterior, it leads to the infiltration of hot humid air during cooling periods and contaminants during other periods through the exterior wall assembly, down the demising wall to the dropped ceiling assembly (Figure 12). During cooling periods when this air is cooled due to the cooling of the hotel rooms on both sides of the partition wall, moisture is deposited in the wall cavities leading to mold and microbial contamination.

In a similar manner to the fan coil unit induced interstitial partition wall depressurization, leakage of the central exhaust duct located within the plumbing service shaft also leads to the creation of a negative air pressure field relative to the rooms in the opposite demising wall that also extends to the exterior wall. This negative air pressure field exists only when the roof top exhaust fan operates and again exists despite the positive air pressure in the hotel room (Figure 13). When the bathroom door is closed, the flow path from the suite to the exhaust grill in the bathroom is interrupted creating a flow resistance resulting in more air to be extracted from the partition wall.  This results in increased depressurization within the partition wall on a cycle matched to the opening and closing of the bathroom door.

The negative air pressure field due to the roof top exhaust fan (as modified by bathroom door closure) may or may not be negative with respect to the exterior. If it is negative with respect to the exterior, it will result in the infiltration of exterior air into the partition wall, similar to the fan coil unit example. However, it will not lead to an increase in the levels of air borne moisture within the room since the flow path of this infiltrating air is to the plumbing service shaft and subsequently out of the building via the roof top exhaust fan. This infiltrating air does not enter the rooms on either side of the partition wall.

The significance of these complex, time dependent interstitial air pressure fields has not been appreciated or identified for several reasons:

In the past buildings were leaky, not well insulated and the effect of HVAC systems and other air conveyance systems on building pressures was small. The key air pressure relationships defining interstitial air pressures are also small and have until recently been difficult to measure and quantify. Older building structures were more massive with exterior wall assemblies and interior partitions constructed from masonry, masonry back-up and plaster resulting in few or no interstitial connected cavities. More recent construction relies on metal framing, steel studs, gypsum board interior and exterior sheathing resulting in more numerous and larger void spaces, chases and interstitial cavities. 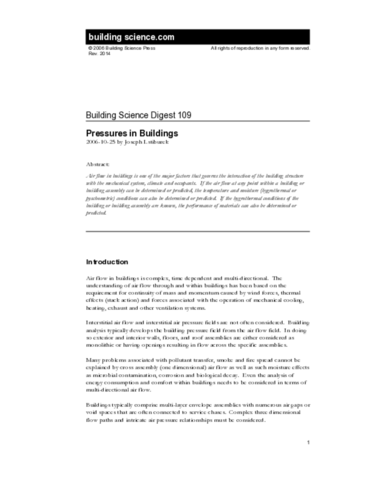