BSI-021: Thermodynamics: It's Not Rocket Science

Of course the crazy way we speak about the Second Law does not help: “In an isolated system, a process can occur only if it increases the total entropy of the system.” Huh? It makes you want to hate Rudolf Clausius. Couldn’t he just say that heat goes from warm to cold?1 Most of us get the heat goes from warm to cold thing. It’s the other simple applications of the Second Law that we miss:

The two moisture “rules”—“warm to cold” and “more to less” are nothing more than a “thermal gradient” and a “concentration gradient.” If you combine the thermal gradient and the concentration gradient you get the “thermodynamic potential” and according to the Second Law water always follows the thermodynamic potential. The psychrometric chart is a graphical representation of “warm to cold” and “more to less”—thank you Willis Carrier. 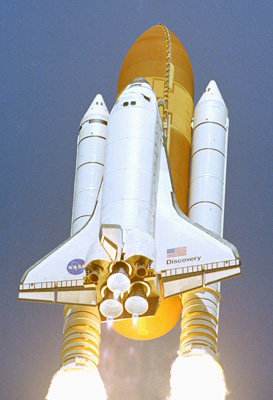 Photograph 1:  Space Shuttle—One of the fundamental problems with the Space Shuttle is the shedding of foam from the external tank.

This “warm to cold” and “more to less” thing should be pretty easy. But seemingly smart folks get it wrong all the time. Take the Space Shuttle. The problem with the Space Shuttle is that foam keeps coming off of the external tank of the orbiter (Photograph 1). The problem is best described thusly: we have an aluminum pressure vessel filled with a cryogenic liquid on a beach in Florida in July. The best analogy for this is Photograph 2. The author does not have the research budget of NASA so a few liberties were taken with the authors’ experimental design defining the problem (Photograph 3 and Photograph 4). 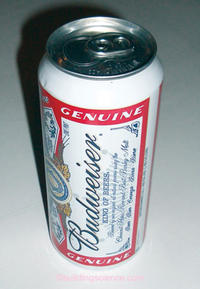 Photograph 2:  Engineering Analogy—“Aluminum pressure vessel filled with a cryogenic liquid on a beach in Florida in July.” 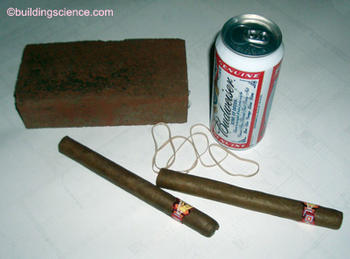 Photograph 3:  Limited Research Budget—“Richard Feynman eat your heart out…you only had a glass of ice water at the Challenger enquiry.” 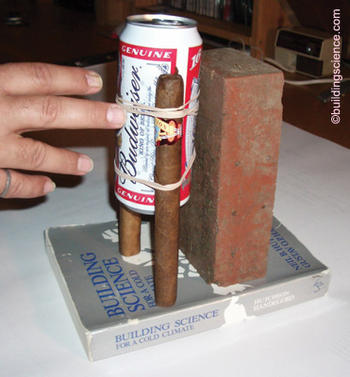 Most of us know intuitively that the Bud will sweat. And most of us know we need to insulate the Bud. But how many of us know that the insulation needs to control the vapor drive?  And what is the magnitude of the vapor drive anyway?  Figure 1 shows the boundary conditions. The surface of the foam goes to 150 degrees F. on a sunny day—it is brown in color after all.  In the summer it rains in Florida every day at 1 pm. So let us add a film of liquid phase water to the surface of the foam and wait for the sun to come back out. Now try to find where the saturation line (i.e. 100 percent RH) crosses the 150 degree F line on a pyschrometric chart. Nope. Not there. Can’t find it. Off the chart, so far off the chart we are in uncharted territory…Try the steam tables. Holy vapor pressure Batman, 13 kPa. Now, how about finding the vapor pressure at minus 420 degrees F?  This one is easy—you don’t need no stinkin’ chart for that…can we say “zero’?  We are talking some kind of serious inward vapor drive—13 to 0 kpa. 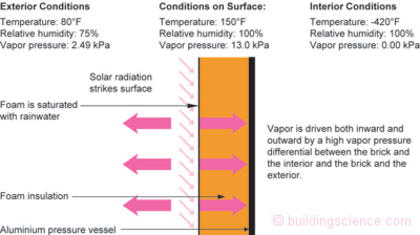 Now ask the question that certain rocket scientists apparently have not asked: how resistant is the foam insulation on the external tank to vapor flow? The foam has a permeance of 3 perms per inch. The foam is 2 inches thick. Yup, that would make the resistance to flow 1.5 perms. I am no rocket scientist3 but that sounds kind of high permeance wise to me. Seems to me that water vapor will flow through the foam under that magnitude of vapor drive like brown organic matter through a goose.

I wonder what happens when the vapor hits the aluminum lining of the tank? It’s not just foam coming off the tank, but hunks of ice. A way of thinking of this is that we have a vapor barrier on the wrong side of the assembly. Seems to me that we need a vapor barrier on the outside of the assembly. Just for laughs go and “Google” the first shuttle launches and check out the pictures and ask yourself what looks different? Notice the “white” stuff on the external tank of these early launches—looks like a low perm aluminum skin to me. Apparently, the vapor control got “value engineered” out of the assembly after the first few launches to save weight. Violate the Second Law at your peril.

Let’s move on to FEMA and New Orleans and Katrina. It is hard to believe this if you have not seen this with your own eyes. Trailer after trailer after trailer (Photograph 5). Where is New Orleans on the map? It is smack dab in the ASHRAE hot-humid climate region. Most of us intuitively know that this means it is pretty much hot and humid outside almost all the time in New Orleans. Here is the tricky part—we air condition the inside in New Orleans. Yes, it is true. We make the inside colder and drier than the outside in New Orleans. So, work with me on this…the outside is hot and humid and the inside is cold and dry. It is that pesky Second Law again.  What direction is the vapor drive? We can actually use a pyschrometric chart for this example and not have to go to the steam tables—so it is not as hard as NASA’s problem.

Photograph 5:  FEMA Trailers—Thousands and thousands of these are located in hot-humid climates.

With a dominant inward vapor drive (there is not much of a winter in New Orleans) what is the last thing you would want to see on the inside of an assembly in New Orleans? Yes, that is right, a vapor barrier. You absolutely positively would not ever want to see a vapor barrier on the inside of an air-conditioned assembly in New Orleans. Yes, you guessed it. All FEMA trailers have an interior vapor barrier (Photograph 6). The FEMA trailers are lined with gypsum board wrapped with vinyl facings. And they are turning the trailers into moldy stinky messes. And it is not like FEMA wasn’t warned. They and HUD and the mobile home/manufactured home industry all blindly continue to believe that this is not a problem. But hey, it is poor people in these trailers, who is going to notice? 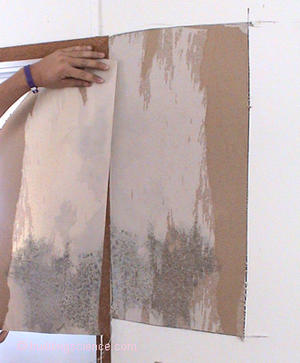 One of the first signs are “pink spots” on the surface of the vinyl wall coverings (Photograph 7). Molds growing on the back of the vinyl (Photograph 8) exude digestive enzymes that react with the plasticizers in the vinyl leading to the discoloration. These spots are typically referred to as the Marriott measles, the Radisson rash, and the Hyatt hives. Once again the Second Law asserts itself. When I am asked to work on fixing these expensive hotel properties I never stay in them because of the mold, I always stay in La Quinta Inns4 since their “brand look” is “mission style” and has no interior vinyl. 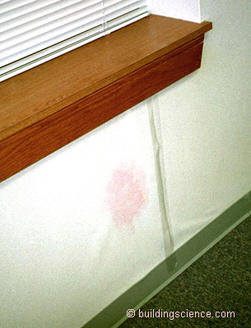 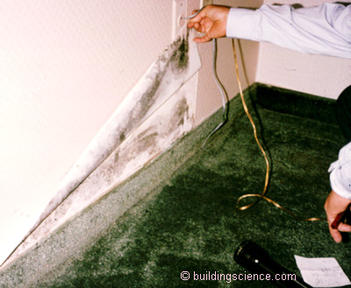 One of the neat things about the Second Law is that you can magnify the effects with sun and storage and turn what most folks consider a hot humid climate problem into a problem everywhere in the Lower 48 States. Problems with reservoir claddings are making homebuilders forget about sub-prime mortgages. Brick, stucco and fiber-cement siding are all claddings that store water after rain exposure—they act as “reservoirs” that are “charged” during a rain event. It is pretty obvious that reservoir claddings can store a significant amount of water at the exterior of a wall assembly. 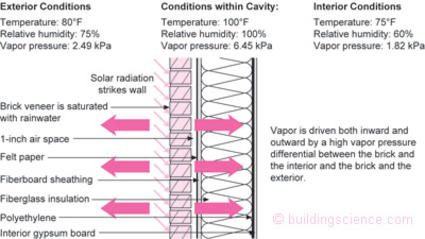 Figure 2: Brick “reservoir” is charged during a rain event and “discharges” both inward and outward magnifying the vapor drives.

Incident solar radiation heats the water stored in the cladding creating a huge vapor drive that is both inward and outward (Figure 2). The vapor drive inward out of a solar heated rain wetted reservoir cladding located in a building in Chicago in July dwarfs by several hundred percent the outward vapor drive in a humidified building located in Barrow, Alaska in January when it is minus 40.5 This leads to summer condensation on the cavity side of polyethylene vapor barriers in places like Chicago (Photograph 9) and Minneapolis (Photograph 10). 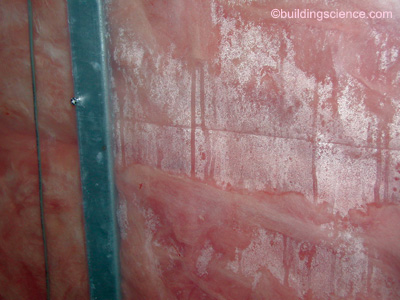 Photograph 9:  Condensation on Polyethylene Vapor Barriers—Solar driven moisture out of reservoir claddings can lead to cavity side condensation on polyethylene vapor barriers in cold climates such as Chicago. 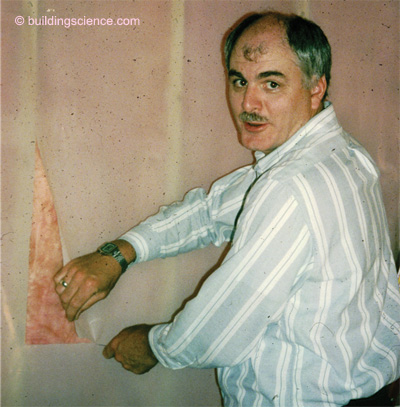 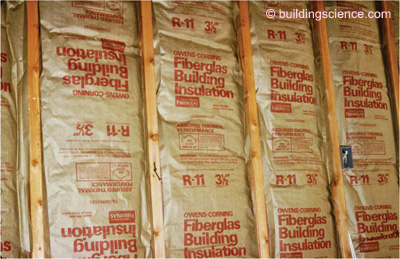 If you think about it, if NASA couldn’t get the moisture goes from warm to cold and more to less thing right, then it should not be surprising that FEMA, HUD, the hotel industry and homebuilders couldn’t either. We seem to forget that there are two sides to a wall and that there are several seasons—two of which are summer and winter and that means that vapor drives go both ways. Once again the Second Law strikes. 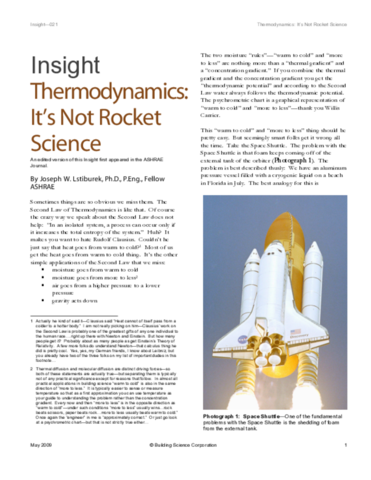