PA-1401: Are You Doing Something Stupid?

Three sprayfoam topics that might have you rethinking your decisions. This article was first published in Sprayfoam Professional, Spring 2014, pages 16-19.

Spray polyurethane foam (SPF) can do stuff that no other stuff can do. So what is it with the family food fight? Low-density open cell is better than high-density closed cell – or is it vice versa? Folks, I have got news for you regarding the open cell, closed cell thing: There is no wrong answer.

For reasons that baffle me, you all have managed to irritate the wood industry – the folks who make OSB and plywood. They are running around saying you can’t put your stuff under their stuff in roof assemblies because if the roof leaks you are doomed. And they don’t care what type of stuff it is. So the more fundamental argument is not an open cell vs. closed cell one. It is roof leaks in general and SPF.

I have played with mock-ups and wetted them and watched them. I have taken apart existing leaking roofs all over the place, open cell, closed cell, SIPs, compact, etc. With the mock-ups and the field experience I have not noticed any difference between open cell and closed cell in terms of detectability and damage with respect to roof leaks. Ready for this? Big leaks always leak enough to be noticed. Small leaks don’t always leak enough to be noticed. SPF type does not affect this. What about SPF and wet roof decks? What about them? Open cell dries faster than closed cell for sure. But the obvious answer: “Don’t spray SPF, regardless of type, on wet roof decks.”

I know you all know the next part. You are not selling a bunch of chemicals. You are selling and installing a system. And the system is a pretty awesome system. The problem is that the system is a pretty awesome system. Yes, no good deed shall go unpunished. Let’s look at what SPF does that became a game changer in the industry and why we all have to be careful. One of the worst things that you could do in a house is install leaky ductwork in a vented attic (Figure 1). So how to fix this? We typically end up with five options. SPF plays a major role in two of them. The best case is a house with an airtight ceiling with a vented attic and code levels of attic insulation and all the ductwork and air handler inside the conditioned space (Figure 2). The moment you put the ductwork in the attic and if the ductwork is leaky and the boots are not sealed and if the attic ceiling is perforated, you get a 30 percent (or more) energy hit on the cooling and heating compared to the best case (Figure 3). This is really, really bad.

You can improve this by having this ductwork airtight with an airtight ceiling and all penetration and boots and stuff sealed. You end up with about a 10 percent energy hit on cooling and heating compared to the best case (Figure 4). Now let’s do buried ducts with SPF. Make the ducts airtight, make the ceiling airtight and insulate the ducts by covering them with lots of stuff (Figure 6). You can cut that 10 percent hit to less than 5 percent. Now you just can’t “bury” the ducts or they will sweat. You have to insulate them with an impermeable layer of SPF and then you can bury them. You need to do this in all climates except in the desert. Of course while you are in the attic with that SPF, why not take the opportunity to seal all those holes that are up there? Nothing works better than SPF for those nasty holes. And then while you are in the house with that SPF, do the other holes. Like the ones between the garage and the house. Tight is right. Figure 5: Ugly Beautiful, Conditioned Attic (above left) – We get the ductwork completely in the conditioned space but we increased the surface area of heat gain and heat loss. This is a 10 percent energy hit on cooling and heating compared to the base case because of the increased surface area. And here is a “heads up”: Don’t buy the argument that you don’t need as much “R-value” when you “cathedralize” the attic. You should install “code levels” of insulation when you do conditioned attics – sloping or flat or cathedral or whatever. Figure 6: Buried Ducts (above right) – Make the ducts airtight, make the ceiling airtight and insulate the ducts by covering them with lots of “fluffy stuff.” You can cut that 10 percent hit to less than 5 percent.

So now we have a part of the business that SPF “owns.” What could go wrong? Well, you can’t use open cell in cold climates on the underside of roof decks because the open cell is too vapor open. The code has it right. Follow the code and you will stay out of trouble. You also can’t use the open cell on the ducts to keep them from sweating. What else? Let’s push the approaches on existing houses. Oops. Any idea how tight you are going to make the house? Real tight. What about combustion safety? What about indoor contaminants? What about the spray process? . . . 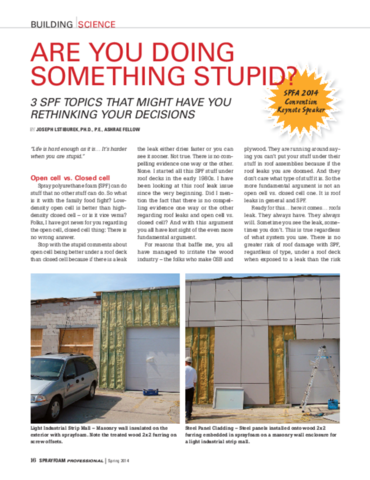