This document summarizes the theory behind thermal insulation and building system heat flow control metrics and presents a literature review of selected research into this area. As the building industry strives to reduce energy consumption for environmental and economic reasons, building enclosures with high thermal performance, reliably and affordably installed in the field are required. The R-value was developed over 50 years ago to provide users and specifiers of insulation with and easy-to-compare, repeatable measure of insulation performance. The strength of the R-value is that it is simple to measure, easy to communicate, and widely accepted.

The R-value was developed over 50 years ago to provide users and specifiers of insulation with an easy-to-compare, repeatable measure of insulation performance. Everett Schuman, an early director of Penn State's housing research institute, is often credited with first proposing (in 1945) and popularizing standardized measures of resistance to heat transfer. R-values were later widely applied to industrial and residential insulating materials and helped consumers make more energy-efficient choices. The strength of the R-value is that it is simple to measure, easy to communicate, and widely accepted.

Over recent decades a much broader range of insulation types, and application methods of insulation have been developed and deployed than were available when the R-value was conceived. As the building industry strives to reduce energy consumption for environmental and economic reasons, building enclosures with high thermal performance, reliably and affordably installed in the field are demanded. The R-value of the insulation products in many of the new building enclosure systems is increasingly unable to measure their actual thermal performance because system effects, sensitivity to construction defects, and airflow can play such a significant role in overall performance.

This document explores the thermal performance of opaque enclosures, and the need for a broader more holistic assessments than the R-value ratings of insulation products alone can provide. Its focus is lightweight framed wall systems insulated with solid body insulation, as this describes the enclosures of the majority of American homes. Although roof assemblies are not explicitly addressed, most of the discussion and research reviewed applies to light framed roofs as well.

Q is the rate of heat flow.
k is thermal conductivity
l is the thickness
T is the temperature difference, and
A is the area through which heat flow is measured.

The R-value is the property of a homogenous layer or assembly of materials that characterizes its resistance to heat flow. R-value is defined by testing an assembly of known area exposed to a known temperature difference:

R is thermal resistance
T is the temperature difference
A is the area through which heat flow is measured, and
Q is the rate of heat flow.

If all heat flow was by conduction, and if all materials where homogenous and exhibited no temperature sensitivities, then it would be appropriate to assume that the R-value was equal to the inverse of thermal conductivity divided by thickness (R = l/k). However, heat transfer through most materials and assemblies is a combination of heat flow by the modes of conduction, radiation, and convection. The R-value measured in Equation 2 is an effective value that lumps all three modes into one metric.

However, radiation varies strongly with absolute temperature, and convection varies strongly with the size of the temperature difference, specimen orientation, and air permeability. Hence, the R-value is valid for specific test conditions, and may be a poor predictor of performance if the conditions of use vary significantly from those of the test. Just as significantly, if insulation is improperly installed, or if a product is installed in an improperly designed enclosure system, the performance of the complete enclosure can be very different than that of the product. In some cases the R-value labeled on a product will control the flow of heat with 1/2 or 1/3 the level expected by many professional specifiers and consumers. Hence there are a number of factors that influence the thermal performance of enclosures other than the R-value of the insulation product. These factors become even more important as high thermal performance enclosures are considered.

Energy concerns became critical to modern society after the first oil shocks of the early 1970’s. During the response to these shocks a large number of energy-saving policies were implemented and it became economical to conserve energy rather than purchase it. One of the results was an explosion in the number of building insulation products. To provide consumers with reliable information about the many competing claims of R-value, the Federal Trade Commission (FTC) developed a rule, “Labeling and Advertising of Home Insulation,” almost universally known as the “R-value Rule.” This rule sets out how to conduct tests on insulation products and how to report the results to the public in terms of R-values.

For almost 30 years this rule has attempted to provide a level playing field for competitors and useful unbiased information for consumers. However, changing technology, better scientific understanding, practical field experience, heightened performance expectations, and a wide range of new products and systems have exposed some of the limitations of applying the FTC R-value Rule.

The FTC rule lists a number of ASTM test standards that are acceptable for use in determining R-value. There are several requirements for specimen preparation, having to do with aging of foam plastics and settling of blown insulations. The FTC requires that the tests must be conducted at a mean temperature of 75 °F (23.9 °C).

The most common thermal property testing methods are listed in the FTC rule, and these methods are used for many building products. These standards are:

Standards C177 and C518 are by far the most commonly used, as they can be quickly completed using small easy-to-handle samples (typically 12”x12” to 24”x24”). These test methods use an apparatus that places an air-impermeable hot and cold plate in direct contact with the test sample. In almost all cases, the specimens are installed horizontally. In the C177 standard, the energy required to maintain the hot plate at the target temperature is measured and used in Equation 1. In the C518 Standard, a heat flux transducer in series with the specimen is used to measure the heat flow across it and the specimen as target temperature conditions in the plates are maintained. 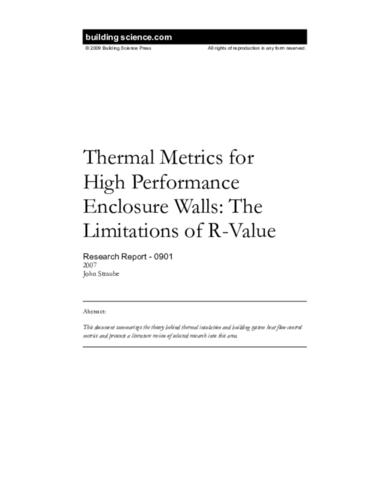