Many concerns, including the rising cost of energy, climate change concerns, and demands for increased comfort, have lead to the desire for increased insulation levels in many new and existing buildings. More building codes are being modified to require higher levels of thermal control than ever before. This report considers a number of promising wall systems that can meet the requirement for better thermal control. Unlike previous studies, this one considers performance in a more realistic matter, including some true three-dimensional heat flow and the relative risk of moisture damage. For more information, see Popular Topics/High R-Value Walls.

Many concerns, including the rising cost of energy, climate change concerns, and demands for increased comfort, have lead to the desire for increased insulation levels in many new and existing buildings. More building codes are being modified to require higher levels of thermal control than ever before. This report considers a number of promising wall systems that can meet the requirement for better thermal control. Unlike previous studies, this one considers performance in a more realistic matter, including some true three-dimensional heat flow and the relative risk of moisture damage.

In some cases, increasing the quantity of insulation may result in an increased risk of moisture-related issues when the exterior surfaces of the enclosure are kept colder in cold weather, and the interior surfaces are kept cooler in warm weather. This may result in increased condensation, and increased freeze thaw potential or decay potential of the assembly in different situations. Analysis is required to predict the potential hygrothermal risks due to increasing the amount of insulation (R-value) in the enclosure.

High R-values for framed wall assemblies are defined here as ranging from approximately R18 to R40 and above depending on the geographic location and climate conditions. A high R-value wall in the south will be considerably less than a high R-value in a cold climate. The analysis in this report includes a summary of historical wall construction types and R-values, current construction strategies, as well as walls that will likely become popular in the future based on considerations such as energy and material availability.

Previous work, largely stemming from research in the 1970's and 1980's, involved postulating newer assemblies with improved R-values. R-value was, and often still is, defined as the "clear wall" R-value (no framing effects accounted for) or the total amount of insulation installed in the assembly. The increased moisture risks were rarely considered.

A study currently being conducted by the National Research Council of Canada (NRC) is investigating and developing durable and energy efficient wall assemblies for Northern Canada. In the first stage of the NRC study, meetings with the northern communities and investigations of the houses were conducted. A literature review covering selection criteria for possible envelope assemblies in Northern Canada, current wall systems and systems to consider was written (Saïd 2006). Walls are currently undergoing extreme temperature testing in the NRC laboratory in Ottawa, Canada. All of the walls being tested by the NRC are constructed with a polyethylene air and vapor barrier and none of the walls are constructed with exterior insulation (Rousseau, et al. 2008).

The Cold Climate Housing Research Center (CCHRC) of Alaska has conducted field monitoring tests on different wall systems, specifically to assess the moisture-related performance of high performance wall systems. Several tests were conducted on a test hut at the University of Alaska Southeast, in Juneau AK (8574 HDD65 or 4763 HDD18) (Smegal and Straube 2006), and others were conducted on the CCHRC main office building in Fairbanks Alaska (13980 HDD65 or 7767 HDD18) constructed in 2007. Streaming data and wall drawings can be viewed on the CCHRC website showing the thermal performance of the wall systems (CCHRC 2007). CCHRC also successfully completed construction of a high R-value house as part of the Building American program in Haida, AK, and the report can be found online (BSC 2008).

Some of the walls for this high R-value study were chosen based on the literature review of the NRC report, and references to construction techniques from both the NRC and CCHRC will be made throughout this report. Some walls have been built by niche builders since the early 1980's.

The objective of this study is to identify highly-insulated building enclosure wall systems based on selected criteria, resulting in a durable affordable, and resource efficient enclosure that provides a comfortable living environment in different climate zones. This report will present the analysis of different enclosure wall strategies and present their advantages and disadvantages according to several comparison criteria.

This study is limited to wall systems for cold climates.  Further studies should be conducted to address other components of the building enclosure such as roofs and foundations.  In general, only cold climates are considered in this report since enclosures in cold climates benefit the greatest from a highly insulated building enclosure, but important conclusions can also be drawn for other climate zones.

This study examines thermal and moisture control, durability, buildability, cost and material use.  The quantitative analysis for each wall system is based on a two-dimensional steady-state heat flow modeling program and a one-dimensional dynamic heat and moisture (hygrothermal) model. Minneapolis, MN in IECC climate Zone 6 was used as the representative cold climate for most of the modeling, because of the cold winter weather, and fairly warm and humid summer months. In cold climates, a building’s enclosure is often the most important factor limiting heat loss, both in terms of insulation and air tightness.

Because there are a number of variables possible for each possible wall system depending on the local practices, climate, and architect or general contractor preferences, an attempt was made to choose the most common wall systems and make notes and comments about other alternatives during analysis. This list of chosen systems is explained in more detail in the analysis section for each wall system. One of the benefits of using a comparison matrix is that it allows a quantitative comparison when some of the criteria, such as cost may be poorly defined or highly variable. For example, even though the exact costs of different insulations may be uncertain, fiberglass batt insulation is always less expensive than low density (0.5 pcf) spray foam which is less expensive than high density (2.0 pcf) spray foam, so these systems can be ranked accordingly regardless of the actual costs.

Two dimensional heat flow analysis was conducted for each test wall using Therm 5.2, a two-dimensional steady-state finite element software package developed by the Lawrence Berkeley National Laboratory at the University of California. Therm was used to calculate the thermal performance of each of the different proposed assemblies including thermal bridging effects.

In many cases, it is generally assumed that installing an R13 fiberglass batt into a 2x4 stud wall leads to wall performance of R13. This does not take into account thermal bridging of the wall framing including the studs, rim joist and top and bottom plates which allows heat to bypass the insulation decreasing the whole wall R-value. Therm can predict the impact of thermal bridging and determine a whole wall R-value that considers the rim joist, wall framing and top plate(s).

The effect of thermal bridging and different framing details requires a metric more complex than just a single R-value to allow for meaningful comparisons. Five R-values have been and are used in the building industry. Oak Ridge National Labs (ORNL) proposed a number of definitions in (Christian and Kosny 1995). We have found it useful to add some and extend their definitions.

This R-value is commonly referenced in building codes and used by industry. This is simply the R-value labeled on the product installed in the assembly.

The R-value at a line through an assembly that contains the most insulation, and the least framing, typically, the middle of a stud-bay in framed construction.

R-value of an assembly containing only insulation and minimum necessary framing materials at a clear section with no windows, corners, columns, architectural details, or interfaces with roofs, foundations or other walls.

R-value for the whole opaque assembly including all additional structural elements (such as double studs), and typical enclosure interface details, including wall/wall (corners), wall /roof, wall/floor, wall/door, and wall/window connections.

Each of these measures is progressively more realistic. The True R-value is very difficult to measure without field samples.

The whole-wall R-value will be approximated in this analysis.  To accurately calculate this whole-wall R-value, the wall in question was divided into three sections, modeled individually, and then the results were combined with a weighted average.

The R-value of the wall section was simulated in plan view to best represent the thermal bridging effects of wall studs as shown in Figure 1. This section is similar to a clear-wall R-value except that the studs are placed closer together to more accurately represent actual numbers of wood framing elements used in real wall systems.  The height of the wall section for simulation purposes is 92 inches.

The top plate was simulated in section view to assess the importance of the thermal bridging of the top plate(s).  This section was eight inches in height since the thermal effect of the top plate will influence the effectiveness of the cavity insulation in its vicinity. The R-value of this detail was calculated over the entire height as indicated by the red dashed line in Figure 2.

The concrete foundation was included beneath the rim joist to determine the effects of the interface between the foundation and wood framing, but the concrete was not included in the R-value calculation as indicated by the red dashed line in Figure 3. Although Therm is a two-dimensional modeling software it was used to model three-dimensional geometries.  For example, at the rim joist, there are floor joists connected to the rim joist alternating with pockets of insulation.  When this is drawn and modeled in plan view (Figure 4), the effective R-value of just this section through the assembly can be determined.

A fictitious material is then made in the Therm library that has the effective thermal properties of the insulation and floor joists and used in the section profile for modeling of the rim joist system (shown in red in Figure 3).

Once the R-values are calculated for all three sections of a wall system, The Whole Wall R-value is calculated by taking the weighted average of the individual components as shown in the equation below.  The total wall height from the bottom plate to the top plate is nine feet. . . 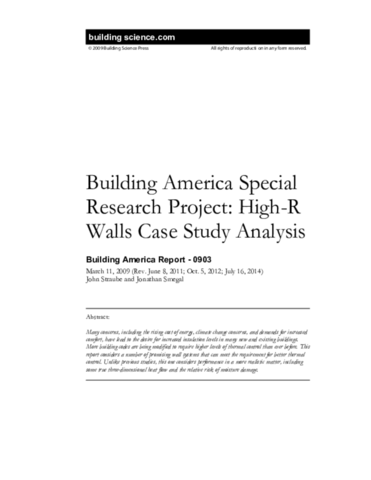