Old mass walls were typically built with really, really good corners, and really, really good openings, but not so good sections in between. You need really good corners or the buildings tend to fall down. Holes in walls also need to be built carefully. You can’t just poke a hole in a wall and expect the wall not to be affected. Builders learned this early on. Large square stones or rocks (“ashlar” blocks or “dressed stone”) were used to make the “corner true and strong.” The corner stones were referred to as “quoins.” Nicely, carefully cut stones were also used to line openings. The tops of openings tended to be a big deal. Builders learned to use “arches” to span openings and arches were finicky things that needed carefully cut stones. This “arch” thing turned out to be something pretty important—but that story is for another day.1

But builders being builders, didn’t matter what the century, cheapened the rest of the wall when they could get away with it. Roman and Greek owners were just as annoyed at their contractors as some of us are at ours today. Of course the other side of the “quoin” was also true, Roman and Greek owners didn’t want to spend much money either. Sound familiar? So the sections in the field of the wall between quoins were typically constructed with “rubble.”

If you were rich like a King or a Pope you could have the entire wall built with nice carefully cut stones with nice tight joints. And if you were a real big dog King and a really rich Pope—and you weren’t cheap—you could afford to have your wall many layers thick with each layer being constructed of nice carefully cut stones with nice tight joints with every joint off-set horizontally and vertically (Photograph 1). Alas, Kings and Popes often tended to be cheap. Building multi layer assemblies out of shaped rock with nice tight joints—well—that really “rocked.” Too bad not much stuff was built that way. The stuff that was built that way lasted, and will last almost forever. “Forever,” is a pretty nifty “useful service life.” 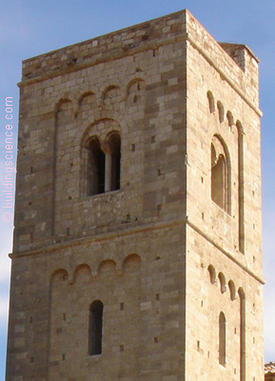 Photograph 1: Multi Layer Stone Wall—A stone wall many layers thick with each layer being constructed of carefully cut stones with nice tight joints with every joint off-set horizontally and vertically.

Sometimes builders gave their clients a nice outer layer and a nice inner layer and threw a lot of stuff (i.e. “rubble”) in between. Even more often, clients only got good stone corners and good stone lined “punched” openings with rubble comprising the majority of the wall (Photograph 2). 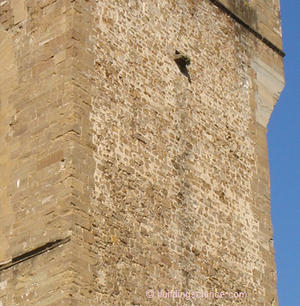 Unfortunately these composite stone-rubble walls tended to leak and the leakage tended to make the wall look bad and then over time the wall tended to fall apart. When water gets into something bad things happen. This was very bad if the building was a castle. It was not a good thing to annoy a king. It became pretty common to stucco over castle walls so that the stucco protected the mortar in the joints in particular and the wall in general. The “White Tower” of the Tower of London got its name when Henry III had it stuccoed and whitewashed to keep the water out. “White Castle” in Wales got its name from the protective layer of white stucco applied to the stone-rubble walls. The stucco was typically applied principally to the rubble “infill” between the quoins (Photograph 3). Eventually even the quoins got stuccoed and the original function of the quoin was lost and quoins became aesthetic rather than functional. 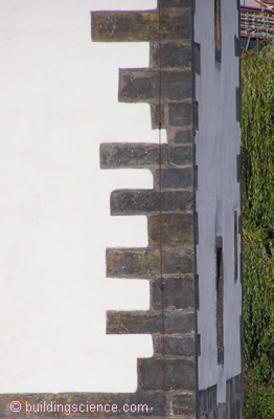 Photograph 3: “Traditional Stucco”—A protective layer of white stucco applied to a stone-rubble wall. The stucco was typically applied principally to the rubble “infill” between the quoins. Eventually even the quoins got stuccoed and the original function of the quoin was lost and quoins became aesthetic rather than functional.

From the middle ages onward stucco became the repair material of choice to address leaking walls and deteriorating walls regardless of whether the walls were stone, stone-rubble, stone-brick or all brick or combinations between. Over time almost all of Europe “got stuccoed” (Photograph 4). 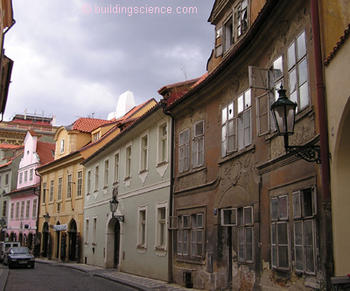 Photograph 4: “Got Stucco”—In Europe stucco has a wonderful reputation and is associated with addressing problem buildings experiencing rain leakage. Over time most of Europe got “stuccoed.”

How did this happen? In short, confusion between “mass walls” and “drained walls.” Mass walls are “massive” and control rainwater entry by shedding, absorption and redistribution. They are constructed from water resistant assemblies such as masonry, concrete, mutli-wythe brick and stone and are typical construction in Europe.

“Drained walls” have multiple layers with drainage spaces and drainage layers located behind an “exterior screen” or “cladding.” The are typically wood frame or steel frame and have a drainage plane such as a building wrap (“tar-paper” in the old days) behind a brick layer, or a metal cladding or a wood-based siding. Wood frame and steel frame assemblies are water sensitive. “Drained walls” are typical construction in North America.

Bottom line, in North America we learned that drained claddings are necessary over water sensitive materials.2 What is the significance of this? If you were to import a “mass wall” approach from Europe and use it with water sensitive materials you could get into a world of hurt—and that is what happened when EIFS (“exterior insulation finish systems” aka “synthetic stucco”) came to North America. The EIFS industry took a successful European approach where stucco was applied over foam insulation that in turn was attached to masonry, concrete or stone and in North America applied to wood and steel frame walls covered with Oriented Stand Board (OSB) or gypsum board.

In Europe, if this “insulating stucco” leaked a little bit, the water entered a masonry or concrete or stone assembly which was not affected by the water in any meaningful way. In fact, the “insulating stucco” worked just like the traditional European stucco repair approach—only better—and reduced water entry into the mass wall while also increasing thermal resistance.

In North America when the same “insulating stucco” was installed over OSB or gypsum board and a little bit of water entered the result was dramatically different. The water that got it was not absorbed and redistributed without damage as in the European mass wall approach. Water that got in could not get out and since the materials that comprise the wall were water sensitive, significant damage occurred. The stucco industry suffered a pretty impressive black eye. 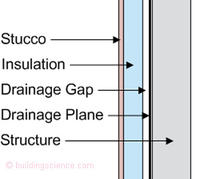 Figure 1: Insulating Drained Stucco—A stucco that is both drained and insulating—“wow, tastes great and is less filling.”

What can we do today if we took the lessons—good and bad—from Europe and North America and applied them to today’s old buildings? You can’t get worse than the building in Photograph 5—an uninsulated mass wall in Boston that is leaking rain, is cold, is uncomfortable, is an energy pig and is ugly to boot. Photograph 6 is what you can do if you have a great architect (Bruner Cott). Add overhangs, a pitched and vented roof, and a “stucco screen” that would make both Vitruvius and Henry III proud (Figure 2).

Be prepared to see a resurgence of stucco “over cladding” in North America. The over cladding stuccos need to be drained. And drained and insulated is even better. EIFS is coming back, and coming back in a good way, and just in time because we have lots of old buildings that are going to need it if we are going to be serious about this climate change, green and energy security thing. 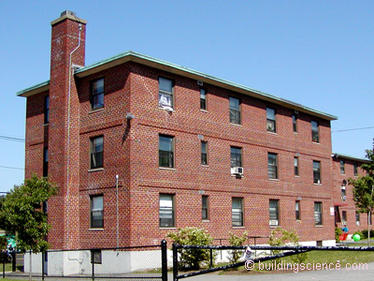 Photograph 5: Face Lift Needed—Uninsulated mass wall in Boston that is leaking rain, is cold, is uncomfortable, is an energy pig and is ugly to boot. 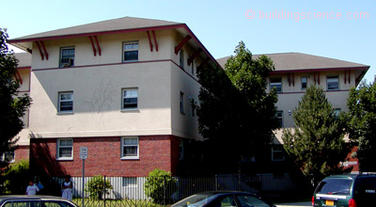 Photograph 6: Saving A Building—Add over hangs, a pitched and vented roof, and a “stucco screen.” 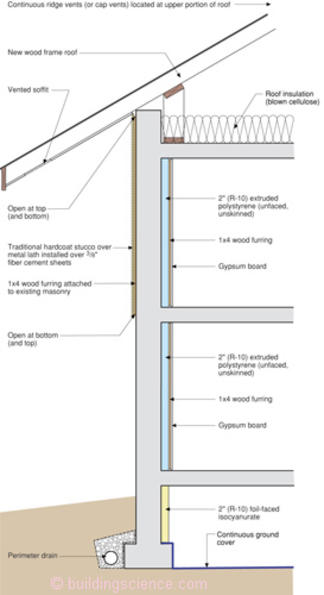 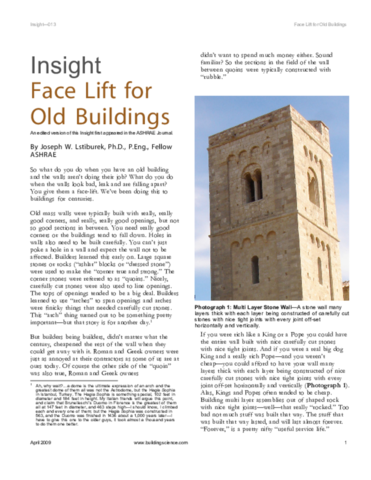