You have got to love salesmen. They figure things out way before physicists, usually before engineers and certainly before greenie weenies. Harry Tschumi and Les Blades,1 a pair of salesmen from Arkansas figured out in the 1960’s that if you increased insulation levels and improved window performance you could sell heat pumps that actually would work in houses. They found that heat pumps didn’t work in houses with lousy building enclosures. Why? They cost too much to install and too much to run because they had to be big to compensate for the lousy building enclosure. It’s not that they didn’t work “technically”—it’s that they didn’t work economically. They found, what we should all know, that it is much more cost effective to fix the enclosure so that the actual system that you need is small and therefore does not cost much to install and does not cost much to operate. Oh, by the way, this approach also saves energy. Who knew?

Apparently, the lesson still has not caught on. How else to explain the silliness with geothermal and photovoltaic panels? Architects just love geothermal—next to PV—it is the technology du jour. But what I see is just another gadget to bolt on to a building that should have never been built in the first place—more technology to try to justify poor enclosure design and poor architecture. In my experience every dollar spent on conservation technologies saves two or more dollars on sexy equipment such as geothermal. In fact, I’ve come to the conclusion that we can get far enough with conservation that the PV rarely makes sense2—except as a social statement. Which is ok by me, because I love to make social statements myself, but at least I know when they are social statements. I also don’t try to get the taxpayers to subsidize my social statements.

This conservation thing should not be news. This was all figured out long before by some pretty smart folks, some of who are still alive, who are still smart, but mostly bemused at what passes for green today. Let me first define what green should be focused on if I was in charge: 80 percent energy, 20 percent everything else like water and materials. The new “golden mean”—80:20—perfect harmony and proportion for buildings and the built environment.

“The new “Golden Mean”—a ratio of 80 percent energy concerns and 20 percent everything else.”3

If you want to design a green building program or a green building this is what your priorities should be. The single most important aspect of green should be energy. OK, I feel better now that I’ve once again pointed out the obvious. Let’s move on and get re-acquainted with those smart old folks I mentioned.

One of those smart old folks was Wayne Schick4 at the University of Illinois at Urbana-Champaign.  He pushed the Tschumi-Blades “revelation” to a whole different level with the “Lo-Cal House” in 1976. “Lo-Cal” stood for “low calorie.” Mr. Schick did a computational study of how much energy you could save with high levels of thermal insulation, airtight construction and heat recovery ventilation using air-to-air heat exchangers (1). The Lo-Cal House sure got folks attention. The insulation values Mr. Schick proposed were R-60 ceilings, R-30 walls and R-20 crawlspace floors. Folks said no way.

Then a bunch of Canadians—Dave Eyre, Bob Besant, Rob Dumont and Harold Orr all out in Saskatchewan—Canada’s fly over province—built the Saskatchewan Conservation House in Regina in 1977 (2)(3)—and the “no way” became history. The house had R-60 ceilings, R-44 walls (12 inches thick, double wall construction) and R-20 shutters over standard double glazed windows. It was also ultra-tight and featured an air-to-air heat exchanger for ventilation.5 Build tight—ventilate right was born.6

The big news at the time that didn’t seem to resonate with the solar folks for obvious reasons—was that the active solar collectors that were bolted on the Saskatchewan Conservation House were a bust; they weren’t needed even when they actually worked. It was even more gruesome for the passive solar folks; there wasn’t a bunch of thermal mass and lots of south facing glass in the house. No Trombe Wall, no tubes of water in the living room, no phase change salts, no dark ceramic tile floors. It's just a house with boring technology—lots of insulation, airtight construction, controlled ventilation and not a lot of windows. The good news for the architects was that it was ugly and looked weird—but not architect weird, rather engineering weird, and as such could be ignored.

Meanwhile, the Canadians weren’t resting on their laurels, they went out and built 10 houses in 1980 in Saskatoon, Saskatchewan that also didn’t look weird. They looked normal as well. The Crazy Canucks took the lessons of Eyre, Besant, Dumont and Orr and applied them to a small subdivision. This lead to the development of Canada’s R-2000 Program and the construction of a couple of thousand of extremely well insulated, airtight houses with controlled ventilation and not a lot of windows in the 1980’s.

And then…nothing happened. In Canada the R-2000 Program became a boutique program which was pretty much ignored by mainstream builders. In the United States, after the Leger House, nothing pretty much happened either. We do have the Building America Program, but we’re not building a heck of a lot of efficient houses. We say the houses are efficient, but they are not when compared to the groundbreaking projects of the 1970’s.

With all that we now know couldn’t we do something special? Like the old guys did? Couldn’t we build on the lessons learned from Canada’s R-2000 Program and America’s Building America Program and the stuff Eyre and Leger did? Well, architect Betsy Pettit did.8 She designed the Westford House. In a sweet link to the past it is located only a couple miles from Gene Leger’s masterpiece.

What did the Westford House teach us? It got us a set of performance metrics that are matched with current materials and current understanding of building science. The core design is good for all climates. It is of single wall construction with insulating sheathing. In more moderate climates just peel away some of the exterior insulation layers on the exterior walls and roof—all that changes is the thickness of the insulating sheathing. It won’t win any awards. It just works. It doesn’t need PV—but if you want to make a statement go right ahead—and now I wouldn’t bust your chops because you’ve earned the right to make the statement. Geothermal would work great where gas is not available—the trick is finding a small enough geothermal system. Harry Tschum, Les Blades and Frank Holtzclaw would be proud. 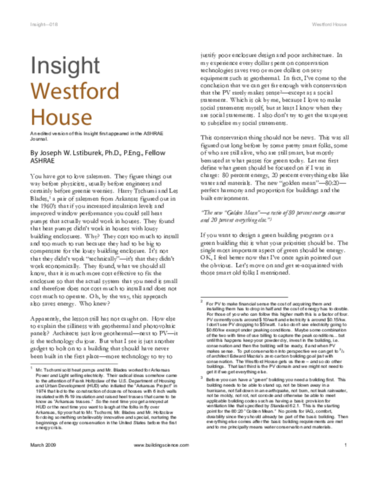