“When you insulate your basement on the inside, the rubble foundation will freeze apart, and you will get swelling from the freezing soil collapsing the wall, and adfreezing will lift the wall so high you will need a ladder to get down from the sump pit.”

In case it is not obvious yet, we are going to be dealing with ground frost penetration and basement foundations. For all of you who live where lakes and ponds never freeze over, don’t worry about any of this. Insulate your basement and be done.

I will go further and say nothing bad will ever happen to foundations in areas where lakes and ponds freeze over, but where extreme frost penetration does not go deeper than 60 in. (1524 mm)2  (see map in Figure 1). In fact, even regions with extreme frost penetration deeper than 60 in. (1524 mm) rarely have problems with foundations. But the stories persist, and rumors abound mostly because there is usually a tenuous link to some observed phenomenon that has a basis in fact.

Figure 1: Map of Extreme Frost Penetration (from the U.S. Army Corps of Engineers).

When water freezes, it experiences an increase in volume of about 9%. Most folks know this; even Wikipedia manages to get this right. So, the thinking goes that if saturated soils freeze they will expand and exert forces on foundations and collapse them. However, it does not work that way. A couple of real-world observations rear their interesting heads. Frost heave can be far greater than 9%. It can be thousands of percent, in fact tens of thousands of percent. More about that later. In the real world, frost expansion is not uniform. It is in the direction of the heat loss. Memo to everyone reading this—this is a huge insight. Let me repeat this, expansion is in the direction of heat loss (Figure 2). 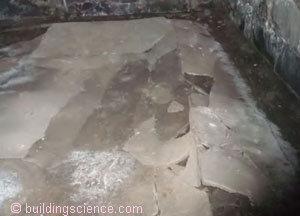 Photograph 1: Slab Heaving in Unheated Basement—So why didn’t the walls collapse inwards and only the slab buckled upward? Easy, the ground beside the foundation wall was not wet, only the ground under the slab was wet. Another “ah ha” moment. You need wet soil for frost heave. Not only do you need wet soil, you actually need “frost-susceptible” wet soil. A miserable type of soil with an annoying distribution of fines. The size of voids in a soil determines its frost-susceptibility. More than 3% grains finer than 0.02 mm in diameter by weight usually are a problem.

Frost heave, when it happens, can be huge. Frost heaving is due to the growth of ice crystals not due to a change in the volume of frozen water. The ice crystals under freezing conditions draw water from the surrounding soil and develop into ice lenses.3

The growth of ice lenses can be quite phenomenal. At the freezing plane, water is turned into ice, desiccating the soil beneath it. More water is drawn to that location to replace the liquid water that was removed due to a concentration gradient and, according to Penner, “pressure is developed so that the ice and soil above it are lifted.” How high can frost heave lift the soil? In the lab, it’s not so high (Photograph 2). But in the real world where nature is involved? It’s impressively high. Read on.

Photograph 2: Frost Heaving in the Lab (A sequence of Photographs courtesy of the American Physical Society from a paper by Ozawa, H. 1997. “Thermodynamics of frost heaving: A thermodynamic proposition for dynamic phenomena,” Physical Review E 56(3):2811 – 2816).

Frost heave can be so impressively high in Canada that we have a special name for it: “pingo,” and we put it on our stamps (Photograph 3). Pingo is an Inuit word for the conical hills caused by frost heave typical to the Mackenzie River Delta in the Northwest Territories near Tuktoyaktuk. A pingo is frost heave where nature decides to show us puny humans a thing or two. The Ibyuk Pingo is thought to be the largest on earth and is approximately 150 ft (46 m) tall (Photograph 4). Think of it as a giant dirt-covered snow cone. 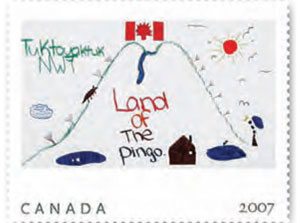 Photograph 3: Canadian Stamp. Tuktoyaktuk, Northwest Territories, land of the pingo—Who else but Canadians would revere frost heave enough to put it on a stamp? 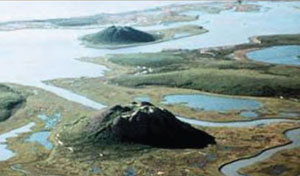 As impressive as frost heave can be, as far as buildings go, who cares about how high frost heave can go if the direction of heave is upwards? Upward heave does not exert inward pressures that can collapse foundations. It is the inward heave that gives us the heavie jeevies. Bottom line, if basements are heated, inward frost heave is not a problem, regardless of whether they are insulated or not. OK, we are done, right? Just heat the basement. Nope, not so fast.

Unfortunately, upward frost heave can be a concern if the ground freezes against the foundation. We call this “adfreezing,” which is short for adhesion freezing. The ground adheres to the foundation wall, and when it heaves upward, it will lift the wall with it. Except, it doesn’t happen with heated basements, regardless of whether they are insulated. But, it does happen in
unheated basements if there is frost susceptible soil and available water. What gives? 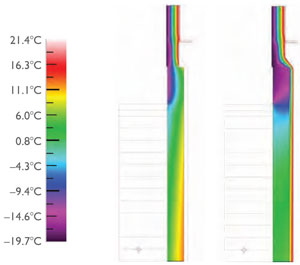 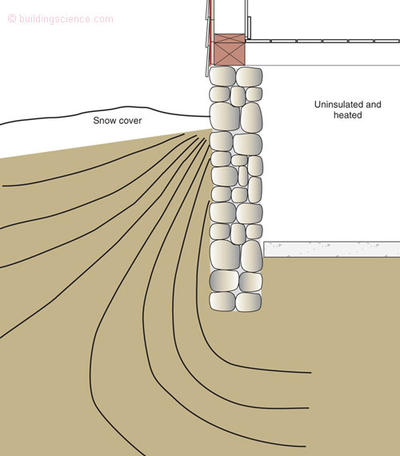 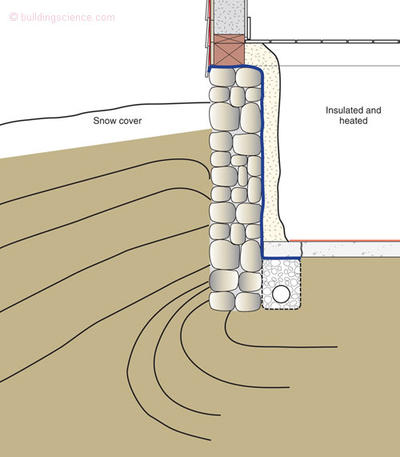 Figure 6: Isotherms in the Ground Adjacent Foundations—The ground temperature profile for a heated and insulated basement. The ground clearly gets colder with the addition of basement insulation. But the key point to remember is that the gradient does not change when the basement is heated. The heat flow is greatly reduced, but the direction is still the same.

But what if I do not want to heat the basement? Easy, reduce the heat loss of the ground to the atmosphere. Add a skirt of insulation around the perimeter (Figure 7). How wide should the skirt be? What should its thermal resistance be? Questions, questions, questions. The answer is, no surprise, based on experience. The skirt width should be equal to the average frost depth, and the R-value should be based on the freezing degree days. These are typically specified in codes governing shallow frost protected foundations. When in doubt, pick R-10 or greater. 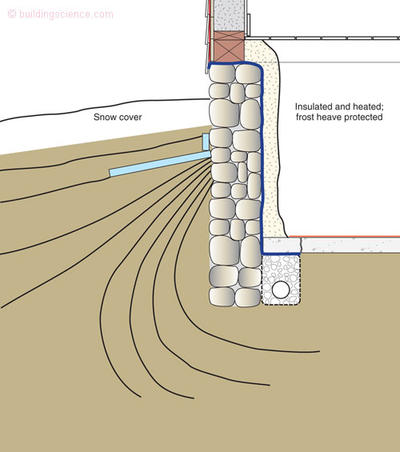 Figure 7: Insulation “Skirt”—The skirt width should be equal to the average frost depth and the R-value should be based on the freezing degree days. These are typically specified in codes governing shallow frost protected foundations. When in doubt, pick R-10 or greater. Or go to the source:, Robinsky, I., K.E. Bespflug. 1973. “Design of insulated foundations.” Journal of the Soil Mechanics and Foundations Division 99(9):649 – 667. 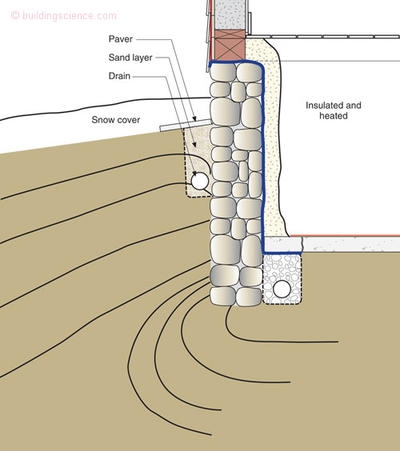 So, why in cases where we have unheated foundations and frost susceptible soils we still don’t have many problems? Well, mostly luck and some unexpected and under-appreciated drainage. With many rubble foundations, we dodge the adfreezing bullet and lateral frost heave forces because the rubble foundation wall is a pretty good drainage medium (Figure 9). 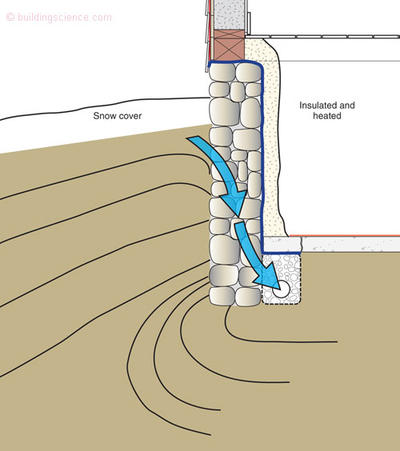 Are we done yet? Nope, not quite. We haven’t discussed the most obvious problem. The footings must be below the frost depth. We absolutely do not want frost getting under the footings and pushing them up. We’ve had this part figured out for a long time and it’s reflected in codes and regional practice. That’s the good news. But, there is a bit of concern. Local frost depth, my definition of local frost depth is the zone “right beside the foundation,” does increase marginally with the addition of basement insulation. But not enough to worry about, I think, based on experience (and a pretty nice bit of research done in the 80s).5

So put away your ladder when you insulate your basement in cold climates. You won’t need it to climb down from the sump pit, that is if you heat your basement or if you control groundwater and the presence of frost susceptible soils, or if you install an insulation skirt. Oh, one more point, none of this changes if the insulation is on the outside of the foundation or the inside of the foundation wall. Be happy, don’t worry, insulate that foundation wall. 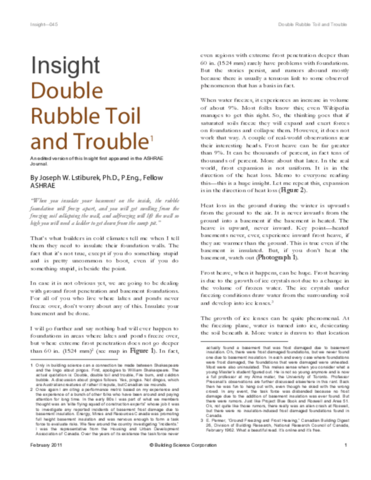