Now housewraps are amazing materials. They have two seemingly contradictory properties: they retard the passage of water in the liquid state while freely allowing the passage of water in the vapor state. How they accomplish this is elegant simplicity that
takes advantage of the differing behavior of water molecules in the two states. Water molecules in the liquid state cluster together creating “water polymers” that act as large molecules. However, water in the vapor state is actually individual water that may be close together or far apart depending on their concentration. The holes in housewraps are large enough to permit the passage of individual water molecules in the vapor state but small enough to retard the passage of the clustered molecules of liquid water. But housewraps are not a “magic wonder material” that should be used everywhere without thought. Like all materials, you have to pick your spots.

Brick veneers pose a special challenge in wall design and performance because they are reservoir cladding systems. When they get wet from rain they act like a reservoir or sponge. Wet brick can then get heated above ambient temperature by solar radiation creating a powerful inward acting concentration gradient and thermal gradient. These gradients are exacerbated by air conditioning (cooling and dehumidifying the interior).

A good analogy would be to consider the brick as a moisture capacitor that is charged during a rainstorm and that subsequently discharges in the direction of the temperature gradient and the concentration gradient. The magnitudes of these forces are huge. In fact typical psychometric charts will not work – you have to go to the Steam Tables. See the Moisture Control Handbook (pg. 65). This was first documented by Grant Wilson’s work with the Division of Building Research, National Research Council of Canada in the mid 1960’s and has been referenced by every ASHRAE Fundamentals Volume over the past 35 years (pg 24.8, 2001 ASHRAE Fundamentals Handbook).

You would have to be insane to recommend a vapor permeable assembly behind a rain wetted reservoir cladding system experiencing these kinds of drivers. Now, in fairness to a 50 perm housewrap, it works well when it’s installed over a 1 to 2 perm OSB sheathing behind a brick veneer. It’s another story when the 50 perm housewrap is installed over a 15 perm fiberboard or a 25 perm gypsum sheathing. With the OSB, the water vapor is stopped at the outside surface of the OSB and then migrates back outwards through the housewrap into the airspace behind the brick veneer when the gradients reverse. With the fiberboard and gypsum sheathing the water vapor blows right through the assembly into the wall cavity where it causes mischief.

Now let’s get a little more complicated. The #30 felt doesn’t cover itself with glory in the same application described above. It changes its permeability as its moisture content goes up. It is a hygroscopic material. Depending on how well vented the
brick veneer cavity is (actually, the correct phrase is depending on how poorly vented the brick veneer cavity is), the #30 felt increases in permeability as it picks up moisture to match the permeability of the housewrap. So installing #30 felt over fiberboard or gypsum sheathing is not necessarily a big improvement over installing housewrap. However, installing #30 felt over OSB works well (and so does the housewrap).

Housewraps can be used as both drainage plains and air barriers. Installing foam sheathings over housewraps also provides a resistance to inward vapor flow. Impermeable foam sheathings work well with permeable housewraps. It’s hard to beat that combination behind a brick veneer.

Water penetrated the stucco, ran down the face of the debonded building paper and out of the wall at a flashing location. The building paper didn’t stay wet long enough to get into trouble. Drainability was improved by providing two layers of felt or by
going to coated papers (coated papers don’t bond as well to stuccos as do impregnated papers) or by doing both. Two layers of coated paper are the norm in most parts of North America.

The Vancouver stucco problem was due in part to the lack of drainage between the hardcoat stucco and the building paper drainage planes. Papers remained bonded to the hardcoat stuccos. Water stayed in the system and the building papers (as well as other things) deteriorated. It seems that the more recently manufactured building papers don’t work as well as the old stuff in that they don’t debond as easily. Unlike Seattle where two layers of paper were common, only one layer was the norm in
Vancouver. No drainage space, no drainage. No drainage, big trouble. Rot city.

Now let us replace the building paper in a hardcoat stucco application with a housewrap. What a disaster. The hardcoat stucco bonds to the housewrap. No drainage. Water stays in the system. It passes through the housewrap in the vapor form as well as by capillary transport. It gets worse. The housewrap loses its water repellency due to the surfactants in the stucco (additives such as soaps, plasticizers and colorants.) At least with the impregnated or coated paper you stand a chance. Sometimes the paper debonds, sometimes it doesn’t. If you’re smart you use two layers of paper and the system pretty much works. You stand no chance with housewrap by itself. 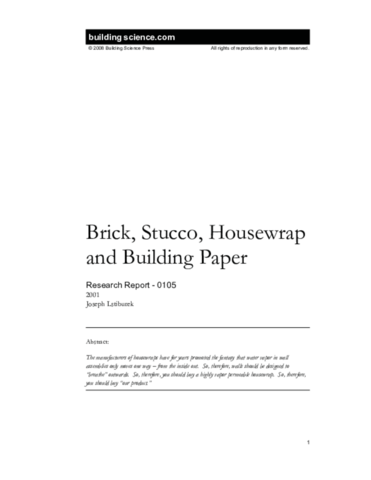