This report expands on Building America Report 1109 by applying the experimental apparatus and test method to dense-pack retrofit applications using MFI materials. Three fiberglass insulation materials and one stone wool insulation material were tested, and the results compared to the cellulose results from the previous study. Test wall specimens were prepared to cover densities in the range of roughly 1.8–2.5 pcf. Three installation methods were tested, based on a survey of installation instructions provided by a sample of five fiberglass manufacturers: (1) bottom fill, using an insertion tube installed up through a hole at approximately 24 in. above the bottom plate; (2) top fill, using an insertion tube installed down through a hole at approximately 6 in. below the top plates; and (3) 2-in. nozzle, installed through two or three holes (e.g., at holes approximately 24 in., 72 in., and 90 in. above the bottom plate).

Airflow resistance varied significantly between loose-fill fiberglass products, even though all the compared products are marketed and supported for use in dense-pack retrofit applications. When these fiberglass products were installed at approximately 2.2 pcf, the variance was 0.33–1.73 cfm50/ft2. The distribution of the installed material and thus, the airflow resistance also depend on installation method.

Two of the three loose-fill fiberglass products tested (installed at approximately 2.3 pcf) produced long-path flow rates of 0.28 and 0.42 cfm50/ft2 and short-path airflow rates of 0.76 and 1.1 cfm50/ft2. These are comparable to the cellulose dense-pack retrofits benchmarks of 0.33 and 1.0 cfm50/ft2 for the long- and short-path airflow rates, respectively (cellulose fiber insulation installed at 3.5 pcf as required by Building Performance Institute). However, the fiberglass test walls were prepared using the 2-in. nozzle installation method, not the insertion tube methods recommended as best practice for retrofit applications. These results indicate that there is potential for dense-pack applications of MFI, but that more work needs to be done to develop appropriate standards for real-world installation needs. In particular, further testing should be conducted to establish recommended install densities for insertion tube installation methods.

More specifically, testing is needed to support the development of two new standards by the Building Performance Institute (BPI): BPI-102, which will set requirements for the airflow resistance of insulation used in retrofit cavity (dense-pack) installations, and BPI-103, which will define acceptable test methods to measure the airflow resistance of insulation materials used in dense-pack applications.

To begin sample selection, five fiberglass insulation materials were identified as intended for and/or used in retrofit wall applications:

We collected six or more sample bags of each fiberglass retrofit product from the respective manufacturers. Appendix A includes manufacturer’s literature for each of the products. Three fiberglass products were randomly selected from the five products collected.

Four stone wool insulation manufacturers produce granular/loose-fill products in North America; however, none of these are intended for or (to the best of our knowledge) used in retrofit wall applications:

The dense-pack mineral fiber tests were performed using the same apparatus and method that were developed for the dense-pack cellulose fiber tests described by Schumacher (2011). The calibration box, electronic scale, test wall assembly, wall balance, and load cell were the same as those used for the cellulose testing in 2011. Only the fiber moving machine and installation methods were changed.

Figure 1 shows the test wall assembly and the two flow paths that are evaluated during testing: the short- and long-flow paths. A fan depressurizes the wall assembly so air is drawn in through the air inlet holes in the back panel. The top and bottom inlet holes are used for long path tests; the upper and lower inlet holes are used for short-path tests. The air travels through the dense-packed insulation and out of the wall assembly at the air outlet slot that is located at mid-height on the front panel. The outlet air is collected in a manifold and drawn through a series of flow measurement devices before traveling through the fan and being expelled to the laboratory. This arrangement maximizes the uniformity of airflow, pressures, and temperatures.

A Krendl Model 450A All-Fiber Machine was used to prepare the cellulose fiber test wall specimens that Schumacher (2011) described. Several fiberglass test wall specimens had been prepared using this machine in 2011; however, the Krendl 450A did not have appropriate mixing paddles and shredders to properly condition the fiberglass material for dense-pack applications.

For the purposes of the mineral fiber dense-pack tests we sought to identify and secure a single machine that could be used for all planned tests. Members of a manufacturer experts’ panel from the North American Insulation Manufacturers Association were approached for input, and all agreed that the following small (i.e., portable, not truck-mount) machines were appropriate for dense-packing fiberglass insulation:

A brand new InsulMaxx 2000 machine, pictured in Figure 2, was secured for the preparation of fiberglass and stone wool test wall specimens. The InsulMaxx 2000 has a variable-speed blower, and double agitators (one set of shredders and one set of mixing paddles) suitable for conditioning fiberglass loose-fill products.

Cellulose insulation manufacturers provide few if any special instructions for installing their products in dense-pack retrofit applications. The installation instructions generally reflect those of BPI’s Insulation and Airsealing Technician certification course. These requirements were summarized by Schumacher (2011). Appendix C of this report provides an example of one cellulose manufacturer’s instructions for installing its product in a dense-pack retrofit application. 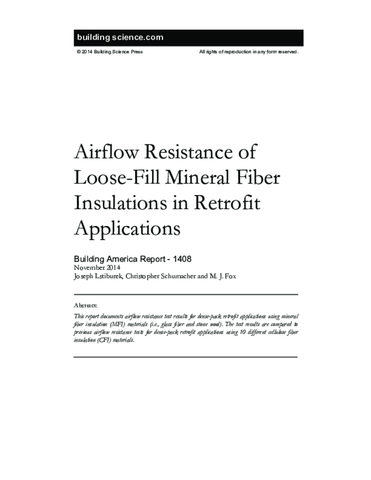