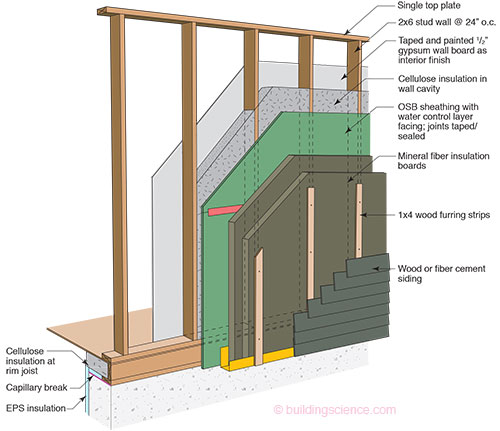 Installed Insulation R-value: Blown or sprayed cellulose insulation in the cavities has a typical R-value of R-20 for 2x6 walls.

Mineral fiber used as the exterior insulation has an R-value of 3.8-4.3/inch.

Whole-wall R-value: Using two-dimensional heat flow analysis with thermal bridging effects and average framing factors (16%) shows increases to the R-value of the assembly and improvements to the efficiency of the cellulose insulation in the stud space by decreasing the thermal bridging effects. Advanced framing walls with 4” of mineral fiber insulation board on the exterior have a whole wall R-value between R-35 to R- 37.

Air Leakage Control: Cellulose is an air permeable material used in the stud space of the wall allowing possible air paths between the interior and exterior as well as convective looping in the insulation. Dense pack cellulose has less air permeance but does not control air leakage. Mineral fiber insulation board is also not air impermeable (unlike EPS, XPS and foil-faced polyisocyanurate board foam). Air control is established at the face of the OSB sheathing with taped seams using an integrated water resistive barrier that is detailed to serve as both a water control and an air control layer.

Rain Control: Rain leakage into the enclosure is the leading cause of premature building enclosure failure. The mineral fiber insulation board, although hygrophobic, is not suitable for creating a water control layer at the surface of the insulation as may be done with foil-faced polyisocyanurate or extruded polystyrene (XPS) insulation boards. Rain control is addressed using a water resistive barrier integrated with the OSB sheathing coupled with taped seams.1 Alternatively, a fluid-applied water control layer can be used over plywood or OSB sheathing

Vapor Control: Wintertime condensation caused by outward vapor drive is controlled in the wall assembly by insulating to the exterior of the OSB sheathing. The ratio of exterior mineral fiber insulation to the total wall assembly insulation is critical to controlling the risk of condensation at the sheathing. The wall assembly manages summertime inward vapor drive through a vented cladding and the water resistive barrier integrated with the OSB sheathing described above which also acts as a vapor retarder. The level of vapor control is determined in the IRC and should be consulted as installing the incorrect vapor control layer or installing the vapor control layer in the incorrect location can lead to building enclosure failure.4

Drying: Mineral fiber insulation board allows drying to the exterior.  Additionally, the wall also is able to dry to the interior. Poly vapor barriers should be avoided so that inward drying can occur. The minimum level of vapor control on the interior surface is determined by the IRC. In this “flow through assembly”, the prescriptive portion of the IRC relating to vapor control allowing omission of a poly vapor barrier is met by installing sufficient mineral fiber insulation on the exterior. Installing a vapor barrier on both sides of the enclosure will seal any moisture into the stud space, resulting in low drying potential, and possibly resulting in moisture-related durability risks. Ventilation behind vapor impermeable claddings and interior components (e.g. kitchen cabinets) can encourage drying.

Built-in Moisture: Care should be taken to build with dry materials where possible, and allow drying of wet materials before close in. Cellulose is often sprayed in damp, and manufacturers recommend drying before close in and moisture content limits.

Cladding can be easily attached to the studs through 1” of exterior insulation. Thicker levels of insulation (>2”) require strapping or furring strips anchored to the framing with long fasteners. Some cladding manufacturers allow their cladding to be fastened to the strapping directly.

Advanced framing wall construction decreases the cost required for framing. Cost of mineral fiber insulation increases with its thickness. Also, with insulation board thicknesses over 11/2”, furring strips would be required for cladding attachment which add to the cost. But there are measurable cost benefits of saving energy, as well as improvements to comfort, which is difficult to quantify.

If advanced framing is applied correctly (single top plates, correctly sized headers, two stud corners, etc.) the redundant wood framing from standard construction is removed, and the amount of framing will decrease. With mineral fiber insulation board thicknesses over 11/2”, furring strips would be required for cladding attachment. 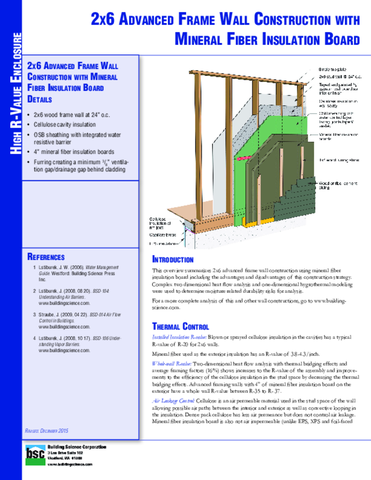