A performance review of residential assemblies in the central Florida (Orlando) area during the three hurricanes in August and September 2004. The specific focus of the review is on the water management details associated with stucco claddings. Two types of stucco claddings were reviewed: "traditional three coat hard coat stucco" and "cementitious decorative finishes." Both are renderings applied to substrates and the fundamental physics apply to both equally.

The specific focus of the review was on the water management details associated with stucco claddings. Two types
of stucco claddings were reviewed: "traditional three coat hard coat stucco" and "cementitious decorative finishes". Both are renderings applied to substrates and the fundamental physics apply to both equally.

The performance of a mass assembly is based on a "rate-storage" relationship. When the rate of wetting exceeds the rate of drying accumulation occurs. Accumulation of water can occur until the quantity of accumulated moisture exceeds the moisture storage capacity of the assembly. The moisture storage capacity is time, temperature and material specific. Under normal conditions the amount of penetrating rainwater through stucco into a masonry block wall is minor and easily absorbed, redistributed and released to both the interior and exterior.

In the mass assemblies water penetrated the stucco via micro cracks (as the water also did in the frame assemblies). Typical paint finishes are unable to span micro cracks. Under normal conditions this is not an issue for the reasons previously mentioned (the huge moisture storage capacity of masonry block assemblies). As stucco buildings age and are successively repainted the water entry is reduced after each layer of paint is added. In general this is why
many older buildings constructed with mass walls performed somewhat better.

In the second floor frame assemblies water also penetrated the stucco via micro cracks. Again, as previously mentioned, typical paint finishes are unable to span micro cracks. In frame wall assemblies it is expected that this penetrating water will be drained back to the exterior. However, in many cases the penetrating rainwater was not drained to the exterior due to adhesion between WRB’s and the stucco renderings preventing drainage between the
stucco renderings and WRB’s, a loss of water repellency of the WRB’s and the lack of effective flashing at the base of the drained assemblies.

The Florida Building Code in Section 2509.2.2 sets out the requirements for WRB’s and stucco renderings applied over wood sheathing. Section 2509.2.2 reads as follows: “Moisture Barrier. Wood shall be covered with 15-1b roofing felt, or other approved equally moisture-resisting layer, and metal reinforcement as set forth herein.” Unfortunately, “equally moisture-resisting” is not explicitly defined in the code by reference to any ASTM standards.
In fact, some of the problems identified in our review are not currently addressed in any existing ASTM standard, particularly the water hold out of WRB’s under the influence of surfactants, or the loss of water repellency due to adhesion, or the drainage characteristics of stucco renderings applied over WRB’s.

There are significant code enforcement issues regarding the construction of flashing at the base of the second floor frame assemblies. Code officials are enforcing a provision of ASTM C1063 (Standard Specification for Installation of Lathing and Furring to Receive Interior and Exterior Portland Cement-Based Plaster) that is not intended to apply where second floor frame assemblies intersect first floor mass assemblies. For reasons that are not explicable or
defensible “reverse flashing” is mandated rather than drainage to the exterior at this location.

The water management of penetrations and openings in stucco claddings were also reviewed particularly window and door openings, and service penetrations.

With respect to window and door openings it is instructive to realize that windows and doors installed in residential buildings in Florida are rated for water holdout at 15 percent of the design wind load and no lower than 140 Pa or approximately 35 mph. These service limits were clearly exceeded many times during August and September 2004. Windows and doors are expected to leak during hurricanes; they are not expected to blow out.

However, our testing indicates that many windows leaked at conditions well below their rated value – i.e. under no wind condition.

The method of testing windows is specified in ANSI/AAMA 101 – specifically ASTM E 547. The ASTM standard clearly views leakage at corners to constitute failure, however, it is our contention that the mounting frames used by many window testing groups in the testing of windows for compliance to the ASTM standard obscure the view of corners and subsequently many windows are listed as passing this test when in fact they fail.

Additionally, many windows are sold as “mulled” or double windows or composite windows. However, they are tested as single units. Every mulled window unit tested leaked with no applied wind load.

Anecdotal evidence indicates that a significant amount of rainwater entered soffit vent assemblies. This is consistent with the physics of the applied wind loads and the geometry of the soffit assemblies. Soffit geometries are currently not designed to address extreme wind driven rain exposures. Additionally, unvented roof designs which can address this mode of rainwater entry are currently not explicitly allowed in the Florida Building Code – although they are allowed in the International Residential Code.

The use of paint as a water management technique for stucco renderings applied to mass assemblies was also examined. As the mil thickness of paint increases, the ability of some paints to span micro cracks also increases. However, this applies primarily to mostly smooth surfaces. Highly textured surfaces are almost impossible to coat in a manner to seal micro cracks.

Finally, as part of our review of the water management provisions of the Florida Building Code we identified a provision relating to roof membranes, Section 1518.3, that appears to make no sense: “If the underlayment is a selfadhering membrane, the membrane shall be applied over a mechanically attached anchor sheet, attached in compliance with 1518.2.1.” This provision encourages roof membrane “blow off” by requiring a bond break between the selfadhering membrane and the structural roof deck. This negates the entire reason to use a self-adhering membrane. The requirement for a mechanically attached anchor sheet under a self-adhering membrane has no basis in physics or logic and prevents the construction of highly water resistant roof assemblies that can provide a high degree of secondary protection during extreme wind driven rain events.

The following recommendations are offered:

The specific focus of the review was on the water management details associated with stucco claddings. The performance of stucco claddings was called into question after the events of August and September 2004, specifically the effect of rain from hurricanes Charley, Frances and Jeanne. 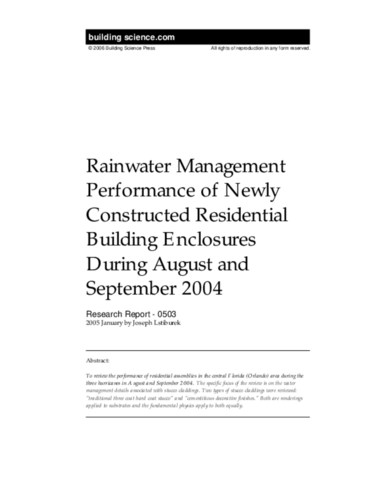