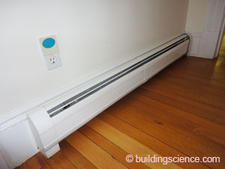 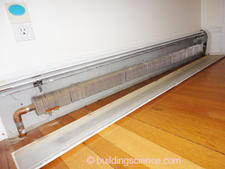 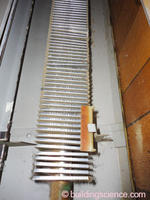 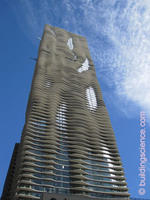 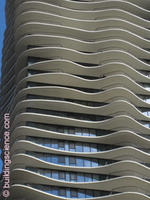 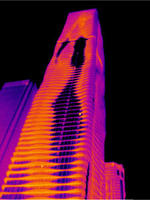 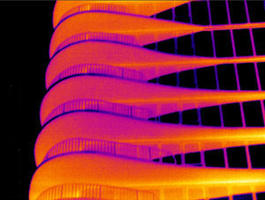 Could it have been constructed differently without the thermal bridges? Without changing the appearance? Sure. It could have been an example of efficiency not just iconic architecture. And that would have been a beautiful thing. With off the shelf stuff no less. How about a true R-5 curtain wall between thermally broken cantilevered slabs? Check out Figure 1 and Photograph 2. Available right here in the good ole US of A. Also, apparently in Serbia (Photograph 3) and pretty much anywhere folks care. Triple-glazed gas-filled curtain walls have been around for a while. Nothing magical there. The thermal breaks have also been around for a while. Mostly in Europe, and in Canada, which seems like Europe lately.3 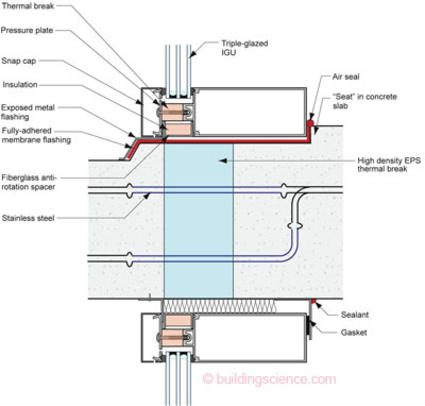 Figure 1: Section At Balcony Glazing Interface – Take a high performance curtainwall and couple it with a high density expanded polystyrene thermal break and some basic slab water control and you have a beautiful thing. No reason why this could not have been done. The argument against is cost of course. But in Chicago in a fabulous building like this? The stunning architecture alone ups the value of the building way beyond the cost of the good glass and the thermal breaks. Hey, I like this building. I am just dreaming of what could have also been… 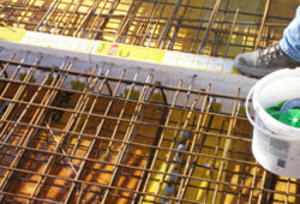 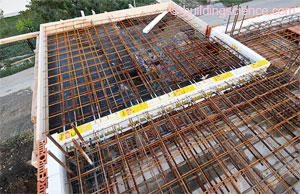 Photograph 3: Belgrade Balcony – Nice view of the Danube River from a thermally broken balcony. OK, the river is out there somewhere. I have not been to Serbia recently, but apparently they can afford more efficiency than Chicago. It can’t be the climate because Chicago is much colder in the winter. The real estate values must be really something in Belgrade compared to Chicago. Good thing in Chicago we have green roofs. Don’t seem to be many of those in Belgrade either. Priorities are important. The R-value of dirt apparently does not impress Serbs. Image courtesy of Beodom, Inc., Belgrade, Serbia 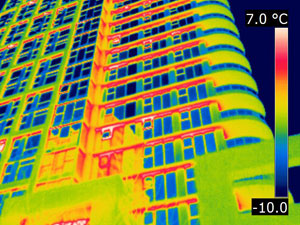 Photograph 4: Toronto At Night – Red is not good…

The best way to deal with relieving angles is to hang them off of the building with a “stand-off” (Figure 2) and then spread them out every second or third floor. This allows your insulation to run past the angle. Presto, continuous insulation (Figure 3). The stand-off’s can be welded to plates cast into slabs or welded to structural steel supports (Photograph 5). Amazing as it seems to civilians and other mere mortals, The Architect obsesses over the location of the relieving angle. It just can’t be anywhere. It has to look good wherever it is. Sometimes it has to line up over the heads of windows for reasons that escape me, a mere mortal, so we have to ask the structural engineer to be clever (Photograph 6). See, all you have to do is ask. 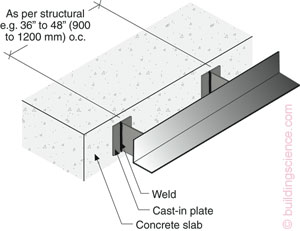 Figure 2: Relieving Angles - Hang them off of the building with a “stand-off”. This allows your insulation to run past the angle. 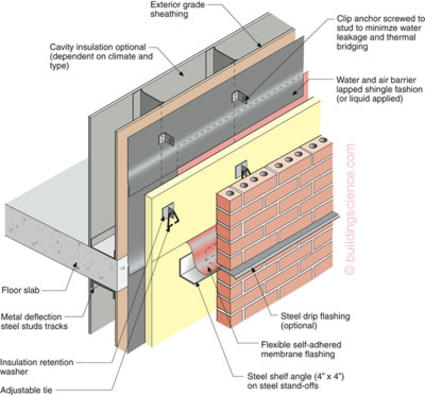 Figure 3: Continuous Insulation - Get used to this. If you are serious about energy this becomes standard practice. 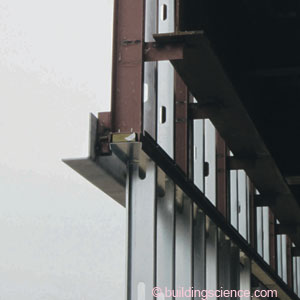 Photograph 5: Stand-Off - Can be welded to plates cast into slabs or welded to structural
steel supports. 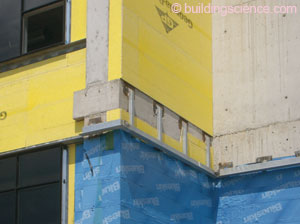 What if I do not like brick? Great, no relieving angles. How do I do panels? And how do I do panels “conservatively” if don’t buy into all that other stuff you have talked about. OK, OK, OK. Check out Figure 4. Although the structural design required for thin stainless angles and long galvanized L-rails is simple, engineers normally are designing for loads of thousands of pounds (kips) and the hundred pound loads involved here are unfamiliar and sometimes scary. 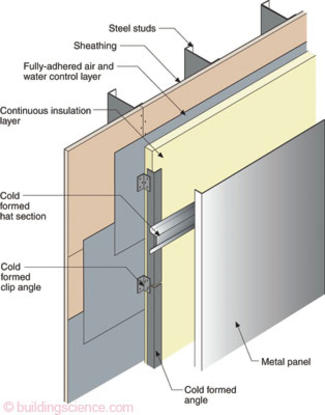 We also have to deal with the thermal bridges associated with windows. For reasons that are unclear to me, where windows are concerned we don’t call it a thermal bridge, we call it “flanking” losses. Flanking losses are losses around the window often through the buck or through the structure components the wall is installed in. Whatever. Bottom line is that you need to line up the thermal control layer in the window unit (a.k.a. “thermal break”) with the continuous insulation you are now required to install on the exterior of the wall. That often means pushing your window outboard and hanging it in mid-air, sort of. Gotta talk to the structural engineer again. Magic will happen again. Check out Photograph 7. Now you have to detail the water control and air control and thermal control layers (Figure 5). Or check out Figure 6 and Figure 7 – lots of possibilities. 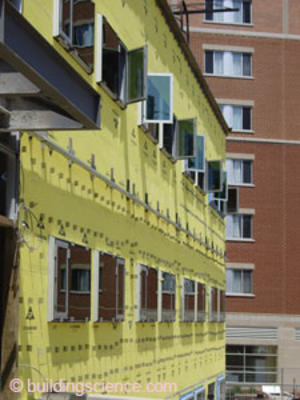 Photograph 7: A Little Bit of Everything - Relieving angles on stand-offs and bumped out windows. Nice. Wonder if there are any LEED points for this? Yeah, probably not. 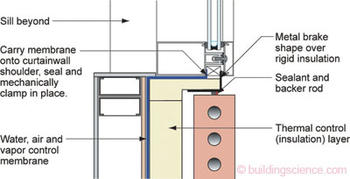 Figure 5: Plan View Alignment - Thermal control of the window frame and IGU lines up with the thermal control layer of the wall to control thermal flanking. 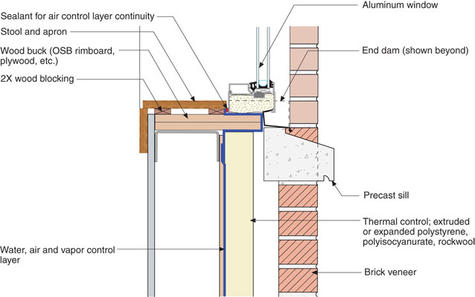 Figure 6: Vertical Alignment – Thermal control of the window frame and IGU lines up with the thermal control layer of the wall to control thermal flanking. 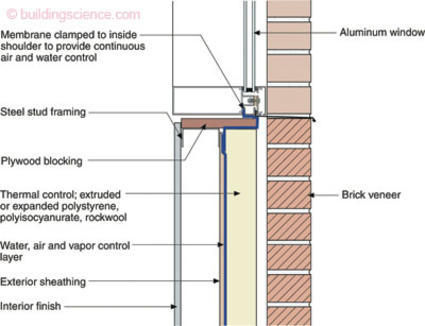 Figure 7: More Vertical Alignment – Thermal control of the window frame and IGU lines up with the thermal control layer of the wall to control thermal flanking.

Photograph 7 has everything. Relieving angles on stand-offs and bumped out windows. Nice. Wonder if there are any LEED points for this? Yeah, probably not.

The best thing to do is to take your structural engineer to lunch and discuss relieving angles, window attachment and balcony thermal breaks. Enjoy a nice moment with your engineer… 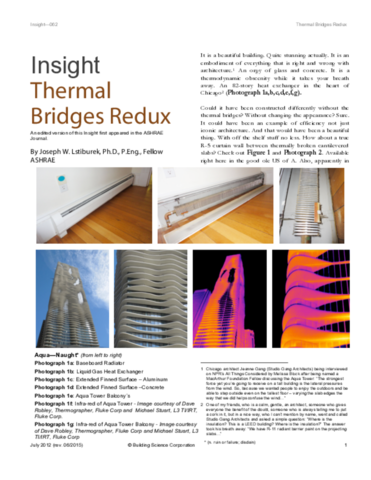