Canadians do live in igloos. Unlike the Inuit snow block version they’re typically taller than 10 stories and they are made out of foam. Insulated Concrete Forms (ICF’s) are beginning to come into their own in many locations, particularly Ontario (Photograph 1 and Photograph 2). Think of large Lego blocks made from polystyrene insulation filled with concrete (Photograph 3). 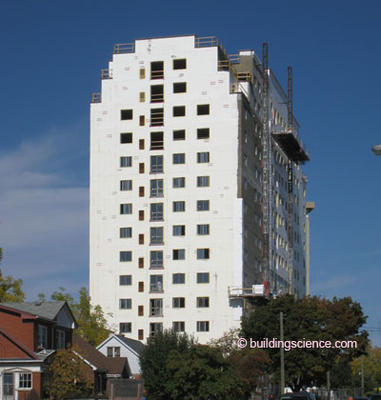 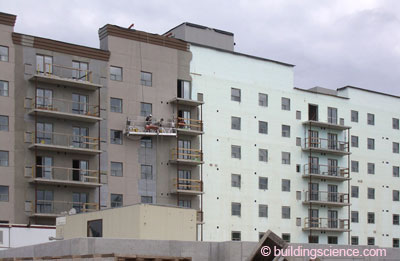 Photograph 2: Thermally Broken Balconies—Clip on balconies where exterior balcony corners are supported by columns supported by the balcony below. 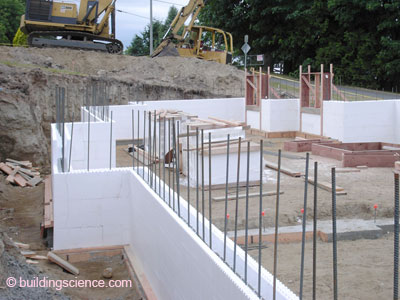 The foam is a stay-in-place form for cast-in-place concrete1 (Figure 1). The “effective” thermal resistances of these assemblies range from R-16 to R-25 depending on the specific product and the floor details. That is usually 2 to 4 times the effective thermal performance of most typical assemblies.2 No fluffy stuff shoved into steel stud thermal bridges. No exposed slab edges. Just continuous, glorious thermal insulation. It takes your breath away. 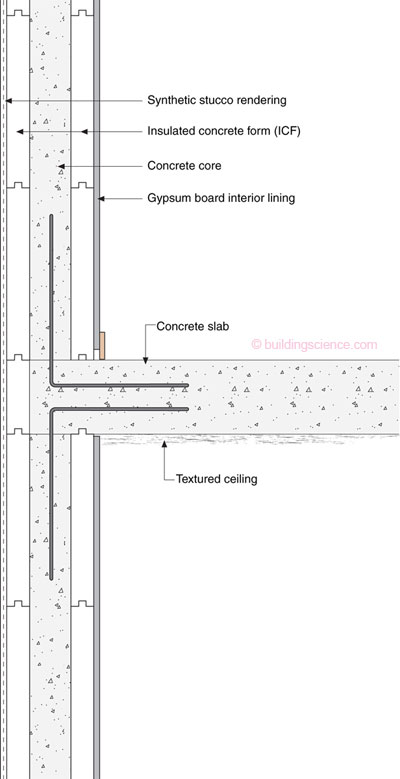 Figure 1: ICF Section—It’s a beautiful thing to see all of that continuous insulation. No thermal bridges. Makes me want to cry from happiness – in fact I can feel a little tear forming at the corner of my eye and running down my cheek as I write this… 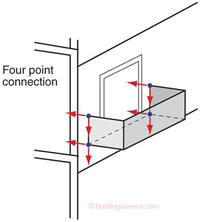 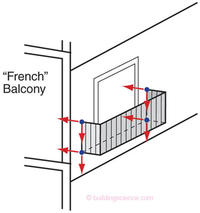 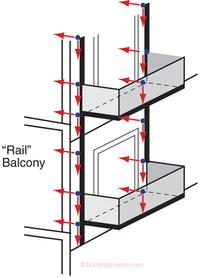 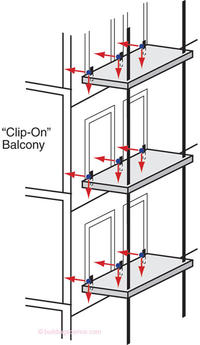 Figure 2: Structural Engineers Getting Serious—Give smart folks a problem that needs to be solved and get out of their way. All of these approaches allow for continuous insulation behind the balcony slabs. 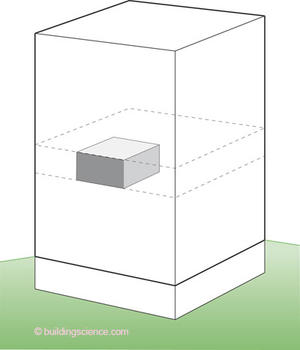 Figure 3: Unit Air tightness—Each unit is isolated from adjacent units and from the exterior by an air barrier system of minimum recommended resistance or air permeance of 2.00 L/(s.m2) @ 75 Pa. The inter-unit separation must also meet the specific fire-resistance rating requirement for the given separation.

Figure 4: Distributed Ventilation—Individual unit ventilation is provided across exterior walls not across interior pressure boundaries such as floors. Outside air is supplied to unit air handlers. A motorized damper is installed in line with an outside air duct connected to return side of air handler. A programmable thermostat or other controller controls the damper and air handler. Occupant controls the kitchen and bath fans intermittently. 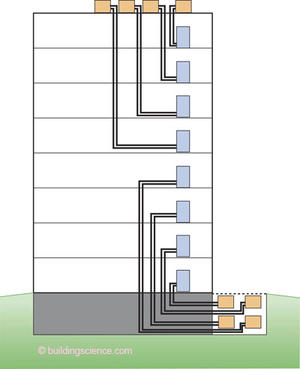 Figure 5: Distributed Conditioning—Individual unit exterior compressors are located on rooftops or in drywells (“pit” with screen). This allows individual billing. Guess what? Yup, it breeds individual responsibility. That’s why we Canadians are so responsible…

With ICF construction service raceways are routered into the interior layer of foam to run wiring. A gypsum board interior liner provides the interior finish. Exterior claddings are typically direct applied synthetic stuccos or manufactured stone veneers (Photograph 4 and Photograph 5). 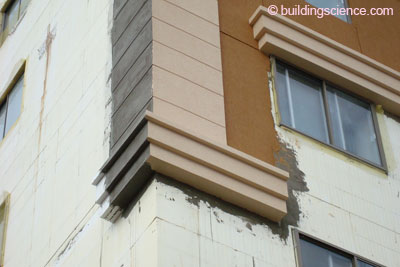 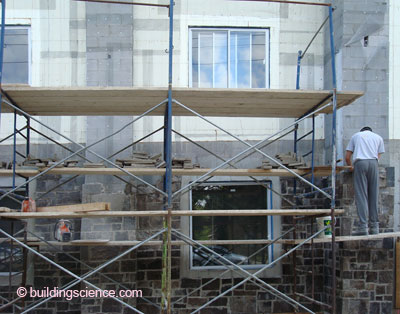 Like most systems, ICF’s are not perfect; they come with their own set of “issues.” One annoying one is that you can’t see the concrete. Huh? Think about it. You can’t inspect the concrete for voids the way we do with typical cast-in-place concrete because you don’t strip away the forms. Building Officials heads exploded trying to deal with the problem. It was fun to watch for a while. Then adults got involved and fixed things. At first ultrasonic’s were required at random points to check for voids. Turned out that the easy answer is to measure the volume of concrete placed. Because the foam blocks are accurately sized and spaced formwork, comparing the predicted volume of concrete needed to the concrete actually placed can catch large errors. There is already an infrastructure in place for projects of this scale counting trucks, how many cubic yards are sent to the job, how many are returned and if any is dumped on the ground. Some small voids (hand sized for example) are still possible but these have little to no structural effect.

Another annoying issue is the water management of “punched openings” such as windows. There are only two kinds of windows in the world–those that leak and those that will leak. So what to do? Easy, wrap the water control layer around the window opening creating an under window “gutter” (Figure 6). In most cases the water control layer is a synthetic stucco rendering. It can also be a “liquid applied flashing system” that is then integrated with the exterior layer on the ICF’s. With back ventilated and back drained exterior claddings attached to the ICF’s with furring strips no additional water management on the exterior face of the foam blocks is necessary, as mentioned earlier. However, this does not apply to the punch openings in such assemblies. The punched openings need to be lined with a liquid applied flashing system to get rainwater out to the exterior face of the foam ICF’s. Punched openings in all ICF assemblies regardless of cladding system need to be lined. 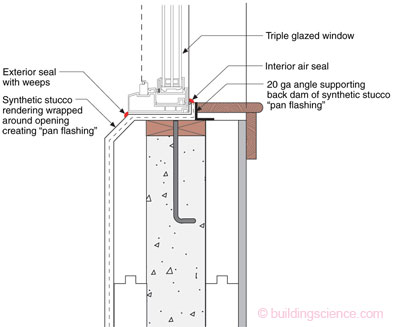 Figure 6: Punched Openings—There are only two kinds of windows in the world–those that leak and those that will leak. Openings need to be wrapped with an “under window gutter.” Note how the exterior rendering is wrapped under the window unit.

Now, for the ultimate annoying issue. Hypothetically speaking, say you are a frustrated building scientist and you are entertaining the thought of actually throwing a Molotov cocktail. How does an ICF or EIFS building fare when it comes to intentional burning? It appears that the gypsum board inside and a non-combustible cladding/coating outside should offer sufficient protection. And this is certainly the case if you believe all of the fire testing that has been done on the assemblies. And certainly the added air-tightness helps suppress fire spread (but makes flashover worse). At the end of the day what can I say? Adding all this foam on the outside of buildings sure makes some folks nervous, not me, but some folks who have grey hair, and you know what I think about grey hair.6

One of the things about ICF’s that is not annoying is the sound transmission quality of the assemblies. When excellent windows are used (I mean who uses bad windows these days?) with interior compartmentalization you can approach sound studio acoustics. Alas, that can be now annoying because installing noisy appliances and equipment in an essentially soundproof unit is, ahem, annoying.

It’s like a soundproof padded cell that allows one to rant and rave about the failings of LEED without disturbing the neighbors. And the compartmentalization and individual unit ventilation allows you to have a cigarette afterwards without compromising anyone’s air quality except your own. Was it good for you too? 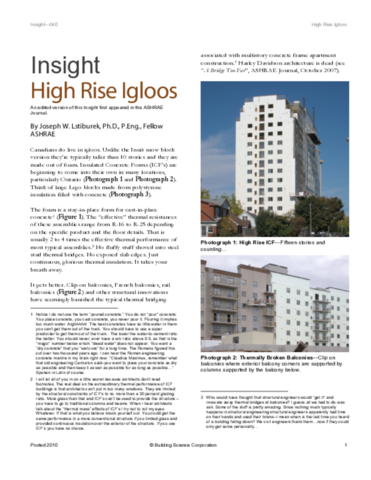