Adding outdoor air in hot humid climates causes moisture problems right? Sometimes. It depends on the condition of the house before you start to add outdoor air. Contrary to popular belief, most houses in hot, humid climates are over ventilated due to duct leakage and induced air change from internal air pressure effects due to unbalanced air flow and door closure.

Even if duct leakage and internal pressure effects are addressed, the latent loads introduced by ventilation air during part load periods are significant and must be addressed. This can only be done with supplemental dehumidification – or ASHRAE Standard 62.2 flow rates should be reduced.

For a common single family detached house (3 bedrooms;  2,000 ft2) this works out to 50 cfm of outdoor air. Restated, based on typical house volumes (ceiling heights at 8 ft), this is between 0.2 and 0.3 air changes per hour.

The uncontrolled component is dominated by pressure effects created by the operation of the HVAC system. Wind effects and stack effects acting on residential enclosures in hot humid climates are low enough to be almost neglected. This is reflected in ASHRAE Standard 136 (A Method of Determining Air Change in Detached Dwellings) and the tabulated values for W (the weather factor) and an appreciation of residential construction. Most residential enclosures in hot humid climates are low rise (below two storys – often one story – therefore only a small stack potential exists even if an appreciable temperature difference is present) and clad with stucco (a tight cladding system that is relatively wind insensitive).

Duty cycles (on time) often range between 30 and 70 percent.  Assuming a 33 percent duty cycle, the HVAC system induced air change is equal to a continuous ventilation rate of between 50 cfm and 100 cfm.

At the time of the work by Tooley, Moyer, Cummings, the typical house envelope leakage characteristics ranged between 2,000 and 3,000 cfm at 50 Pa. In other words, the building envelopes were fairly “leaky.” One obvious, but often overlooked, truth is that air change does not occur without an air pressure difference – even in a “leaky” building enclosure. In the humid south, since stack effects and average wind speeds acting on low rise residential enclosures are small, air change due to these effects is low, and almost independent of envelope leakage area.

During the past decade, residential building envelope leakage areas have decreased due to more effective draftstopping. This has resulted in an unintended consequence – air pressure differences within houses and between houses and the exterior have increased when HVAC systems are operating. Although the airtightness of the building envelope has increased, the expected air change reduction has not occurred due to the induced air pressure effects. Houses with leaky ductwork and unbalanced air flows continue to have high air change rates despite improvements in building envelope construction. 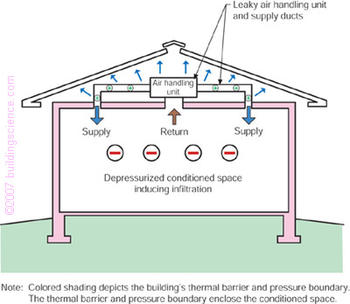 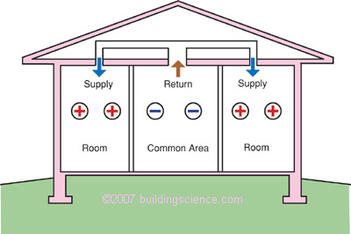 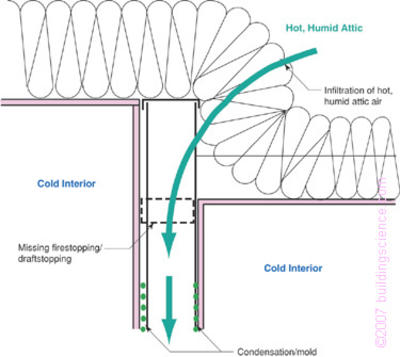 Ductwork and air handler leakage can be addressed using many techniques that will not be addressed here (except to say that standard duct tape is not one of them). Leakage values of approximately 5 percent (as tested by pressurization at 25 Pa) of total flow or less appear to result in negligible air change when HVAC systems are operating and return system flows are balanced (Lstiburek & Rudd). Numerous federal, state and utility construction programs have promoted duct system and air handler leakage performance specifications in the 5 percent range – a range of duct leakage that appears to be justified based on the field experience to date.

Pressurization effects due to door closure can cause significant air change and comfort problems. Bedroom pressurization relative to hallway/common areas of 10 to 20 Pa is common with single return systems (Tooley & Moyer). These effects can be mitigated using transfer grilles (Figure 4) or jump ducts (Figure 5). 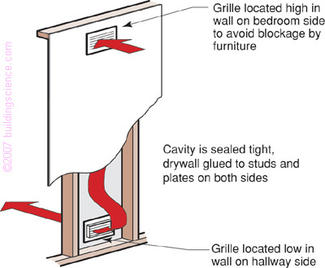 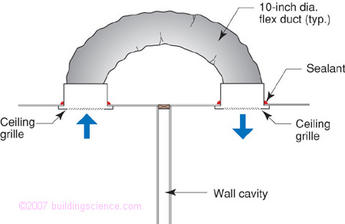 However, this is only true during the time of year when HVAC systems regularly operate. During the spring and fall months – during the “part load” seasons - HVAC systems do not regularly operate. Air change drops to between 0.1 and 0.2 ach. The typical house has a very low latent load due to air change during this time. This is fortunate since there is also almost no provision for moisture removal during this time by the HVAC system. Adding controlled ventilation to this condition does constitute a significant increase in the latent load. In fact, the load during this time is almost completely latent because the outdoor dry-bulb temperature is very near to the indoor dry-bulb temperature – and this latent load is effectively doubled in the typical house by adding a ventilation rate of 0.15 and 0.2 ach (the typical ASHRAE Standard 62.2 rate).

Gatley notes that the process of air conditioning consists of approximately 70 percent sensible cooling in the form of temperature reduction accompanied by approximately 30 percent latent cooling in the form of water vapor removal. According to Gatley, at partial load operating conditions which occur for a majority of system operating hours many dwellings in hot humid climates require higher ratios of latent cooling – 40 to 50 percent. This is not possible with standard residential air conditioning equipment.

The latent load problem under part load conditions during the spring and the fall in humid climates is progressively becoming more serious as the typical residential building envelope and its mechanical equipment evolve. The use of high performance window systems (spectrally selective windows – high visible light transmittance, low solar heat gain coefficient) is significantly increasing the time period of part load conditions during the year. This is coupled with equipment with higher SEER and EER ratings with no latent load control. And as a final insult to the house and its occupants, the equipment is typically oversized (on the order of 150 percent or more of total load). Adding controlled ventilation with untreated outdoor air to a house under these conditions almost assures problems – even with tight ductwork, sealed air handlers and balanced air flows.

Sizing of equipment will not be addressed here except to note that it is a major residential HVAC industry problem. Even with correctly sized standard HVAC systems, the part load problem associated with the latent load remains – albeit not to the same extent.

The author’s experience with newly constructed houses in hot humid climates has led him to conclude that supplemental dehumidification during part load periods is necessary – especially in houses with controlled ventilation. 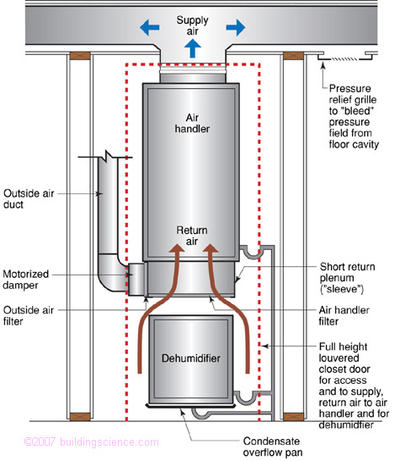 The use of a stand-alone dehumidifier plumbed/drained to a condensate drain has the advantage of low cost (adds approximately $300 to the typical house). The disadvantage is the heat generated by the dehumidifier and it’s effect on comfort. Additionally, operating costs are the highest of the three general approaches. However, it is a simple to implement solution and typically compensates for oversizing of equipment.

The use of enhanced air conditioning systems has the advantage of not having to install a separate piece of equipment. The disadvantage is a substantial increase in cost (adds approximately $1,000 or more to the typical house). Additionally, equipment sizing is critical. However, implementation is the easiest of the three systems and costs are likely to drop the most as these systems become “commodity items” as opposed to “special order.”

The use of ventilating dehumidifiers has the advantage of the lowest operating cost (since these dehumidifiers have been optimized for humidity removal). The chief disadvantage is their current cost (adds approximately $2,000 to the typical house).

In order to provide controlled ventilation in new houses constructed in hot humid climates without creating latent load problems it is necessary to take the following measures: 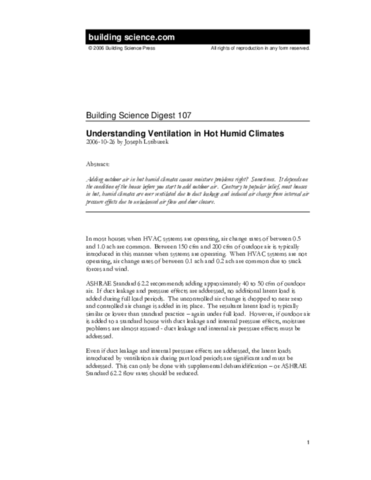