BSI-035: We Need To Do It Different This Time

Stop me if you heard this before. It was anything but easy when we tried this the last time.1 Not because it was hard, but because we didn’t know what we were doing.

It is amazing to me that most folks no longer remember the 1973 Oil Crisis. In October of that year Egypt and Syria attacked Israel on Yom Kippur. The Soviet Union got into the act by supplying replacement weapons and supplies to the Arabs. The United States responded by supplying replacement weapons and supplies to Israel. The Arab nations then responded with an embargo on oil exports to the United States. You youngsters can imagine what that did to the price of oil. What made things worse was that we were also in the middle of a stock market crash. It took a decade to recover, and then we were whacked again in 1979 when oil shot through the roof with the fall of the Shah and the Iranian Revolution. The only good news at the time2 was that by then Prudhoe Bay and the North Sea had come online so that the second shock was not as bad. Bad is a relative term here as interest rates were at 20 percent at the time and the construction industry tanked.

You would think that we would have all learned something from the experience. All that I can say is that it was an interesting time that proceeded to get even more interesting. A young physicist by the name of Amory Lovins wrote a seminal piece for the journal Foreign Affairs, in October, 1976 called “Energy Strategy: The Road Not Taken.” It sent policy shock waves through the establishment. Until then no one had considered energy conservation as a serious strategy.

It soon became a very serious strategy in Canada very quickly. We began to insulate every roof in the country and replace oil furnaces with gas furnaces like there was no tomorrow. The hangover from all this activity hit in the early 80’s. Rot and mold joined bad music as the signature symbols for that decade.3

What happened? How could anyone screw up energy conservation? It was supposed to be easy, a piece of cake, a lead pipe cinch. In retrospect, the obvious happened. When you change one thing it changes something else. And when you change that something else the law of unintended consequences rears its ugly head. We discovered that buildings, houses in particular, are interrelated systems.

In cold climates in the 1970’s most houses were constructed of poorly insulated attics. Some attics were vented, some were not. The houses were also leaky by today’s standards. And many of these houses were heated with oil furnaces connected to masonry chimneys.

The key to making all of this work – and it did work for a very long time – was the lack of moisture in the interior air (the air leaking into the attic from the house was “dry”), the heat transfer from the house to the attic was high (low levels of insulation made attics warmer than they are today and vented attics tend to work better when they are warmer), and not too much air flowed from the house into the attic because of the stack effect being mitigated by the presence of chimneys (neutral pressure planes were high due to the exhaust action of the “chimney fan”).

In the good old days when attics were poorly insulated and when it was cold outside the attic temperature was somewhere between the inside temperature and the outside temperature. Any moisture that migrated from the interior into the attic was able to be removed from the attic by the incoming exterior air entering through the soffit vents because this incoming air was warmed by the escaping heat from the house. This heat loss gave the attic ventilation air the ability to remove the moisture. Life was good. What came into the attic was flushed out by attic ventilation driven by heat loss.

Things were even better when you considered that the house under the attic was also leaky and therefore was subject to high air change. This meant that the interior air was also very dry. High air change in a leaky house that is heated in the winter makes for a very dry house. Most houses were so leaky and so dry that folks in those days actually bought humidifiers and added water. I mean how crazy was that?5  With relatively dry air migrating into an attic – and the attic being warm to boot – there was not much of a problem with moisture accumulation in the roof sheathing.

The final bit of good news for the old leaky poorly insulated attic was the presence of a chimney. And not just any chimney, a big, hulking masonry chimney connected to a big oil furnace. Lots and lots of air was sucked out of houses with these chimneys. Think of this old type of chimney as a powerful exhaust fan that served to depressurize the enclosure and provide air change. The air change diluted interior moisture levels and the depressurization raised the neutral pressure plane reducing the amount of exfiltration into the attic. Many old timers viewed these chimneys as the ultimate ventilation system – an exhaust fan that never burned out.

Now let’s remove the attic ventilation and see what happens? With low levels of insulation, a leaky house and a big chimney, it still all works. No moisture in the air in the house and lots of heat relatively speaking in the attic means no problem.

Let’s now disturb the system. Let’s now add a whole bunch of insulation. Nothing else, just add the insulation. The attic gets cold. Not much else changes. Airflow does not increase into the attic – or decrease.6 Insulation is not an air barrier (except the spray foam stuff, but I digress). But the attic becoming colder is enough to cause grief. The sheathing does not dry as quickly if it gets wet. We get moldy sheathing and even rot (Photograph 1). 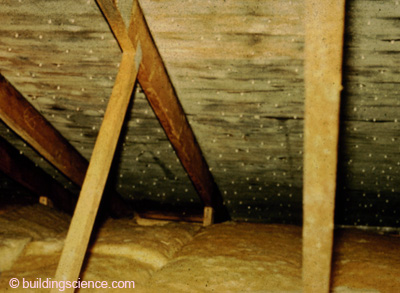 Photograph 1: Moldy and Decaying Attic – Notice the frost on the nails penetrating the roof sheathing. Moisture ends up on the coldest surfaces first. The sheathing is taking a beating, but the top chords of the roof trusses are doing fine because they are just a little bit warmer.

So what to do? Today, the answer is an easy one. Air seal the attic and vent the attic. Make sure that moisture laden air does not get into the attic from inside the house and make sure that if any moisture does get into the attic you remove it by ventilation. But the precedence is important – air sealing is more important than the ventilation. We didn’t know that in the Great White North at first. Well, not all of us. We just vented at first. This lead to some interesting outcomes.

But if we get a lot of air from the house and we also a get lot of heat as well, the attic actually gets warmer, the moisture problem goes away but the energy bill goes up.

Bottom line: you always want much more air entering the attic from the outside through the soffits than from the inside through a leaky ceiling. The strategy to make this work is pretty basic: make the ceiling as airtight as you can and add as much soffit venting as you can.

It took a while but by the end of the 70’s we got the attic part working. Air-tighten the ceiling plane, provide attic ventilation where the make-up attic ventilation air is provided by soffit vents and add lots of insulation. But we were not done by any stretch of the imagination. The problem was that the attic sits on top of something called a house. When we changed the leaky attic ceiling into a nice beautiful tight ceiling we reduced the air change in the house. Oops. 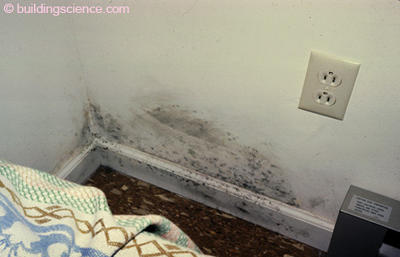 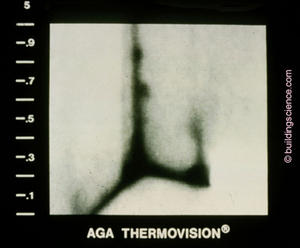 Photograph 3: Temperature Profile – IR scan of a corner illustrates cold surfaces. Mold growth tracks the cold surfaces. Compare this temperature profile to the mold growth pattern in Photograph 2. A cynic with a sense of humor – the best kind of cynic – would say that mold growth is a cheap and more accurate method of surface temperature profiling compared to an IR camera. How to fix this problem? Lower the moisture content of the interior air with dilution ventilation or warm up the surfaces or do both. 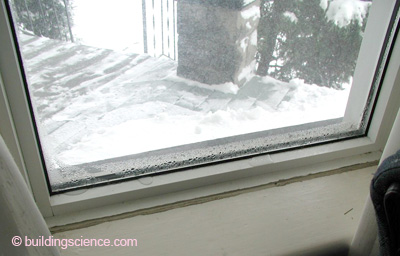 Photograph 4: Window Condensation - Interior moisture levels go up due to reduced air change and relative humidity adjacent cold window surfaces rises sufficiently to condense water. How to fix this problem? Lower the moisture content of the interior air with dilution ventilation or warm up the surface of the windows by replacing the windows with better windows or do both. 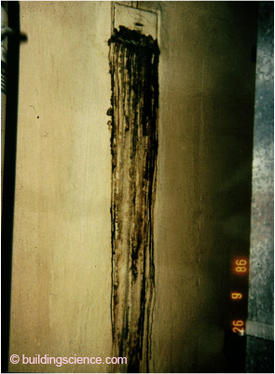 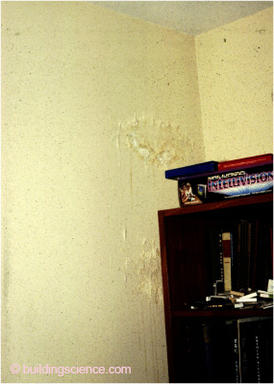 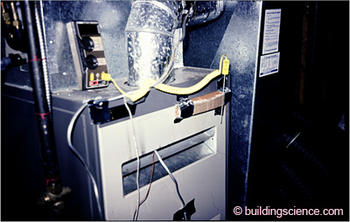 Photograph 7: Spillage of Flue Products – Notice the soot stains at the draft hood of this replacement gas furnace. How to fix this problem? Provide combustion air; see Photograph 9. What are all those tubes and toys you ask? I was once a young graduate student who thought you could measure pretty much anything. Boy was I wrong – and I will leave it at that.

We were running a giant nationwide uncontrolled experiment with people and their houses as the guinea pigs. Out of this came the two fundamental mottos of building science: no good deed shall go unpunished and the road to hell is paved with good intentions. Good thing that there were no lawyers in Canada, a looser pay system, no contingency fee litigation and sovereign immunity.8 Took the fun and profit out of misery.

So here we are 30 years later. Different country. Same physics. Amory Lovins will finally get to make his mark in the country of his birth. Energy conservation in existing homes is about to become serious business in the United States. We now know how to do it right. We spent the last 30 years learning and I am betting we won’t blow it.

How to stay out of trouble? It will be easy this time if we work from our experience. Here is what experience tells us to do – in order of priority:

Then air-tighten and insulate to your hearts (and budgets) content. Notice the order. We do the stay out of trouble part first. Then we caulk. Then we insulate. All this sets the stage for what will inevitably come later. There will be more energy conservation to follow, not less. If we get these first priorities out of the way, there is no way that we will screw up what comes later. The later order and the later technologies won’t matter. Think of the outcome. No houses rot this time. No one gets sick. We save energy. Life is good. 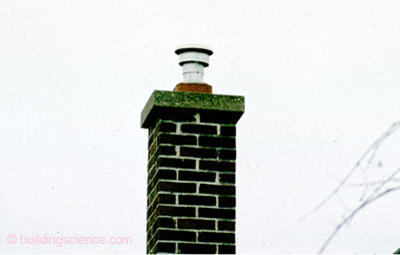 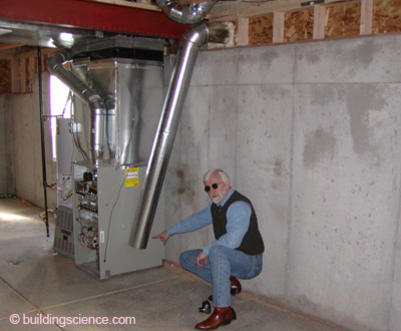 Photograph 9: Combustion Air Supply – Handsome guy with sunglasses (not me, but an ex-classical concert musician who knows stuff about buildings) is pointing at a ducted (to the outside) combustion air supply duct. As handsome as he is wouldn’t it be better to have sealed combustion power vented appliances and not have to worry about providing a duct like this? 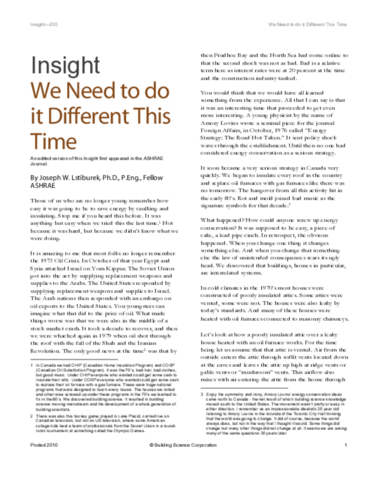