In traditional mass walls, e.g. a wall of solid masonry or earth, the resistance to rain penetration was only one aspect of enclosure performance (Photograph 1). Heat flow was also controlled by the thermal storage capacity of the massive walls, not just by virtue of the materials' thermal conductivity like the specialized insulation layers commonly used in modern building assemblies. The sun's heat was absorbed, stored, and slowly released to the interior and exterior, effectively damping typical daily fluctuations and thus increasing comfort. Vapor and airflow were also controlled by the mass of the wall. It is little wonder that such walls were used for thousands of years. Built of only brick and mortar, the wall carried all structural loads as well as performing as an acceptable enclosure. The small unit size of the brick allowed for planning flexibility so that such walls could be used for most purposes. Because mass brick walls allow a considerable amount of heat to pass through, the exterior surface temperature remained elevated throughout the winter and thus freeze-thaw durability and interstitial condensation problems were avoided. Compared to the poor control of airflow through windows and doors, the walls seemed airtight to the occupants. If the wall was sheltered by topography, other buildings, and roof overhangs, the amount of rainwater reaching the surface was so little that the wall could control this water before it reached the inner surface and caused damage. The biggest drawback to such wall systems was the large amounts of material and labor needed to construct them and the poor thermal control. 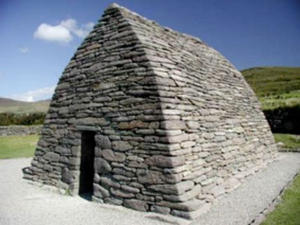 With the change from low-rise buildings with solid load-bearing walls to taller framed buildings, the dead weight and cost of traditional mass wall systems became prohibitive. Chicago's 16-storey Monadnock Building, constructed with 6-foot thick base walls between 1889 and 1891, pushed to the limit the load-bearing mass masonry wall (Photograph 2). Taller buildings with mass walls were practically impossible with the combination of high dead weight and low compressive strength. A large percentage of valuable ground floor area was lost to load-bearing walls and the resistance to seismic loads was poor. Today, poor control of rain penetration, heat, air, and vapor flow can be added to the list of drawbacks. 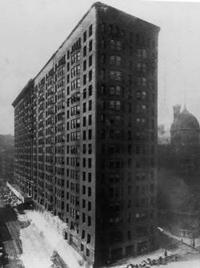 The industrial revolution and the scientific knowledge and technical confidence it provided resulted in attempts to produce perfect barrier wall systems. These systems very often fail to be perfect barriers because of defects in design, construction, or materials although they may still perform as required. While a unit of sealed glazing will not fail to resist rain (unless the glass cracks) the joint between the glazing and the window frame may. Similarly, metal panel systems developed in the post-war period rarely failed, but the joints and interfaces did. These examples reinforce the importance of considering the wall as a three-dimensional assemblage including joints. In many manufactured curtain walls, a small amount of rain penetration will cause no harm and either goes unnoticed or a drainage system is incorporated to deal with these small failures.

Corbusier is largely credited with popularizing the idea of separating the primary structural system from the enclosure system. Although the concept itself was well-developed by his time, the Domino house project made this approach desirable (Photograph 3). However, it is only in recent decades that the separation of the enclosure into layers and sub-systems for specific functions (support and control) has become more widely accepted and actually applied to building enclosures. 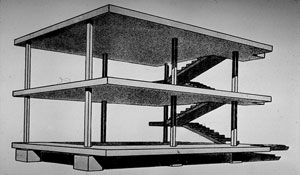 The current best practice in building enclosure design emphasizes the use of drainage as a rain control strategy, and demands a well-defined rain control layer, air control layer, and unbroken thermal control layer. Building science research and field experience over the last two decades have demonstrated how powerful the drained approach to rain control can be. However, other changes have also occurred over this time, specifically the use of air barriers, and steadily increasing insulation requirements. The increase in airtightness and thermal control (insulation, white roofs, radiant barriers) reduced the energy flow across the enclosure available to dry this remaining moisture. Hence, the potential duration of wetting for materials in high-performance enclosures is increasing, and this can cause durability problems.

Drainage does not remove all water that penetrates the cladding, as any rainwater absorbed by materials or clinging to surfaces can only be removed by evaporation. Similarly, air leakage condensation, which is now more likely in frequency, and severe in intensity because of higher levels of thermal insulation and higher cold-weather interior humidity levels (themselves the result of increased airtightness), cannot be dried as quickly as in the past. This lack of drying capacity, when combined with changing materials (masonry to gypsum sheathing, brick veneers to metal panels) and the substitution of traditional materials with often less durable modern ones, has increased the probability of moisture-related enclosure failures.

What is needed is a re-evaluation of how we assemble enclosures, and improvements in ensuring continuity of the control functions. As we change the insulation levels, airtightness, and materials, we need to consider changes in how materials are assembled in enclosures. The steel-stud framed walls of the 80’s and 90’s cannot continue to be built in the same manner in the 2010’s and 2020’s. It is now clear that such walls did not provide continuous thermal control. Better rain control is a critical part of the needed change, as are increases in tightness, better control of thermal bridging, and a protection of moisture-sensitive materials from extreme temperatures and prolonged wetting. The “perfect wall” approach (Figure 1) described above provides all of these improvements. Once thought of as an ideal enclosure assembly that would rarely be built, it is becoming the new standard for durable, energy-efficient, high-performance enclosures. 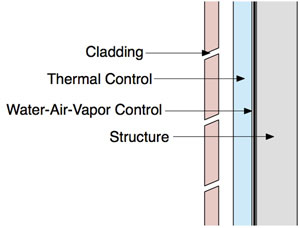 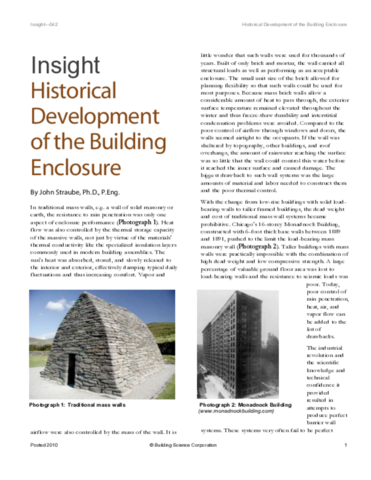