The figure below shows 2" XPS or foil-faced polyisocyanurate rigid insulation and 6" open cell low density spray foam insulation installed on the interior of the rimjoist and foundation wall, and 2" XPS rigid insulation installed under slab. As shown below, open-cell spray foam can be applied directly to the concrete, but if the foam is left exposed it will require a thermal barrier, typically a spray-on thermal barrier, or the basement can be finished with drywall.

The WUFI simulations for the foundation wall were conducted without the layer of board foam in Minneapolis, and it was found that there were no moisture related issues, in part because the concrete is not as susceptible to moisture. Installing board foam on the foundation wall will further increase the factor of safety over the predicted results and may be required in colder climates. The rim joist was not simulated in this study, since it was simulated previously, but because of the susceptibility of the wood to moisture related durability issues, and the vapor permeance of the foam, it is recommended to use the board foam at the rim joist to limit vapor diffusion and increase the temperature of the potential condensation surface. 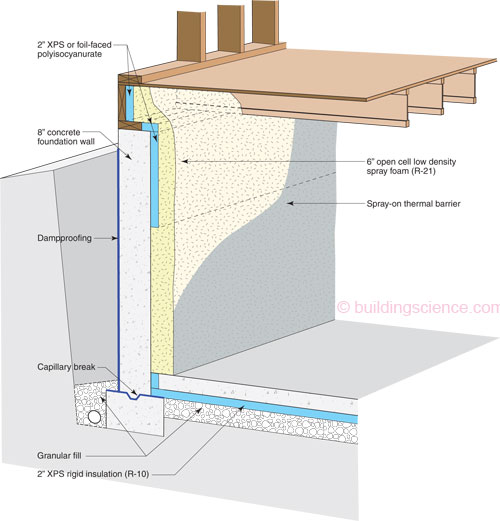 Open-cell spray foam provides very good continuous thermal control. Spray foam is an air barrier, so convective looping and air leakage thermal losses do not occur. This wall system has an R-value of R-21 and a predicted annual heating energy loss of 15.8 MBtus.

Open-cell spray foam is an air barrier, but is vapor permeable. The figure above shows the XPS insulation detail required at the above grade portion of the foundation wall for cold climate construction to minimize moisture condensation at the cold concrete in the winter months, and minimize inward driven vapor in the summer months.

The relative humidity was predicted in the center of the open-cell spray foam insulation and was found to be at safe levels (Figure 2). 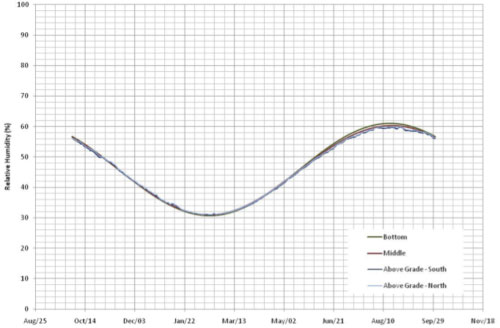 This proposed wall system does not allow for finishing of the basement without installing an interior framed wall. If the longterm goal is to finish the interior of the basement, High-R Foundation 10 should be considered instead.

Spray on thermal barriers can add significant cost to the spray foam installation, but are region specific.

This is a recommended wall construction provided that the details for cold climates are followed, including an extra layer of vapor condensation protection for the above ground portion of the wall.

Spray foams have been improved considerably for human health and the environment. Ozone depleting substances in the process have been removed, but some spray foams use greenhouse gases that are much worse than carbon dioxide. There are options available of more environmentally friendly spray foams do not release green house gases, such as water blown foams, on the market and should be considered.