What relative humidity should I have in my home? Seems like a simple enough question. However, the answer can sometimes be difficult to understand.

What relative humidity should I have in my home? Seems like a simple enough question. However, the answer can sometimes be difficult to understand.

The key is not to be too low and not to be too high. High enough to be comfortable, but low enough to avoid moisture problems associated with mold, corrosion, decay, and condensation.

How low can you go? Comfort wise at least, the 2001 ASHRAE Fundamentals (8.12) tells us that at dew point temperatures of less than 32 degrees F, complaints of dry nose, throat, eyes, and skin occur. A dew point of 32 degrees converts to a relative humidity of 25 percent at 68 degrees.

How high can you go? Again, using comfort as the criteria, the 2001 ASHRAE Fundamentals (8.12) tells us that a relative humidity of 60 percent should not be exceeded.

Now, it is important to consider the ASHRAE definition of comfort: “combinations of indoor space environment and personal factors that will produce thermal environmental conditions acceptable to 80 percent or more of the occupants within a space.” Remember that you can’t please all of the people all of the time.

The ranges cited above do not consider health, except indirectly. Some people love to live in desert climates, and some people love to live in the tropics. The upper limits from a health perspective are indirectly derived from a desire to control the growth of mold, bacteria, and other disease vectors. Similarly, for the lower limits, although the lower limits tend to be arguably “healthier” from a disease vector perspective. Dry conditions do not favor mold, most bacteria, and other disease vectors. However, some have argued that dry conditions dry out the mucus linings of the respiratory system and therefore make it more difficult for the body to fight off invaders. The other side of the argument is that there are fewer invaders to worry about.

As can be expected, individual sensitivities and susceptibilities vary greatly, and it is typically very difficult to generalize with respect to relative humidity and health. Having said it is difficult to generalize, we will do so anyway. Keeping relative humidity in the 25 percent to 60 percent range tends to minimize most health issues – although opinions vary greatly.

Incorrect recommendations in the popular press often lead occupants and homeowners to over humidify homes during the winter. The range of 40 percent to 60 percent relative humidity is commonly incorrectly recommended for health and comfort reasons. As we will see, there is a big difference between 25 percent as a lower limit rather than 40 percent – particularly in very cold and cold climates.

Comfort is of course different than health. When relative humidity drops below 25 percent there have been some reports in the medical literature of eye irritation in office workers using computers. Breathing difficulties have been reported in some individuals when relative humidities drop below 15 percent due to the mucus linings of the respiratory system desiccating. However, there is no medical consensus in this regard.

Many people believe that 25 percent relative humidity as a lower level is still too high. The debate breaks predictably into several camps with the engineers (the aircraft people being the most vocal) arguing for no lower limit for health and only a discussion on comfort. Whereas the lung researchers and some MD’s argue that until there is definitive research, why not keep the level high from a prudent avoidance perspective. This of course terrifies the microbiologists and mold researchers since higher lower limits clearly lead to mold growth in buildings and are associated with microbial contamination in typical residential humidifiers.

On the upper end, there is an emerging consensus. Interior relative humidity should be maintained so that a 70 percent relative humidity at a building surface is avoided in order to control mold growth and should never rise above 60 percent in any event.

In other words, for condensation to occur with air at 70 degrees and a relative humidity of 25 percent, surfaces need to be colder than 32 degrees. For mold to grow, surfaces need to be colder than 40 degrees. Of course, in a nice and happy coincidence, mold does not like to grow at surfaces below 40 degrees, but will happily grow at 54 degrees. What does this tell us? Well, if surfaces are likely to be cold – say like in the winter - you are better off having a lower relative humidity.

In a mixed climate, during the heating season, interior moisture levels should be limited to 45 percent relative humidity at 70 degrees. This limits the relative humidity adjacent to the interior surface of exterior walls to below 70 percent for the typical thermal resistance found in most building assemblies in this climate zone.

In cooling climates, interior mold growth also occurs because interior surfaces are typically cold and then exposed to moisture levels that are too high. The cold surfaces in cooling climates arise from the air conditioning of enclosures. When exterior hot air is cooled, its relative humidity increases. If the exterior hot air is also humid, cooling this air will typically raise its relative humidity above the point at which mold growth can occur (70 percent).

Where air conditioned "cold" air is supplied to a room, and this air can be "blown" against an interior surface due to poor diffuser design, diffuser location, or diffuser performance, creating cold spots on the interior gypsum board surfaces. Although this cold air is typically dehumidified before it is supplied to the conditioned space, it can create a mold problem on room surfaces as a result of high levels of airborne moisture within the room contacting the cooled surface. This typically leads to a rise in relative humidity near the surface and a corresponding mold problem.

If exterior humid air comes in contact with the interstitial cavity side of cooled interior gypsum board mold and other biological growth can occur. Cooling this exterior hot, humid air by air conditioning or contact with cool surfaces will raise its relative humidity above 70 percent. When nutrients are present mold and other growth occurs. This is exacerbated with the use of impermeable wall coverings such as vinyl wallpaper that can trap moisture between the interior finish and the gypsum board. When these interior finishes are coupled with cold spots (from poor diffuser placement and/or overcooling) and exterior moisture, mold and other growth can occur.

Accordingly, one of the most practical solutions in controlling mold and other biological growth in cooling climates is the prevention of hot, humid exterior air, or other forms of moisture transport, from contacting the interior cold (air conditioned) gypsum board surfaces (controlling the vapor pressure at the surface). This is most commonly facilitated by maintaining the conditioned space at a positive air pressure to the exterior and the installation of an exterior vapor diffusion retarder. Pressurization of building assemblies is expedited by airtight construction.

Experience has also shown that where conditions for mold growth are controlled, other biological growth such as dust mite infestations can also be controlled. Specifically, for dust mites to grow, 70 percent relative humidities are also necessary. Carpets located on cold surfaces, such as concrete slabs are particularly sensitive to dust mite growth. Carpets on cold surfaces should be avoided, or these surface temperatures should be elevated by the use of appropriate thermal insulation.

Many people are concerned about wood floors and wood furniture being damaged if humidifiers are not installed. More often than not, people tend to over humidify their homes in an attempt to protect their wood floors and wood furniture. They need not do so if relative humidities are maintained in the range of 25 to 60 percent between winter and summer. Figure 2: Moisture Content vs. Relative Humidity—The amount of bound water in wood is determined by the relative humidity (RH) of the surrounding atmosphere; the amount of bound water changes (albeit slowly) as the relative humidity changes. The moisture content of wood, when a balance is established at a given relative humidity, is its equilibrium moisture content (EMC). The solid line represents the curve for white spruce, a typical species with fiber saturation point (FSP) around 30% EMC. For species with a high extractive content, such as mahogany, FSP is around 24%, and for those with low extractive content, such as birch, FSP may be as high as 35%. Although a precise curve cannot be drawn for each species, most will fall within the color band. If we have a wood floor installed with 4 inch wide wood boards initially conditioned to the mid range of expected moisture content, i.e. 8 percent moisture content by weight, the range in movement is plus and minus 0.04 inches or approximately the thickness of a credit card. This is not an aesthetically displeasing or unacceptable range of movement. Of course if the wood is not initially conditioned to the mid range of the expected moisture content, then the movement can be two credit card thicknesses. 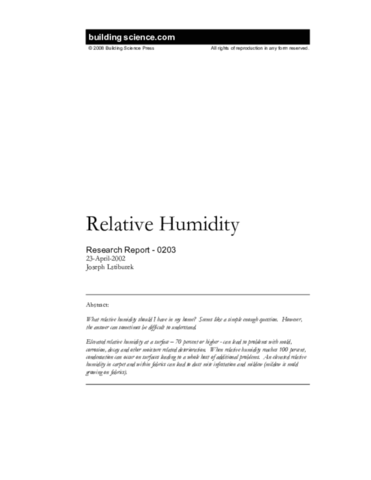