The issue becomes even more complex when you realize that you can replace the word humidity in the previous sentences with the words "indoor air quality " and not change the meaning or impact. Dilution is often used as the solution to indoor pollution in heating climates. Unfortunately, in humid, air conditioning climates, the greater the rate of dilution, ventilation or air change, the greater the rate of moisture entry with the exterior air. Therefore, the greater the likelihood of mold and other biological growth problems, particularly if the moisture in this incoming air is not removed.

Humidity concerns in the southern humid climates are particularly difficult to resolve. This is because one of the most effective approaches to dealing with humidity in heating climates, ventilation, can cause major humidity problems in the humid south. The issue becomes even more complex when you realize that you can replace the word humidity in the previous sentences with the words "indoor air quality " and not change the meaning or impact. Dilution is often used as the solution to indoor pollution in heating climates. Unfortunately, in humid, air conditioning climates, the greater the rate of dilution, ventilation or air change, the greater the rate of moisture entry with the exterior air. Therefore, the greater the likelihood of mold and other biological growth problems, particularly if the moisture in this incoming air is not removed.

Not following this approach has even greater implications with respect to health, safety, comfort, durability, maintenance and affordability.

When problems from mold and biological growth do occur in the humid south, they can be divided into three
distinct categories:

Although these problems can occur independently of each other they often occur in combination. For example, elevated levels of interior moisture are usually due to moisture passing through building cavities from the exterior resulting in both cavity moisture problems as well as problems on interior surfaces once the moisture has gotten into the conditioned space. Overcooling of the space just magnifies both problems thereby creating a third.

Interior Surface Related Problems Due to Elevated Levels of Moisture

Concerns about energy conservation has lead to the development of energy efficient mechanical cooling systems. Unfortunately, this has also reduced the ability of many of these systems to dehumidify air. In many cases, the exterior air is not cooled sufficiently to remove sufficient quantities of moisture.

Air cooled to 55 degrees Fahrenheit is usually too cold to introduce into a space. In the past this cooled air was heated after it was cooled ("reheat") prior to use. Reheat results in a significant energy penalty, and is not allowed in many jurisdictions for this reason. To avoid reheat requirements, some systems do not cool air down to "dew point 55". Unfortunately, this can result in insufficient moisture removal and subsequent high interior moisture levels.

Two approaches have been successfully used to address the issue of reheat. One is a new technology: heat pipe heat recovery. The other dates back to the 1930's and has been recently "rediscovered": run-around coils. Both of these approaches use heat removed during the mechanical cooling process to "reheat" the cooled air once it has shed its moisture thereby reducing the energy penalty of standard reheat.

Interior Surface Related Problems Due to Overcooling of Surfaces

When surfaces become too cold, surface relative humidities rise above 70 percent. When they rise to 100 percent, condensation occurs. If air conditioned air is supplied at too low a temperature, the diffusers can be extremely cold leading to condensation ("sweating"). Where diffusers are located poorly or adjusted incorrectly, cold air may be "blown" against surfaces creating cold spots and localized areas of high relative humidity and mold growth.

Supply ducts enclosed in interior walls and dropped ceilings often are not sealed and leak supply air. This supply air is typically under substantial positive air pressure and the resulting "jet" of air can "blow" against a surface leading to localized cooling. The cooling happens from the building cavity side, whereas the mold growth usually appears on the room side.

Figure 2 illustrates the case of a wall experiencing condensation as a result of diffusion in a particularly severe cooling climate (Miami, Florida). By using impermeable rigid insulation (approximately R-7) on the interior of the masonry wall, the temperature of the first condensing surface is raised. As shown in the graph in Figure 2, condensation potential is eliminated since the temperature on the exterior face of the rigid insulation (the first condensing surface) is above the ambient range throughout the year.

Figure 2: Potential for condensation in a masonry wall cavity in Miami, Florida—Placing rigid insulation on the interior of the masony wall raises the temperature of the first condensing surface above the mean daily ambient dew point temperature so that no condensation will occur. The outside surface of the rigid insulation becomes the first condensing surface in this assembly.

Overcooling of spaces often occurs as a result of ignorance and/or poor design. Most people in the humid south are aware of the fact that the more an air conditioner operates the greater the removal of moisture from the interior air by the air conditioner. System controls are therefore often adjusted to provide frequent operation of the system. To keep systems operating more frequently, thermostat settings are lowered below recommended levels. In addition, when systems are oversized, in order to operate for longer periods of time, thermostat settings have to be lowered resulting in overcooled spaces.

In a final, unfortunate irony, overcooling a space can actually increase latent loads rather than result in a net moisture removal. Moisture flow is generally from warm to cold. The colder the space the more moisture is drawn into the space from the exterior.

Controlling these mechanisms means keeping the rain out of the building envelope, keeping exterior air out of the building envelope and keeping exterior moisture from vapor diffusion out of the building envelope. In addition it also means being realistic about the probability of success at controlling these mechanisms and therefore providing a means of drying to the interior. In practice, this usually means not preventing the normal/typical drying to the interior conditioned space by installing an impermeable wall covering. Rain is a particularly severe mechanism of moisture transport in the humid south. When rain wets the exterior of a building the exterior surfaces typically absorb the rain water. For instance, brick cladding is a powerful rain water "sponge". Recall that moisture flow is from warm to cold. When wet brick is warmed by the sun, a significant temperature differential is created. The sun serves to "drive" rain water into a building envelope. If the interior space is also air conditioned or cooled, the air conditioning serves to "suck" the rain water inwards as a result of a temperature differential.

The effect of incident solar radiation on a rain saturated cladding is dramatic. Consider that a brick veneer or stucco coating can be readily warmed by the sun well above 120 degrees Fahrenheit. The air contained in an airspace behind a brick veneer can be similarly warmed and can be considered to be at saturated conditions (vapor pressure of 11.74 kPa). This results in an increase of almost 500 percent in the effective exterior vapor pressure (Figure 3). Solar radiation is a powerful force that drives moisture in rain-saturated cladding inwards. This force can be ten times greater than the vapor diffusion driving moisture outwards under the most hostile conditions experienced in heating climates.

Exterior sprinklers can excacerbate problems by wetting exterior claddings on a regular basis. The normal southern climate temperature differential then serves to move this sprinkler deposited water into the conditioned space. . . 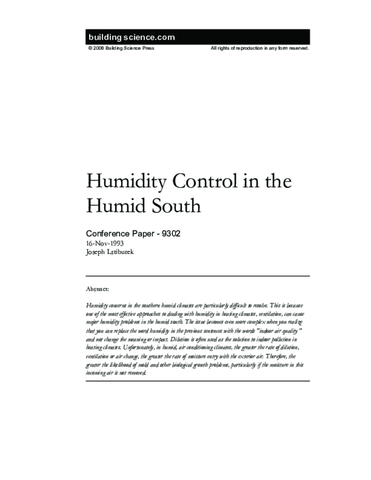