The research reported in this paper is aimed at increasing the understanding of the hygrothermal performance of interior basement insulation systems by a combination of field monitoring of four assemblies and one-dimensional computer modeling. The work described here is part of a Canada Mortgage and Housing Corporation (CMHC) sponsored research program to determine the significance or insignificance of potential moisture problems due to an impermeable polyethylene layer in above- and below-grade walls (Wilkinson et al. 2007).

Due to a combination of demand to lower energy use, stricter building energy codes, and the desire for maximizing finished space in a house, an increasing number of basements are being finished and insulated (often on the interior). However, this practice has resulted in more moisture-related failures of their wall insulation systems (Lstiburek 2006), including condensation and/or moisture accumulation within the vulnerable portions of the assembly.

The research reported in this paper is aimed at increasing the understanding of the hygrothermal performance of interior basement insulation systems by a combination of field monitoring of four assemblies and one-dimensional computer modeling. The work described here is part of a Canada Mortgage and Housing Corporation (CMHC) sponsored research program to determine the significance or insignificance of potential moisture problems due to an impermeable polyethylene layer in above- and below-grade walls (Wilkinson et al. 2007).

Heat and moisture flows in the basement environment have been addressed by many researchers, including Timusk & Pressnail (1997), Cheple and Huelman (2001), and Ueno and Townsend (2006). Some important points that inform this research include the following:

A selection of field surveys, simulation, and experimental work focused on interior insulation of basements is presented here:

Robert W. Anderson and Associates (1989) performed a field survey of 42 houses in Minnesota, measuring moisture content of wood framing of interior insulated basement walls. They included walls both with and without a polyethylene vapor retarder; the installation of the polyethylene was classified as “excellent,” “good,” or “poor” (i.e., from “air sealed” to having “many tears and rips”). Measurements were taken in both spring and summer; higher moisture contents were seen in the summer, both above and below grade. Some condensation was noted on the exterior side of the polyethylene during the summer at the above-grade portion. There was no correlation between the quality and/or presence of a vapor retarder and framing moisture content; walls without polyethylene did not show excessive moisture content levels. In addition, the authors noted that the polyethylene inhibited the drying of incidental wetting (such as leakage due to improper drainage), and suggested that it might be better to omit this layer.

Swinton and Karagiozis (1995) examined the phenomenon of condensation on the exterior side of the polyethylene vapor barrier during spring and summertime, at the above-grade portion of the wall. This problem is caused by inward vapor drives from the damp concrete; when there is an inward thermal gradient, the moisture moves inwards and condenses on the polyethylene. They replicated this problem using two-dimensional hygrothermal modeling in a Montreal climate and demonstrated that using semi-permeable materials (building paper) on both sides of a fiberglass batt cavity had the best overall performance. Although removing the interior polyethylene layer eliminated the summertime problem, it resulted in moisture accumulation at the concrete-insulation interface during the winter.

Goldberg has tested a variety of interior basement insulation configurations at a Minnesota test facility. After testing frame walls with fiberglass insulation (Goldberg and Huelman 2001), she recommended an assembly with polyethylene on both sides of the stud bay, as adopted by the Minnesota building code. However, a 2002 addendum provided warnings against using this assembly in “superficially dry” basements, which would accumulate moisture behind the exterior polyethylene. Tests were also run using a variable permeability vapor control layer made of polyamide-6 (PA-6) (Goldberg and Gatland 2006). The PA-6 wall experienced minimal condensation during the summertime, and was able to dry inwards, unlike similar polyethylene walls. The PA-6 had similar monitored performance to Kraft-faced batts. In addition, some walls were constructed with a latex elastomeric waterproofing on the concrete surface. These walls had noticeably higher wintertime condensation than the uncoated concrete walls (which largely showed only surface dampness), due to the elimination of the storage capacity of the hygroscopic material, by the hydrophobic dampproofing layer.

Zuluaga et al. (2004) examined seven interior basement wall insulation assemblies in a test installation in the Chicago area; they included two rigid insulation systems (foil-faced polyisocyanurate and expanded polystyrene), two fiberglass blanket systems (perforated and unperforated), and three types of framed walls with fiberglass insulation (encapsulated batts, unfaced batts, and Kraft-faced batts). They were run for two years; the summer conditions were changed between low relative humidity, and high RH between years. The moisture levels behind the rigid insulation systems were dominated by their vapor permeability; the impermeable foil-faced polyisocyanurate showed high sustained moisture levels. The roll blanket walls, at their above-grade portion, had moisture levels matching their permeability: the unperforated blanket accumulated moisture during the summer. The framed walls showed responses that did not correspond to their permeability; in contrast, they were dominated by airflow, bypassing the remainder of the assembly. This was demonstrated by noting that the absolute moisture content levels in the assembly closely tracked interior levels. In this experiment, this airflow caused drying of the assembly.

Ueno and Townsend (2006) examined eight interior insulation assemblies in a Chicago-area basement. These assemblies included rigid foam (foil-faced polyisocyanurate and extruded polystyrene/XPS), fiberglass batt frame and polyethylene walls (polyethylene on one or both sides), composite walls (XPS with a stud frame to the interior; two versions), a perforated roll blanket, and rigid fiberglass board with a PA-6 facer. The assemblies were periodically wetted to measure their drying response. In non-wetted operation, some of the walls showed signs of air leakage from the interior behind the assemblies, as indicated by identical dewpoints to inside (e.g., foil-faced polyisocyanurate). The perforated blanket also showed similar dewpoints to interior, but this could be due to the permeability of the facer (13 perms or 720 ng/Pa•m•s2). The composite walls showed that the wood framing was completely protected from concrete-sourced moisture by the XPS insulation. In the wetting experiments, some walls very quickly (polyisocyanurate, due to air leakage, and perforated blanket). Others dried in a controlled manner, allowing drying through the vulnerable portions of the assembly without damage (composite walls). The XPS (2”/50 mm) wall, however,
showed extended periods of high humidity after the wetting event, showing that drying occurred more slowly through the 0.5 perm or 29 ng/Pa•m•s2 material; the PA-6 wall had a similar response. The double polyethylene showed minimal wetting, which was a surprise given its low drying potential. However, it is likely that during wetting, drainage out of the wall cavity occurred (due to the hydrophobic materials lining both sides), so a low initial dose of water was retained.

This review of the literature indicates that a consistent failure seen in a wall with a single layer of polyethylene on the interior is condensation due to spring or summertime inward vapor drives. Wintertime condensation on the above-grade portion was occasionally seen; this was worsened by removing the hygric buffer capacity of the concrete. Monitored data showed that interior insulation has drying potential to the interior in most cases, especially in the below-grade portions of the wall.

Four interior basement wall insulation assemblies were monitored in a field installation; following the first year of operation, some of the walls were disassembled and inspected.

The tested assemblies are described in . . . 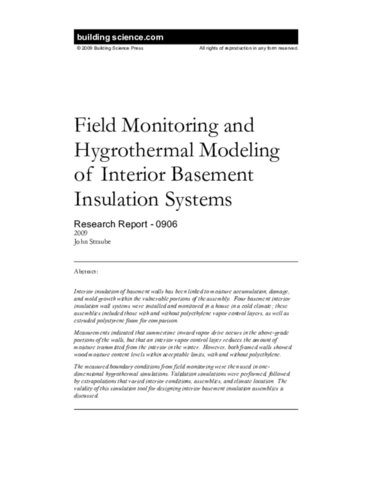