High performance space conditioning and control systems that match the high performance of Building America enclosures are necessary to meet performance targets of DOE residential research program. Conditioning systems with integrated mechanical ventilation and year-around temperature and humidity control are necessary. The most significant climate-specific need is for system-integrated dehumidification for humidity control without overcooling the space. Cost-effective dehumidification without overcooling will enable continued and further reduction of sensible loads (including high-performance glazing) that would otherwise exacerbate humidity control problems in humid climates.

The overall goal of the DOE residential research program is to reduce average whole house energy use in new residential buildings by 30-90 percent by 2020, including homes that achieve zero net energy use on an annual basis. High performance space conditioning and control systems that match the high performance of Building America enclosures are necessary to meet performance targets. Conditioning systems with integrated mechanical ventilation and year-around temperature and humidity control are necessary. The most significant climate-specific need is for system-integrated dehumidification for humidity control without overcooling the space. Cost-effective dehumidification without overcooling will enable continued and further reduction of sensible loads (including highperformance glazing) that would otherwise exacerbate humidity control problems in humid climates.

Standard residential cooling equipment responds primarily to a sensible load as registered by a thermostat to activate a forced air cooling system by transferring interior heat to a direct expansion refrigerant evaporator and rejecting that heat to outdoors via an air cooled refrigerant condensing unit. Some more recent thermostats employ a relative humidity sensor that allows the thermostat to respond to a relative humidity set point as well as a temperature set point. Pertaining to cooling, a switch at the thermostat generally opens on humidity rise, which signal generally results in at least one of: a) the control of lower air flow across the evaporator; and, b) a three degree set point depression. Lower air flow across the evaporator increases the latent cooling capacity by lowering the evaporator temperature and increasing the contact time of air on the coil surfaces. The set point depression forces the system to operate more. While these cooling system enhancements improve indoor humidity control, they do not achieve the ultimate goal of year-around humidity control without over-cooling.

The most significant system concept included adding a condensing/reheat coil in the process air stream. The control strategy would be such that when a temperature set point was satisfied, but a humidity set point was not yet satisfied, a dedicated dehumidification mode would be activated.

The original concept was such that, when dehumidification mode was activated, while the compressor operated, automatic valves would divert refrigerant away from the outdoor condensing coil to the indoor condensing coil, delivering dry air at room temperature or warmer, until the humidity set point was achieved or until the space temperature rose sufficiently to initiate a reversal to normal cooling mode. This system is generally shown in the schematic of Figure 1. The system concept also incorporated:

a) an electronically commutated motor (ECM) blower for efficient and variable air moving capacity; and

b) a thermal expansion valve (TXV) for efficient and adaptive refrigerant metering.

A design kickoff meeting was held with a refrigeration consultant and a manufacturing partner. The outcome of the meeting identified more specific design elements, components, and criteria that would frame the prototyping project. The resultant schematic with some notes is shown in Figure 2.

Figure 2: Initial design schematic with notes from the kickoff meeting

As shown in Figure 2, there were multiple possible paths identified that needed to be refined down to one choice for constructing the prototype. The overriding factor in making design decisions was in favor of keeping cost down. It was thought that the equivalent competitor to beat was a separate dehumidifier integrated with the central air handling system, costing in the range of $1,500 to $2,000 installed. Because of the cost factor, it was highly desirable to not have to make any modifications to a standard, off-the-shelf outdoor compressor/condenser unit. It was therefore decided that, rather than cut into the outdoor unit piping to install valves for diverting refrigerant around the outdoor condenser, hot gas from the compressor discharge would be forced through the outdoor condenser with the condenser fan motor shut off to significantly reduce refrigerant cooling and condensing in the outdoor unit. It was thought that, if the compressor did not suffer with too high a pressure drop by forcing gas through the inactive outdoor condenser, then a major cost would be eliminated, and due to some heat loss in the outdoor condenser the final process supply air temperature could be beneficially lowered while remaining above room temperature.

Another choice that needed to be made was whether or not to use an accumulator to protect the compressor from liquid due to large swings in refrigerant flow, and due to dehumidification operation during outdoor temperatures lower than normal cooling conditions. Some thought that the accumulator was unneeded because of the established design criteria of: a) a TXV which, in theory, should assure superheated vapor going to the compressor; and, b) a scroll compressor which is more tolerant of some liquid. However, it was decided that if refrigerant conditions temporarily got outside of the TXV throttling range, the risk of compromising the compressor might be too great. Normal cooling-only outdoor units do not come with accumulators, and it would be too costly to cut into the piping to install one. Thus, it was decided to select a heat pump outdoor unit which came with an accumulator and low pressure switch to aid in compressor protection and low ambient operation.

As the design phase continued with refinements, it was thought to be desirable to be able to operate the system in three modes: a) normal cooling; b) dehumidification only; and, c) heat pump heating. Since the refrigerant flow direction changes between cooling and heating mode, causing the cooling mode evaporator to become a heating mode condenser, a design was developed that required a 4-way reversing valve to feed and leave the receiver in the proper direction regardless of the system mode of operation. This is shown in the schematics of Figures 3 through 5, which illustrate the as-built prototype configuration.

Condenser coil manufacturers were consulted to establish the indoor condenser coil design. Based on the manufactures design models, many parameters were parametrically changed to arrive at the desired condensing/reheat capacity within the desired coil cross sectional area and with the least air pressure and refrigerant pressure drop. . . 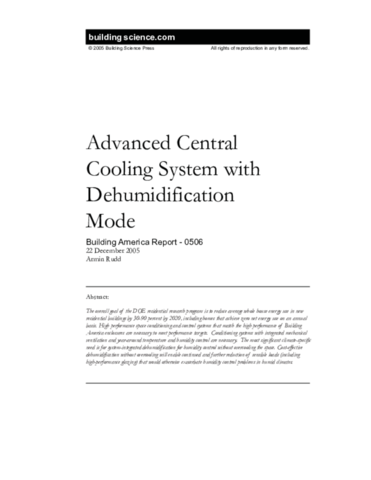