The following report is an excerpt from the 2010 Building Science Corporation Industry Team Building America Annual Report. The main focus for this research project is on the AAON heat pump system with digital scroll compressor and modulating hot-gas condenser reheat installed in the GreenCraft Builders prototype house in Lewisville, TX.

Highlights for the last quarterly report/year-end report to NETL

The research plan for this project was finalized by February 2010. BSC then continued with its main focus on the AAON heat pumpt syste with digital scroll compressor and modulating hot-gas condesner reheat installed in the GreenCraft Builders prototype house in Lewisville, TX.

After the initial heat pump installation in December 2009, BSC identified that the refrigerant receiver was not installed with the proper vertical dip-tube orinetation specified in the installation manual. That was later corrected.

Issues related to use of elelctric resistance backup heat during defrost operation and during recovery from programmed thermostat setback were addressed. Control system improvements for more efficiently handling backup heat were implemented in coordination with the project team. A small improvement involved extending the time between defrost cycle to 90 minutes from 30 minutes. A much bigger improvement involved changing the thermostat from one with 2 stages of heat pump heat control to one with 3 stages of heat pump heat control. That was necessary in order to avoid excessive use of backup electric strip heat use during recovery from daily programmed thermostat setback. The original Robertshaw, 2-stage heating thermostat worked such that if the measured space temperature was more than 2°F from the setpoint temperature, 2nd stage heating (i.e. electric strip heat) was energized until the setpoint was met, or in other words, electric strip heat was being used for entire recovery period from the 4°F programmed thermostat setback. An intersting feature of this low-energy prototype house was the decorative, exposed, stained and polished concrete floor throughout the house. However, an unintended consequence was that, because the exposed thermal mass took a long time to heat up, and once heated it took a long time to cool down, the house was mostly being heated with electric strip heat. An additional complication was that the Honeyweel 3-stage heating thermostat had the reverse logic needed by the AAON equipment for energizing a dehumidification call (requires loss of 24 Vac to activate condenser reheat), which is why the Robertshaw thermostat was used in the first place. That was corrected by adding another relay to reverse the reverse logic.

In March, a new outdoor digital scroll compressor unit was installed to correct uncertainties about the previous systems compressor performance due to shipping damage. An airflow restriction in the air handler was removed, dropping the high speed fan power by about 30%.

Installation of monitoring equipment occurred over two trips to the site, spanning March to June. Data is being downloaded via communications over the internet. The field monitoring data BSC is collecting at the Lewisville site is complimenting AAON lab test data, ans is expected to continue through June 2001. The field test data is being shared with the manufacturer to aid in the product evaluation and improvement BSC continued to work with manufacturing partner AAON to obtain more rated performance data for the NIST lab house project which is slated to use the AAON heat pump equipment with dedicated dehumidification mode. In the future, it is expected that NREL will be conducting additional lab tests.

Figure 1 shows the electrical energy consumption, separately monitored for the indoor and outdoor units on a 1 minute interval, for the month of July 2010. This short interval data allows us to accurately track energy consumption in all modes of operation, including 1st and 2nd stage cooling and heating, and dehumidification mode. Note that the peak electric demand is 3500 W, which is less than the 5000 W peak output of the solar electric energy system on the roof of this low energy home. In some months, the solar PV system generated more energy than the occupied and conditioned home consumed. Although the air handler unit uses an efficient electronically commutated motor (ECM), the data of Figure 3 revealed that improvement can be made with fan energy. The pressure drop across the blower is low (~80 Pa, 0.32" wc) during dehumidification, but it is relatively high in 1st and 2nd stage cooling operation (140 Pa and 215 Pa, respectively). Airflow resistance could be further optimized to reduce fan energy consumption. Refrigeration leak issues at two pressure monitoring transducers were resolved at the Green Dream I prototype house in New Orleans where an AAON dehumidifying heat pump system has been operational since July 2009. Data collection by NREL continues on that system, and BSC is working with NREL to obtain an improved performance map for that system for better computer modeling.

Distributed, battery-powered monitoring equipment was installed in two homes to begin to get more detailed humidity control performance data from the Green Dream II house and from one house at Project Home Again community, both in New Orleans. The New Orleans Project Home Again community represents the most unique opportunity for the Buidling America program to compare the humidity control performance of low-sensible-gain homes since the 2001-2003 study of 30 homes BSC conducted in Houston, TX. Plans were being developed and submitted to the Building America builder partner to monitor the humidity control performance and energy consumption of then of these homes. Five of these homes have a supplemental dehumidifier installed, and five homes do not have supplemental dehumidification. All of the homes have fully distributed whole-building ventilation. It is expected that this project will continue through 2011 and provide very useful comparative information on high performance homes of the same type, in the same climate, both with and without supplemental dehumidification. 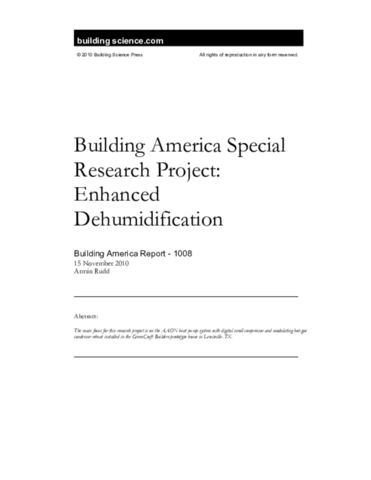