Sealed attic construction, by excluding vents to the exterior, can be a good way to exclude moisture-laden outside air from attic and may offer a more easily constructed alternative for air leakage control at the top of residential buildings.

The rationale behind this attic ventilation study was primarily twofold:

Ventilation is one of the most effective ways to deal with humidity problems in heating climates, but ventilation can be one of the major causes of humidity problems in southern humid climates (Lstiburek 1993). The problem of condensation in attics in hot-humid climates is caused by humid outdoor air coming in contact with cold surfaces in the attic. Although worse in coastal areas, this problem is not confined to them. The most offending cold surfaces are usually supply ducts, but they can be ceiling drywall and metallic penetrations through the ceiling if low interior setpoints are maintained. In much of Florida, it is not uncommon to have an outdoor air dew point of 24°C (75°F) and an attic air dew point of 29°C (85°F). When an attic surface temperature is lower than the attic air dew point, condensation will occur.

The attic air dew point can be higher than the outdoor air dew point because moisture stored in the wood roof framing at night is released during the day. This moisture adsorption-desorption process is driven by the relative humidity gradient between surfaces and the air in contact with those surfaces. Relative humidity of air at a surface is that of air in equilibrium with the surface moisture content of the material. The result of this attic moisture adsorption-desorption mechanism is summarized as follows:

The greatest problem with attic condensation will occur during the daytime when the air-conditioning (cooling) system operates for long periods, causing supply ducts, supply diffusers, and ceiling areas near supply diffusers to remain cold. With normal supply temperatures between 10°C and 13°C (50°F and 55°F), and attic air dew-point temperatures up to 29°C (85°F), it is easy to see how condensation can occur. Obviously, duct insulation, with the proper thermal resistance and surface emittance and properly installed to avoid insulation compression, can minimize condensation potential on ducts. However, the ducts must not only be insulated but also sealed against air leakage. Cold air leaking from supply ducts, creating cold surfaces in the moist attic environment, can also cause condensation-related problems.

Moving the entire air distribution system out of the attic and into conditioned space is good but is often impractical or impossible due to design and cost constraints. In the hot-humid climate, the best solution to eliminate the potential for moisture condensation in attics may be to keep the moisture out of the attic altogether by sealing the attic to the outdoors. TenWolde and Burch (1993) recommended that the roof cavities of manufactured homes not be ventilated in hot-humid climates due to conditions that could be conducive to mold and mildew growth (monthly mean surface relative humidity above 80%). A later report by Burch et al. (1996) came to the same conclusion, stating that their computer modeling results for Miami, Florida, “indicate that ceiling vapor retarders and roof cavity vents should not be installed in homes exposed to hot and humid climates.” In many cases, roofing layers that provide rain-proofing can also provide air sealing, and if stucco is used for the exterior wall finish, it can be easy to seal the fascia, soffit, and rake areas with stucco also. This would provide an attic that was sealed from outdoor air exchange, effectively excluding the moisture-laden air.

Another attic condensation problem, separate from the one discussed above but still related to outside moisture entering the attic through attic vents, sometimes occurs with metal roofing and an attic radiant barrier. In this case, condensation forms at night on the underside of metal roofing or radiant barrier exposed to humid attic air. Due to night sky radiation, the metal roof or radiant barrier temperature can be depressed below the attic air dew-point temperature, allowing condensation and possible water damage to ceiling materials to occur. In predominantly hot-humid climates, attics sealed to outside air exchange would correct this problem.

In modern residences, the challenge of achieving a continuous air infiltration barrier and thermal insulation barrier at the interior ceiling level is especially difficult. The air barrier, used to isolate the living space from the attic, is usually the taped drywall, while the thermal barrier is the insulation placed on top of the drywall. Typically, the ceiling is not a single horizontal plane but a series of horizontal planes, vertical planes (knee walls), and sloped planes, all intersecting to create the ceiling. Field inspections repeatedly show how the continuity of the air barrier and thermal barrier is compromised at knee walls, coffered ceilings, dropped ceilings, framed soffits or mechanical chases, recessed canister lights, fireplace flues or chimneys, and penetrations for plumbing, electrical, and space conditioning, etc. In reality, it is often impractical to try to maintain air and thermal barrier continuity at all of these locations. Airtight recessed cannister lights rated for insulation contact, foam sealing of penetrations, and full-depth blown insulation to cover the variations in ceiling plane can help to alleviate the problems, but at significant added cost.

The most cost-effective location to both air seal and insulate the attic may be at the roof plane rather than the interior ceiling plane. Where attic insulation is placed along the underside of the roof sheathing, this has been referred to as “cathedralized” residential attic construction (Rose 1995). In “cathedralized” construction, there may still be roof plane changes that create knee wall areas, such as build-over roofs where girder trusses are used, but these are usually few and relatively easy to access. In many cases, the roof layer (sheathing, roofing paper, flashing) that provides rain-proofing can also provide air leakage control. Some additional air sealing may be necessary at roof penetrations for vents and exhaust ducts. If stucco is used for the exterior wall finish, the fascia, soffit, and rake areas can be finished with stucco as well to provide an attic that is restricted from outdoor air exchange.

Another outcome of using the roof plane to create the air and thermal barrier is that the enclosed attic space is essentially inside the conditioned space. This space can be used to locate the space conditioning equipment and the air distribution system, and possibilities for additional storage are available. Also, the mechanical systems (electrical, plumbing, HVAC) placed in the attic are left exposed and accessible in the event of the need for repair or remodeling.

Current building codes across the United States require attic ventilation. In cold climates, the primary purpose of attic ventilation is to maintain a cold roof temperature to avoid ice dams created by melting snow (Tobiasson et al. 1994) and to vent moisture that moves from the conditioned space to the attic (Rose 1992; Lstiburek 1988; Spies 1987; Gatsos 1985). Melted snow, in this case, is caused by heat loss from the conditioned space. When water from melted snow runs out over the unheated eave portion of the house, it freezes and expands, often driving its way back up the roof and between shingles. In cathedral ceiling areas, a minimum one-inch air space is required between the roof sheathing and insulation, extending from soffit to ridge. In predominantly cold climates, for cathedral and “cathedralized” ceilings, a vented air chute that ensures an air gap between the roof sheathing and the insulation is the critical factor in controlling moisture accumulation in the sheathing (Rose 1995).

In hot climates, the primary purpose of attic ventilation is to expel solar-heated hot air from the attic to lessen the building cooling load. TenWolde and Carll (1992) also observed that “during summer, attic vents provide some cooling, but with sufficient ceiling insulation, the effect on cooling loads should be minor.” Roof shingle temperatures will be higher during no-wind conditions, leading to a higher heat load on the attic. Therefore, the greatest need for attic ventilation is when there is little wind pressure to force air in and out of the attic; then, stack effect is the prime air mover, driven by the attic to outside air temperature difference. Relying on stack effect alone can require such large vents that it is difficult to prevent rain entry (Ledger 1990).

Sealed attic construction, by excluding vents to the exterior, can be a good way to exclude moisture-laden outside air from attics and may offer a more easily constructed alternative for air leakage control at the top of residential buildings. However, the space conditioning energy use and roof temperature implications of this approach have not been extensively studied.

To evaluate the effects of sealed attics in hot climates on space conditioning energy use and roof temperatures, a computer modeling study was conducted for the Orlando, Florida, and Las Vegas, Nevada, climates. The computer model utilized was the FSEC 3.0 program (FSEC 1992) containing the attic model developed and validated by Parker et al (1991). The one-dimensional, finite-element program calculates combined heat and mass transfer, including conductive, convective, and radiant heat transfer, and lumped moisture modeling by the Effective Penetration Depth Method (Kerestecioglu 1989). Hourly simulations are performed using Typical Meteorological Year (TMY) weather data. In addition to building loads and heating and cooling system loads, individual surface temperatures and heat fluxes can be obtained, as well as air temperature and humidity ratio. Similar to a temperature setpoint, an optional humidity setpoint can be specified. The cooling system load will reflect the appropriate change in latent load, and if the specified equipment cannot meet the load, that will be reflected in the indoor air conditions. A real cooling machine performance model is used to calculate the air conditions leaving the cooling coil. A real thermostat model is also employed (Henderson 1992).

The reference house configuration used was a one-story, 139 m2 (1500 ft2) house that had been used in the past for many building energy modeling studies. Figure 1 shows a plan view of the house. The main house roof geometry is a 22.6 degree (5/12 pitch) hip roof with the ridge running east to west. Another hip roof runs over the garage, with that ridge running north to south. Table 1 lists the characteristics that were common to the Orlando and Las Vegas reference houses. The characteristics specific to the Orlando reference house are listed in Table 2. Model inputs were parametrically varied to isolate the effect of the item(s) in question. Table 3 lists the values that were changed for each Orlando simulation, along with a comment regarding the research question being asked. The characteristics specific to the Las Vegas reference house are listed in Table 4. Table 5 lists the parametrically varied model inputs for each Las Vegas simulation, along with a comment regarding the question being asked.

An early attic model (Fairey and Swami 1992), used primarily for modeling the performance of attic radiant barrier systems, treated the attic as two zones, an upper zone and a lower zone. An improved two-zone attic model (Parker et al.1991), used in the FSEC 3.0 program, accounts for detailed radiation, buoyancy, and wind-driven airflows and thermalstratification within the attic airspace. The upper attic zoneairflow was driven by wind, and the soffit inlet area wastreated as an orifice with a discharge coefficient. The upperattic zone had a defined thickness and ran parallel to thebottom of the roof sheathing. . . 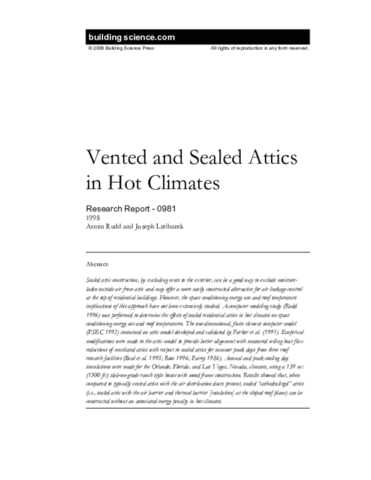