By creating a path for air to move, structural vents are supposed to prevent the buildup of moisture in an attic. This article was first published in Builder Magazine, January 2006.

A: By creating A path for air to move, structural vents are supposed to prevent the buildup of moisture in an attic. But a vocal group of building scientists says that, in hot and humid climates, vents will likely draw moisture into the house. And because vented attics aren't insulated, they get very hot in summer and very cold in winter. If ductwork runs through the space—as it does in many homes—those extreme temperatures can make the HVAC system work overtime in any climate. And because ducts are notoriously leaky, they will be heating and cooling the great outdoors. This group says that it's better to seal and insulate the attic, making it part of the home's conditioned space. This will reduce mold and mildew problems and save energy by keeping conditioned air leaking from the ducts inside the house.

Unvented attic proponents have just won the blessing of the code authorities, with a recent change to the International Residential Code (IRC). The change allows unvented roof assemblies if two conditions are met: there's no vapor retarder between the attic and the home's living space, and the builder insulates between the rafters with air-impermeable insulation. (Most moisture gets into an attic via air movement, not by diffusing through materials.) “We want to keep the living space and the nonhabitable attic space at the same moisture conditions,” says Armin Rudd of Building Science Corp. in Westfield, Mass., who helped write the new code language. The new language will be included in the 2006 version of the code. Expect it to show up in local codes 12 to 18 months later.

Not surprisingly, the code change faced some opposition. Earlier this year, the Asphalt Roofing Manufacturers' Association (ARMA) petitioned the International Code Council to repeal it. Dave Roodvoets of DLR Consultants in Westerville, Ohio, who represented ARMA, says that sealing the attic and insulating the roof could actually make a home more susceptible to rot by trapping moisture inside. “Ventilation compensates for a lot of sins,” he says. And he claims that proponents of the change don't have enough research to justify it: “Even the best researchers have only a few years of data on unvented attics in humid
climates. My experience in roofing is that it takes five to 10 years before you know what's happening in these situations.”

Some have charged ARMA with being less worried about moisture than about market share: The requirement for air-impermeable insulation means spray foam, which competes with the fiberglass insulation that some roofing manufacturers make. Roodvoets dismisses the charge. “It has nothing to do with the type of insulation,” he says. “Manufacturers have just seen too many instances where moisture trapped in the attic causes damage to the house.” He says that one shingle manufacturer (which he declined to name) did an experiment on homes being reroofed. It covered the roofs with a bituminous membrane and didn't vent it. Roodvoets claims that mold appeared after a few months, then disappeared when the attics were revented. He concedes that unvented attics may work when properly detailed, but says there's too much room for builder error. “They're not ready for prime time.”

Rudd says there's no evidence that sealed and insulated attics trap moisture. He says that researchers have found that, in hot, humid climates, buildings with unvented attics are actually less likely to have condensation and mold than those with vented attics. That's because, in these climates, most moisture comes from outside, and the foam keeps the attic dry by sealing that moisture out.

Humid attics wouldn't be so bad if it weren't for leaky air-conditioning ducts. Depending on the pressures in the HVAC system and the pressures in the house created by that system, these leaks can blow cold air into the attic or suck hot, humid air into the ductwork and into floor and wall cavities. Either way, you have a problem. Air leaking from the ducts can cool nearby surfaces enough that humid attic air condenses on them. Moist air pulled into the ductwork will get blown into the living space, where it can condense on walls and ceilings. Rudd says he has seen none of these ills in homes with sealed and conditioned attics (conditioned by means of passive connection to the living space). “When we started using spray foam, we were able to solve these problems,” he says.

As for the likelihood of mistakes, Rudd points out that foam contractors are trained and certified by insulation manufacturers. And while he can only point to five years of measured data, he says there have been no reported problems with unvented attics built in Florida as long as 10 years ago. “It's a proven building technology,” he says. As for Roodvoets' experiment, Rudd says that it's meaningless without more detail. “We publish the data from all our experiments, but they have yet to show any data.”

But what about cold climates? There, the temperature and moisture difference between inside and outside makes moisture more likely to diffuse through building materials. To stop it, builders up north will have to use a foam that's air and vapor-impermeable—either a closed-cell foam or an open-cell foam covered with a vapor-retarder paint. (For a comparison of open-and closed-cell foams, see “Bubble Wraps,” September, page 67.)

ARMA 2005's repeal was shot down at the IRC annual meeting in March 2005. Roodvoets says the association hasn't decided whether to continue the fight, but he isn't hopeful about repealing the new language. “It seems to have strong support among code officials.” . . . 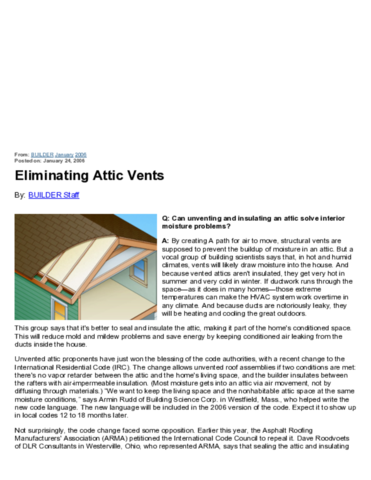