Adhered veneers, in which masonry units are directly attached to a substrate via mortar and ties without a drainage or ventilation gap, have become a very popular finish in residential and light commercial construction. Reprinted with permission from Journal of Building Enclosure Design, Summer 2009, pages 31-35.

Adhered veneers, in which masonry units are directly attached to a substrate via mortar and ties without a drainage or ventilation gap, have become a very popular finish in residential and light commercial construction. Typical applications apply thin masonry units over a bed of lath-reinforced mortar over a drainage plane (often a single layer of building paper, felt or housewrap).

When used over wood- or steel-framed walls, numerous reports of moisture problems and failures have been reported (Rymell 2007). The lack of a well-defined drainage space, and warm-weather inward vapor drives have been implicated as the reasons for these moisture problems.

Drainage can easily be provided by installing a second layer of building paper, particularly if one layer is a creped housewrap, and ensuring that flashing and weep holes are included. However, controlling inward vapor drives is more problematic, as building papers and housewraps are highly vapor permeable, and both the mortar and the masonry unit can store a significant amount of rain water via capillary absorption. During sunny weather following rain, water vapor stored in the masonry can be driven into the sheathing and into the stud bay, resulting in wood decay and condensation on air-conditioned interior surfaces. Air-conditioned buildings with low-permeance vapor retarders (such as polyethylene, vinyl wall paper, and aluminum foil) exacerbate this problem.

One proposed solution to avoiding the risk of these problems is the use of a vapor-impermeable air gap membrane behind the adhered veneer. A rigid plastic membrane will control inward vapor drives, but will not allow water vapor in the studspace or framing to dry to the exterior. Previous research suggests that a ventilated air space may allow the required drying (Karagiozis et al 2005, Straube et al 2004), but this has not been demonstrated in the field for an impermeable air gap membrane.

An experimental program was developed to measure and compare the performance of adhered veneer cladding side-by-side with an alternative method that uses a vapor-impermeable rigid polymer-based air-gap membrane. The objective of the study was to compare adhered veneer walls using a rigid plastic dimple sheet in place of asphalt impregnated paper as the sheathing membrane. These walls were installed in a natural exposure field testing facility in Waterloo, Ontario, Canada.

To collect field measurements for over a year of monitoring two types of wood-framed walls, one with an air gap membrane and another installed following standard practice. No penetrations through the test assembly were installed to eliminate the potential of bulk rain penetration problems. Each type of wall was faced either north or south in a test hut located in Waterloo, Ontario. Waterloo has an average of approximately 4300°C (7772°F) heating degree days (7800 HDD F). The hut is in an exposed location, free from obstruction by other buildings.

All of the test panels were 8 ft (2.4 m) in height, and 4 ft (1.2 mm) in width and shared construction of 2 x 6 wood framing on approximately 16 inch (0.4 m) centers with OSB sheathing, a poly interior vapor barrier, drywall finish and air barrier, and R19 (RSI3.5) fiberglass batt insulation.

Instrumentation included a temperature and relative humidity sensor in the drain space, as well as the stud space, moisture content sensors in the sheathing and framing, and temperature sensors on the cladding and drywall. All of the monitored framing is clear eastern white pine (EWP), and the remaining framing is generic SPF framing. Details of the instrumentation, data conversion and other details can be found in Straube et al (2002). The data was measured at five minute intervals and the average recorded on an hourly basis. The sensor layout is shown in Figure 1. Figure 1: Typical wall construction and sensor layout for full scale wall testing. The opening in the test facility was lined with a wood frame wrapped in a self-adhered flashing to help isolate the test panel from any other moisture sources. All of the instrumentation is located in the centre third of the wall over the entire height. This helps minimize edge effects and simulates accurate field performance of the enclosure system. Monitoring began on July 16, 2007 and is on-going.

The exterior and interior conditions were both recorded during testing. The exterior temperatures and relative humidity are shown below in Figure 2. Figure 2: Exterior temperature and RH during testing. The interior temperature and relative humidity were controlled for most of the testing period. The relative humidity was kept between 40 percent and 50 percent for most of the testing period. As the test walls have sealed drywall air barriers and continuous polyethylene vapor barriers, interior moisture loads do not affect the test wall hygrothermal conditions.

The thirty-year average for monthly average temperatures in Waterloo region are indicated by the black lines.

The intentional wetting event is shown on some of the analysis graphs as a dashed red vertical line at the time of the first water injection. Following the analysis of performance under normal conditions, the intentional wetting event is analyzed in detail using the moisture content sensor located in the sheathing at the water storage media location (as can seen in Figure 4). The sheathing moisture content at all three locations in the standard wall was greater than 16 percent, and approached 20 percent, from approximately October 2007 to May 2008. . . 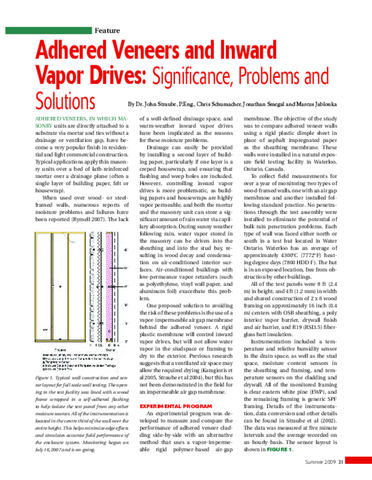