A hockey1 puck is 1 inch thick and 3 inches in diameter (Photograph 1). You can easily slip one into the airspace between a brick veneer and building paper. Now a single puck in an airspace like that causes no grief as penetrating rainwater drains down each side of the puck (Figure 1a). Two pucks are not an issue either (Figure 1b). But three, if they are configured as in Figure 1c, lead to a nightmare. Water can build up and be held in the space – presto – we have “perched” water. Huh? Yes, perched water – look it up.2  This perched water exerts a force on the wall assembly. How much of a force? Read on. 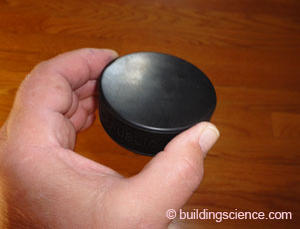 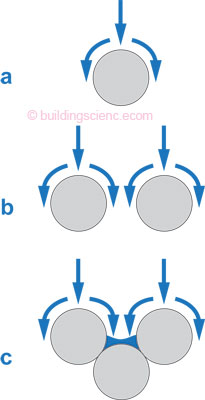 Figure 1: Hockey Pucks—A single puck in an airspace like that causes no grief as penetrating rainwater drains down each side of the puck (Figure 1a). Two pucks are not an issue either (Figure 1b). But three, if they are configured as in Figure 1c, lead to a nightmare. Water can build up and be held in the space – presto – we have “perched” water. 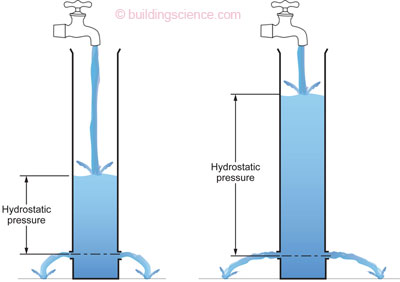 Another way of looking at this is that 1 inch of water exerts a hydrostatic pressure of 250 Pascal at the bottom of the straw. Sometimes we call it “hydrostatic head” or just “head”3 (Figure 2). A Pascal is named after a dead French guy named amazingly enough Pascal. Blaise Pascal was a physicist who came up with something called Pascal’s Law, among a whole bunch of other things. Pascal was the real deal, a brilliant guy, who not only knew what the scientific method was, but defended it.4  Pascal’s Law gives us the definition of hydrostatic pressure. Legend has it that he was trying to figure out how the water level in wells was affected by atmospheric pressure and he ended up with his famous equation.5

So where are we going with all this? It does not take much rain falling on a building to leak through a cladding and end up with some perched water. We need to put this perched water into perspective. To do this we need some wind blowing against a wall.

When wind blows against a building dead on at the center of the wall we have something called “stagnation pressure” (Figure 3). We now need to go to another dead guy, this one either Dutch or Swiss, depending on who you are arguing with, named Daniel Bernoulli. Daniel is not to be confused with Jakob of probability fame or with Johann of calculus fame. Wow, what an amazing family – check out the family tree sometime, it includes Hermann Hesse of Steppenwolf fame – the book, not the rock group of Born to Be Wild fame. Those Nobel Prize winners in literature can often be confused with musicians late at night. 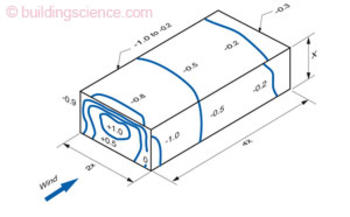 Figure 3: Stagnation Pressure—When wind blows against a building dead on at the center of the wall we have something called “stagnation pressure.”

Anyway, using Bernoulli’s Principle, a 35 mph wind blowing against the middle of wall exerts a pressure of around 150 Pa. That’s about 60 kilometers per hour to young Canadians and my European friends. In real terms that is 0.6 inches of water and converting to Joe Math around ½-inch of hydrostatic head. So a 35 mph wind blowing against a wall gives you about a ½-inch water gauge (w.g.).

So let’s assume that it is raining – and the wind is blowing at 35 mph – engineers would call this “wind driven rain.” It’s that gift again. Now to put this into perspective, rain and high wind events do not usually occur at the same time. It is a real miserable storm that gives you a bunch of rain and a 35 mph wind at the same time. This is what we call a “significant rain event.”6

So why am I obsessing about this 35 mph thing – it has turned up in all of my examples so far? Check out Graph 1, which is a plot of wind speed in mph vs. stagnation pressure in Pa. Don’t you just love these mixed units? Patience, folks, patience. 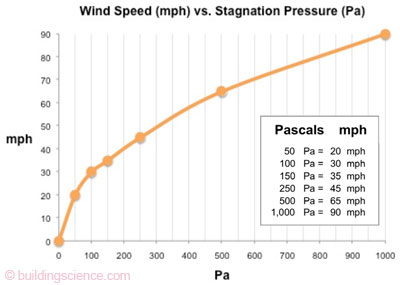 In most of North America the 3-second gust basic windspeed for structural design is 90 mph. This is 1,000 Pa. Guess what 15 percent of 1,000 Pa is? Yup, 150 Pa. Design wind loads for rainwater hold out for windows and glazing systems are typically set at 15 percent of the 3-second gust basic windspeed. Why 15 percent? Why not 10 percent? Why not 20 percent. There is no technically justifiable reason for the number. It came out of a body orifice. Back in the day there were huge arguments about this value. There still are.

Although there was not a technically justifiable reason, there was a practically justified reason. The window industry back in the day figured out that most of the windows they were building could pass the 15 percent wind load and went along with it. So the 15 percent was based on what was being made at the time. Having said that, it was also pretty reasonable. Why? A couple of reasons. For one, most of the windows were kinda working. Now go back to Graph 1. Notice the bend at – wait for it – around 35 mph? It gets really ugly when you get over 40 mph. And finally, as mentioned earlier, the real world didn’t give you many wind and rain events simultaneously over 35 mph.

Let’s say you want to create a test for rainwater resistance for assemblies – say windows – a place to start is defining wind driven rain. For the wind part we picked 150 Pa – or 35 mph for low-rise buildings. Experience, the “bend,” and judgment were involved. This appears to be the basis for testing residential windows at a pressure difference of 150 Pa. Also as mentioned earlier, this part seems pretty reasonable for me.

Unfortunately, the unreasonable part is that most tests run for only 15 minutes, whereas most real wind driven rain events in most places where people live run between 1 and 2 hours. It gets weirder, if you want to create a test you also have to pick how much water to put on the window – and where on the window to put it. Most standards pick around 5 gallons per hour per square foot (3.4 L/m2-min) applied uniformly. Do you have any idea how much rainwater this represents? This is around 8 inches of rain per hour. Are you kidding me? The only guy that could have come up with this number is a 950-year-old guy walking animals 2 by 2 into a big boat. At this point you think it couldn’t get weirder than this – but yes it does. Wait for it – even the size and type of droplets are specified – we now have “calibrated rain.”

Here comes an “ah hah” moment. Test folks are more interested in repeatability than reality. The more variables that get specified for test purposes the farther removed from the real world the test becomes. I have never seen calibrated rain fall on a real building. Anyway, forget about all of this, except the 35 mph part.

So what does this mean in practical terms? Think about this as reality check. We install building paper and building wraps over sheathings by “stapling” them. We then attach siding by – wait for it – nailing it. Most walls have thousands of holes in them. How come they don’t leak? No hydrostatic pressure, no problem. “All leaks are caused by holes – but not all holes cause leaks.”7  Just because you have a hole, does not mean you have a problem. What are the odds that you are going to have holes? Pretty high. But, if you drain the water away no problem.

Installing vinyl siding over building paper even though there are thousands of holes in the building paper is not a problem because vinyl siding does not hold the water against the wall. With wood and fiber cement siding and trim you need to install the wood siding and trim over a small gap to control hydrostatic pressure. This gap can be as small as a ¼-inch and the spacer can be a strip of thin foam (Photograph 2). With cedar shingles you can use a drainage mat (Photograph 3). You can also use a drainage mat with stucco as well – except you need to install building paper over the drainage mat so that it does not fill with the mortar from the stucco scratch coat. With brick veneers you need to keep the air gap open – no mortar droppings (good luck with that) or install a drainage mat as you would do with stucco. Or, a draining “house wrap.” Mortar droppings don’t matter if you have drainage behind them or around them. 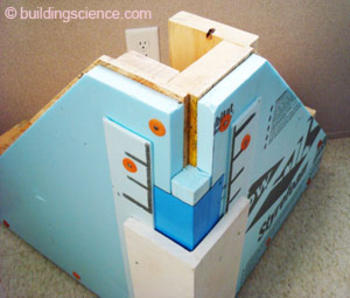 Photograph 2: Gap Behind Siding and Trim—With wood and fiber cement siding and trim you need to install the siding and trim over a small gap to control hydrostatic pressure. This gap can be as small as a ¼-inch and the spacer can be a strip of thin foam. 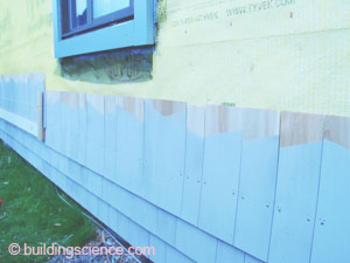 Where things often get messy is around windows and doors – specifically trim around window and door openings. In hot-humid climates such as Florida it is pretty common to use a mass wall with direct applied painted stucco as the rainwater control strategy. Rainwater runs off the surface of painted stucco pretty readily. A smooth surface with nothing to catch the water does not lead to an increase in hydrostatic pressure. Now add a precast element around window openings for aesthetic reasons (Photograph 4). If you do not address perched water you are doomed. It is absolutely critical to drain the back surfaces of these trim elements to prevent perched water and resulting hydrostatic pressure. There are countless sad stories of trim catching water at window to wall interfaces leading to wind driven rain driving forces in the absence of wind. 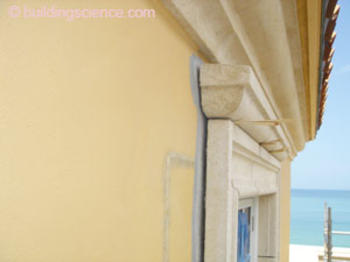 Photograph 4: Precast Trim—It is absolutely critical to drain the back surfaces of these trim elements to prevent perched water and resulting hydrostatic pressure. There are countless sad stories of trim catching water at window to wall interfaces leading to wind driven rain driving forces in the absence of wind.

Let’s kick it up a notch and install precast units over the entire surface of a stucco wall (Photograph 5). Nice house eh? Lot’s of houses like this in Florida. Interesting observation from a builder no longer doing business. Similar houses in a similar location with direct applied painted stucco over mass walls did not leak, but where the houses were “upgraded” by installing “mud-set” precast elements over the top of the direct applied stucco leakage was common (Photograph 6). The “blobs” were too big, and there were too many of them, and they were too close together and lead to perched water. I bet any hockey playing or hockey loving builder who knew about Pascal and Bernoulli could have figured out why. 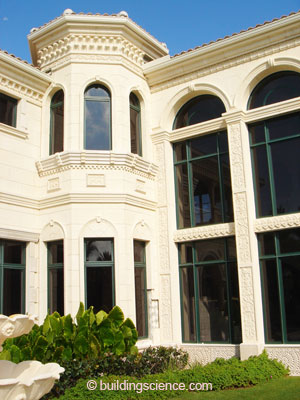 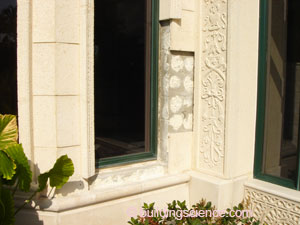 Photograph 6: Perched Water—The “blobs” are too big, and there are too many of them, and they are too close together and lead to perched water. 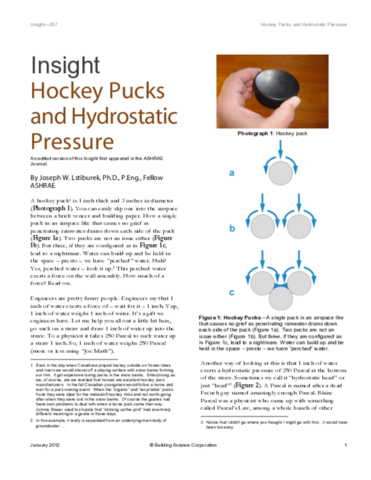