Sandstone is a 49-home subdivision located in Ellendale, DE. The project is Colter Construction’s first entry into community-scale development. The homes are intended to be attractive to the first-time homeowner, and to empty nesters, two strong markets in the region. The company has considerable experience building energy efficient custom homes in Sussex County.

Founder and owner Terrance Babbie contacted BSC in May of 2009 for help in bringing his construction practices up to the state of the art. Terrance was already familiar with much of BSC’s published materials, and works with subcontractors who are also accustomed to standard energy measures in the custom market. This experience was invaluable in rapidly implementing BSC’s recommendations for airtightness, insulating sheathing, duct layout, and other efficiency measures.

The homes are single-family detached residences of 1200 to 2000 ft2 with unvented crawlspaces. The community is located in DOE Climate Zone 4A, a mixed humid climate. Humidity control and mechanical efficiency, for both heating and cooling, were of special concern. 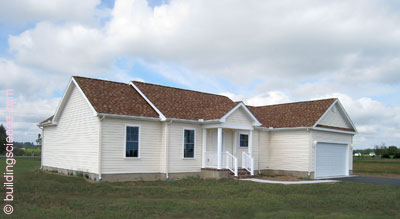 The Building America goals for the community were to achieve a minimum of 40% source energy consumption reduction when compared to the Building America benchmark. The builder’s goal was to achieve a HERS 50, which proved to be a slightly more stringent requirement. Because heating and cooling together account for half of the energy consumption in the base (unimproved) model, most of the improvements made are to insulation and airtightness. However, because the community is located in a mixed-humid climate, cooling and dehumidification are active for much of the year.

To achieve the airtightness goals for the project, a critical seal approach was used. Common air leakage areas, such as rim boards and partition wall tops, were sealed with acrylic latex caulk applied during assembly. The primary air control layer over most of the wall and ceiling area is the drywall, which is sealed to the framing at all edges. This is augmented with a secondary air control layer at the insulating sheathing. All vertical and horizontal joints of the insulating sheathing are taped on the exterior, and the foam panels are sealed to the framing members with a bead of spray foam on the interior.

One-and-a-half inches of polyisocyanurate board foam is used over the exterior walls to increase thermal resistance and control condensation in the wall cavity. Where structural insulation is required, the insulation thickness is reduced. This insulation thickness produces an efficient and durable wall while permitting easy attachment of vinyl siding. Two inches of extruded polystyrene insulation on the crawlspace walls and R-50 blown attic insulation completes the enclosure.

In the Delaware climate, it is important to provide efficient equipment for both heating and cooling. The first house was built with a dual fuel heating system, which will not be used on later houses due to difficulties with its controls. A 16 SEER split system provides cooling. A dehumidifier connected to the main supply ducts provides latent cooling when sensible cooling is not required.

All of these strategies were modeled in an annual hourly model. The graph above shows the total household source energy use as predicted after each upgrade. The house as built meets both the 40% Building America and the 50 HERS score target. 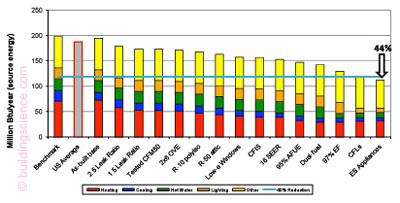 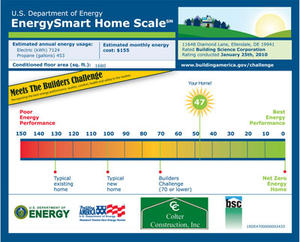 Roof Assembly: The roof assembly is designed as a vented attic framed with trusses. 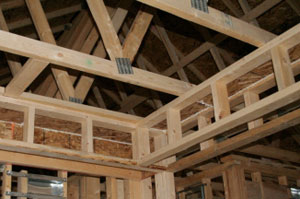 Wall Assembly: The walls are framed with 2x6’s on 24” centers. One-and-a-half inches of polyisocyanurate board insulation was installed on the exterior of the frame, reduced to 1” where OSB is required to provide racking resistance. 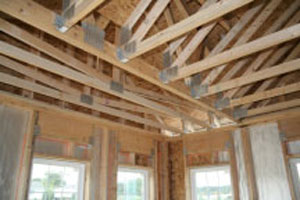 Window Specifications: The windows are BF Rich vinyl double paned low-e with argon. These windows have a U-Value of 0.27 and SHGC of 0.24. The windows were installed over a flexible membrane pan flashing to drain water that penetrates the windows. 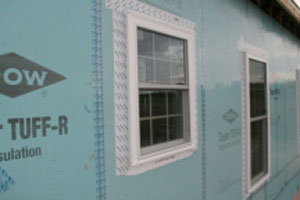 Air Sealing: Dropped soffits in the kitchen present a challenge to air barrier continuity. OSB blocking above the soffits allows the air barrier to continue in the same plane. This is much easier to execute than would be bringing the air barrier down around the soffit. A secondary airseal was accomplished between the exterior sheathing and the building frame. All framing members at the rim joist were connected with caulk to provide continuity between the foundation wall below and the wall assembly above. 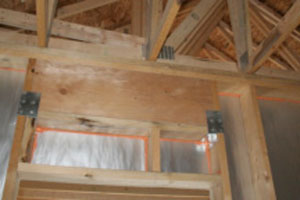 Foundation Assembly: The crawlspace floor is covered with 6-mil polyethylene to prevent infiltration of air, moisture, and soil gasses. Joints in the groundsheet are sealed with mastic. The foundation wall is concrete block, with 2” of XPS on the interior. 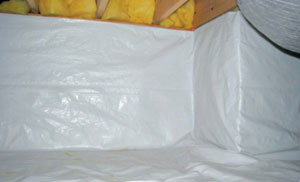 Regular phone calls between BSC and the builder throughout construction of the first house allowed contractors to raise questions and concerns as they arose. Appropriate details were selected from the Builder’s Field Guide and the BSC webpage. Together with dedicated and experienced construction crews, this resulted in exceptional improvement relative to prior houses. Later houses proceeded smoothly following the same details used on the first.

Details requiring particular attention included insulation at headers, at the rim board, and where interior partitions meet the exterior walls. BSC provided a sizing table for single headers from the latest IECC code, allowing thicker insulation at the header. The builder selected details of insulation placement which he felt were most compatible with his construction crews. All of these areas were assembled so as to provide continuous insulation.

As construction of new houses is ongoing, BSC continues to recommend best practices which could be adopted. Photographs of key details taken during BSC’s site visits help to explain possible areas of improvement. 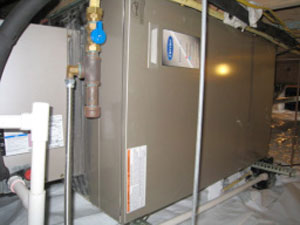 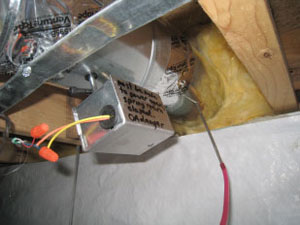 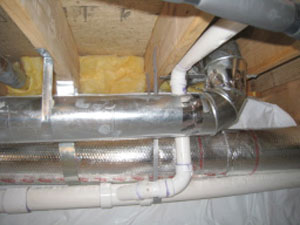 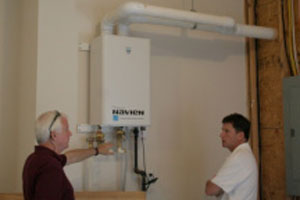 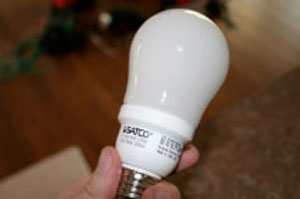 After construction was complete but before the sale was closed, BSC tested the performance of the house to make sure it met BSC’s Building America Performance Criteria.

The Duct Blaster® test found 202 total duct leakage at 25 Pa. While this is a higher CFM than we would like to see, which is typically 10% of system CFM, it is fairly typical with sheet metal ductwork. However, the Duct Blaster® test found very low leakage to the outside—29 cfm with ducts and interior at 25 Pa. Since this is a measure of the actual energy penalty, the moderate system leakage is acceptable.

Pressure measurements during normal operation show that all bedrooms are within 3 Pa of the main space. This indicates sufficient return path area. 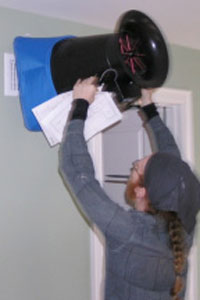 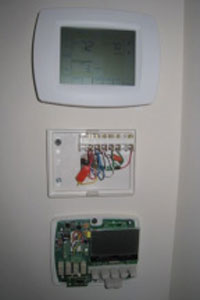 As of the end of 2009, two houses have been completed, and more are underway. The energy and durability improvements showcased in these first homes are also being incorporated into new custom homes built by Colter Construction. These homes are larger and have more complicated geometry, but can be insulated with the same materials and techniques.

The Sandstone community will be built out over the next few years to the specifications developed for the first home. The exceptional performance of these homes, primarily represented by HERS score, has become a cornerstone of marketing for the community. 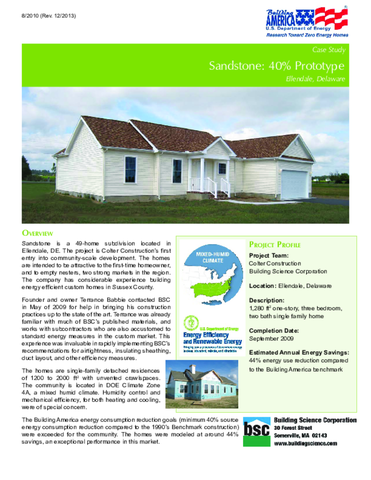