We continue to insist on putting ductwork in attics. It is a dumb idea from an energy perspective – a couple of HERS penalty points at a minimum - and we continue to see condensation on the ductwork in the summers. We have tried almost everything to get the ductwork "inside". We have tried dropped ceilings (Photograph 1 and Photograph 2). We have moved the "inside" to the roof deck (Photograph 3). We have tried "burying" the ducts (Photograph 4). Almost nothing has worked. Well, not really. Dropped ceilings have worked. Moving the inside up to the roof deck – aka "conditioned attics" has worked. And "burying" the ducts has worked. The "weasel words" to note is the definition of "worked". What do we mean by "worked". If you mean "the physics" and "performance" you would be correct. If you mean "cost" and "convenience" and "ease" you might not be correct. Photograph 2: Dropped Ceiling “Look” – Not everyone likes the look of dropped ceilings. Photograph 3: Conditioned Attic - It is not easy to move the “inside” to the roof deck. Actually, it is easy. But it is expensive and that makes it not easy. Let me explain. Spray polyurethane foam makes it easy from a technology, performance and installation perspective. But it is more expensive than going to dropped ceilings. It is not easy to move the “inside” to the roof deck3. Actually, it is easy. But it is expensive and that makes it not easy. Let me explain. Spray polyurethane foam makes it easy from a technology, performance and installation perspective. But it is more expensive than going to dropped ceilings.4 How about insulating above the roof deck with rigid insulation? See expensive and add the words “not easy” and “might look like #@%. We were here some time ago (see BSI-063: Over-roofing—Don’t Do Stupid Things).

How about “burying” the ducts? We are going to spend some time here (Figure 1). I am really coming around to this approach5. We took a run at this also quite some time ago (see BSI-074: Duct Dynasty). At the time no one quite knew what R-value the ducts needed to be when you buried them. I cleverly avoided the issue back then. When we did it for real I would take a guess and then double the guess. Hey, when your butt is on the line you don’t take chances. Well, now we know – thanks to some real nice work by the same folks who I thought were crazy the first time I heard about the approach6. There has to be some kind of catch? Yes. There always is. The ducts have to be airtight – really airtight. How airtight? I say less than 5 percent of the rate flow as tested by pressurization to 25 Pascals. And the ductwork insulation has to be less than 1 perm or enclosed in a layer or surface that is less than 1 perm. You need to keep the vapor in attics from getting to the cold duct surfaces. Where does all this come from? Field experience. High-density spray polyurethane foam works when we spray it over R-6 and R-8 ducts in hot humid and mixed humid climates at a little more than 1-inch thick. But low-density foam does not work.

And don’t forget about the boots and penetrations. Same requirements as for ducts. Now to get really weird or interesting or wonky or sleazy…I love this kind of stuff… Let’s say, you have sweating ductwork and boots and you are in Fort Lauderdale or Atlanta? Seal up your soffit vents and turn your ridge vent into a vapor diffusion port (Figure 5, Figure 6 and Figure 7). Huh? We were kinda here with BSI-088: Venting Vapor. In a classic vented attic, moisture is brought into the attic during the summer via air change. Outside air enters at soffit locations and exits up high at ridge vents or upper vent openings. This outside air is the source for the condensation on your attic ductwork. The attic venting is responsible for the sweating ducts. So why vent the attic at all? Oh, boy. We are not going to go all the way there…but we will say that a really good reason to vent the attic is to keep the roof from rotting during the winter when the source for attic moisture is the house itself. So how do we keep the roof from rotting during the winter if we do not vent it? Ah, here is the trick, we remove the moisture from the attic via vapor diffusion rather than air change. Pretty neat eh?

I know I mentioned this way back when…but this approach of sealing soffit vents and turning upper vents into vapor diffusion ports also prevents the roof from getting wet during hurricanes (there is no roof vent that does not leak rainwater during a hurricane) and it prevents burning embers from entering a vented attic in wildfire regions. All good things. No sweat, eh?7 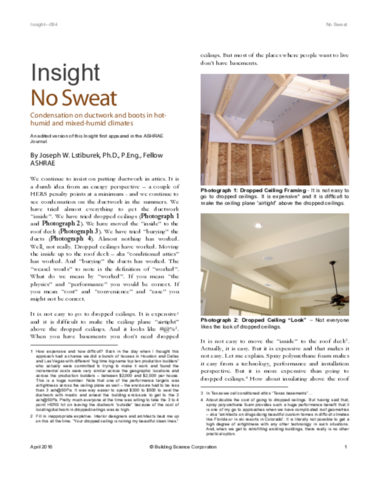