Exterior sheathing insulation is an effective strategy in increasing the overall R-value of wall assemblies; other benefits include decreasing the effects of thermal bridging and increasing the moisture durability of the built assembly. Vapor-permeable exterior insulation, such as mineral board or expanded polystyrene foam, are one such product that may be used to achieve these benefits. However, uncertainty exists on the effects of inward driven moisture and the interaction of increased sheathing temperatures on the moisture durability of the edifice. To address these concerns, Building Science Corporation (BSC) conducted a series of hygrothermal models for cities representing a range of different climate zones.

Exterior sheathing insulation is an effective strategy in increasing the overall R-value of wall assemblies; other benefits include decreasing the effects of thermal bridging and increasing the moisture durability of the built assembly. Vapor-permeable exterior insulation, such as mineral board or expanded polystyrene foam, are one such product that may be used to achieve these benefits. However, uncertainty exists on the effects of inward driven moisture and the interaction of increased sheathing temperatures on the moisture durability of the edifice.

Inward driven moisture is only a prominent concern when a wetted moisture storing cladding is exposed to elevated levels of solar radiation. The elevated cladding temperatures create a high vapor pressure which drives the moisture into the wall assembly. To mitigate inward flowing moisture, it suffices to utilize a low permeance water resistive barrier (WRB). However, this also inhibits outward flowing moisture.. The complication arises when, during the heating season, outward flowing moisture is inhibited by the WRB, potentially resulting in condensation. The alternatives to minimize moisture accumulation are to either increase the surface temperature of the sheathing (with the use of exterior insulation), or to enable outward drying of the sheathing. To address these concerns, Building Science Corporation (BSC) conducted a series of hygrothermal models for cities representinga range of different climate zones (DOE Climate Zones 1, 3, 4, 5, and 7). A parametric study was conducted to assess the range of impact of varying levels of exterior insulation (0", 1", 2", 4" of mineral board, R4 per inch) and permeances (0.1, 1, 10, 50 perms) of the WRB . Other modulated variables include the presence of interior vapor control (polyethylene sheet, Kraft paper), type of structural sheathing (plywood or OSB), and the air exchange rates of the gap behind brick cladding (1-4 air changes per hour).

Section 1.0 provides a complete description of the research project and a rationale for the investigations as well as the cost basis. Section 2.0 details BSC's research method, approach, the key research questions that were examined, and the procedures utilized to analyse the problems. Section 3.0 describes the analysis that will be completed and Section 4.0 summarizes the results.

The moisture performance of walls with higher cavity R-values using permeable insulations, particularly in homes with lower air exchange rates, is poorly understood. Higher risks of air leakage wetting and reduced diffusive drying potentials are theoretically expected to increase moisture risk (Straube & Smegal, 2009), but little research is available to better quantify this risk. Adding insulating sheathing to existing walls with these characteristics is one way of further increasing the thermal resistance of these assemblies. However, for other reasons these exterior insulating sheathing products may reduce the outward drying potential of the assembly. Insulating sheathing are available in a range of permeances from very high (i.e., more than 70 US Perms) to very low (i.e., under 0.1 US Perms). There is a need for further research to identify the circumstance in which a vapor-permeable insulating sheathing, defined as having a permeance greater than 5 perms (IRC, 2012) (such as mineral wool, glass fiber) would be preferred over a lower permeable product. This research also includes consideration for the impact of several common cladding types, such as vinyl siding, stucco, wood, fiber cement siding, and brick.

The biggest concern regarding vapor permeable insulating sheathings is inward driven moisture caused by solar radiation hitting a wetted moisture storing cladding, a problem that occurs in all climates. When a wetted reservoir cladding is exposed to elevated solar radiation, a high vapor pressure is created behind the surface of the cladding. This high vapor pressure results in outward drying but also creates an inward vapor drive, particularly if the indoor is air conditioned to a lower vapor pressure. The vapor permeance of the weather resistive barrier (WRB), as well as any structural sheathing (i.e. OSB, plywood, etc) may throttle inward vapor drive, but the degree of vapor restriction is unknown and the effects on the moisture durability of the wall assembly has not been quantified in such circumstances. A complication arises when a low vapor permeance WRB is used in cold climates where outward vapor flows may occur. A low permeable WRB with no insulating sheathing with vapor-permeable cavity insulation results in decreased sheathing temperatures, which may result in condensation. To mitigate this, either the sheathing temperature must be elevated, through the use of exterior insulation, or a more vapor-permeable WRB must be utilized, to enable outward drying. However, the ideal range of WRB permeances and exterior insulation is not well defined or understood.

Currently, a range of cost-effective options exists for retrofitting the existing building stock, but fall beyond the scope of this project. The addition of exterior insulating sheathing is frequently cost prohibitive; however, removal of the cladding is a necessary step to access the sheathing. Only select circumstances warrant the addition of exterior insulation: a degraded cladding that requires replacement (whereby the addition of a nominal amount of exterior insulation results in little additional cost), or a building owner who desires to significantly reduce the energy consumption of the structure caused by low thermal resistance of the building enclosure. The results from this research project may be equally applied to new construction with similar parameters.

Extensive research has been conducted by others into the effects of inward driven vapor in wall assemblies. Research has demonstrated that accumulation of moisture in interior finishes caused by inward driven moisture may pose moisture durability problems with the wall assembly (Wilson 1965, TenWolde and Mei 1985, Straube and Burnett 1995, Pressnail et al. 2003, Dérome et al. 2010, Dérome and Saneinejad, 2010, Carmeliet and Dérome, 2012). It was found that this phenomenon occurs in all climates (from hot and humid to cold and dry climates) and in a range of different wall assemblies, all to varying degrees.

Many strategies have been provided by researchers in mitigating the effects of inward vapor diffusion, such as ventilation behind the reservoir cladding or the use of vapor retarding WRB membranes. However, the use of vapor retarding membranes may result in winter time condensation problems in retrofit homes with permeable cavity insulation and no exterior insulation. The cavity insulation results in decreased sheathing temperatures that may, depending on the interior and exterior climates, cause the sheathing to reach temperatures below the interior air dew point. While vapor diffusion may pose condensation problems, the most prominent concern is due to air leakage condensation (Quirouette, 1985; CBD 5 A.J. Wilson, 1960; CBD 23 A.J. Wilson, 1961), which can carry more moisture than vapor diffusion.

Overall, the goal of the U.S. Department of Energy's (DOE) Building America program is to “reduce home energy use by 30%-50% (compared to 2009 energy codes for new homes and pre- retrofit energy use for existing homes).” To this end, we conduct research to “develop market- ready energy solutions that improve efficiency of new and existing homes in each U.S. climate zone, while increasing comfort, safety, and durability.”1 The addition of exterior insulation enables increased wall R-value more than would otherwise be achievable in standard 2×4 in. or 2×6 in. stick frame construction.

The addition of an extra 1.25 in. of continuous vapor-permeable exterior insulating sheathing can provide an additional R5 to a wall assembly while significantly reducing the effects of thermal bridging. On a 2×4 in. at 16 in. on center stick frame construction with R13 batt insulation, this results in a 30% energy reduction of space conditioning site energy losses through the opaque wall assembly. Increasing the thickness of the exterior insulation sheathing only increases the energy savings. Furthermore, the addition of exterior insulation decreases the propensity for cold weather condensation forming on the back of the structural wall sheathing, as well as providing superior insulation performance by minimizing thermal bridging. These factors will reduce embodied energy through improved durability and lifespan and greatly reduce energy use for space conditioning for the life of the enclosure.

The implementation of outboard insulation wall systems is easily included into any residential building retrofits with only minor detailing required around wall penetrations and fenestration. Used in conjunction with other recommended high-R-value systems (Straube and Smegal, 2009), the use of permeable exterior insulating sheathing can significantly reduce the space conditioning energy consumption of residential homes helping to meet the Building America goals of 30%- 50% energy use reduction.

To ensure the cost-effectiveness of the retrofit proposals, a detailed BEopt analysis was conducted. Each proposed wall assembly will be assigned a cost relative to standard construction. These costs will be developed in partnership with BSC’s prototype and community builders.  It is important to note that, should an exterior insulating strategy be adopted for a building rehabilitation project, the incremental costs of adding a nominal thickness of exterior insulation and application of a WRB with the desired vapor permeability will be very small, as the costs of the cladding, sheathing, etc., already included as part of the building rehabilitation. However, if the sole intent of the retrofit is to increase the overall wall R-value, then the associated costs of the proposed retrofit will be significantly higher.

It cannot be ignored that an initially slightly more expensive system may have to be implemented to save a significant amount of energy over the entire life of the structure, which will be much longer than a standard mortgage. Research has shown that walls exceeding an R-value of 35 can financially pay back during the life of the initial mortgage through energy savings while reducing greenhouse gases (Grin, 2008). Because the building enclosure is designed to use less energy, the energy and greenhouse gas emissions savings extend for the life of the building, not just the duration of the initial mortgage or retrofit loan.

Improving the moisture tolerance and durability of an assembly will also add into the equation of life cycle cost analysis, as decreases in expenditures will be required for repairs and remediation caused by biodegradation. Furthermore, the longer the assembly lasts, the more energy it will use over its lifetime and the more the initial energy efficiency savings will accrue. Proper detailing of the assembly is also important to ensure that, over the life of the assembly as components require replacement (such as windows and doors), the assembly easily allows these replacements without risking damage.

1.5 Tradeoffs and Other Benefits

Each of these components are interconnected. The increased R-value and airtightness improve energy efficiency and occupant comfort through reducing drafts and improving surface temperatures. The added durability of the system reduces maintenance requirements, increases the lifespan of the structure, and tolerance to the possible operating conditions within the home.

The following research questions were answered by this project.

In the literature, an ASHRAE Research Project RP-1235, The Nature, Significance, and Control of Solar-Driven Water Vapor Diffusion in Wall Systems, by D. Dérome, A. Karagiozis, and J. Carmeliet (2010) was found. In it, it synthesises results from small and large scale laboratory testing, field testing, and computer simulations. The experimental testing was conducted by . . . 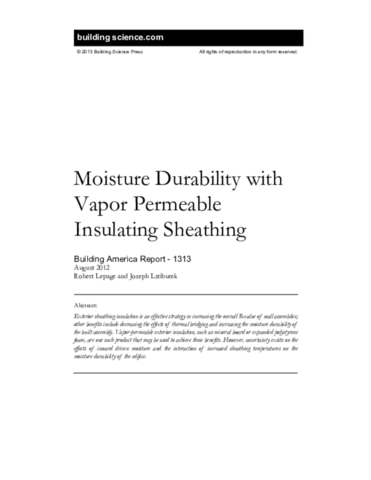