The following Guideline addresses moisture control strategies for assemblies that are insulated with dense-packed insulation. The vast majority of dense-packed insulation is installed in retrofit applications. Pioneers of the weatherization movement developed the dense-pack insulation method: loose fill insulations (primarily cellulose) were forced into the empty framing spaces in existing wall, roof & floor assemblies using insertion tubes and high pressure blowers. The method prevented insulation voids and ensured that cavities were completely filled with higher densities of cellulose insulation. Fitzgerald, Nelson & Shen provided one of the earliest explanations of the dense-pack insulation technique in an article for the January 1990 Home Energy Magazine (HEM 1990).

Many contractors and cellulose sales people falsely believe that dense-pack assemblies are 'airtight'. This has been shown not to be the case (Derome 2005, Schumacher 2010) – with disastrous consequences in mixed and cold climates, including climate zones 5, 6, 7 and 8, where roof rafters have been 'dense packed' with no provision for rafter ventilation (to remove moisture) or for control of condensing surface temperatures (to minimize moisture accumulation) (Lstiburek 2010). Approximately two (2) assemblies in ten (10) fail – typically within 10 years (Fitzgerald 2010).

This document, Guideline for Moisture Control in Dense-Packed Assemblies, focuses on dense- packed insulation retrofits to roof assemblies in cold climates. It is expected that other assemblies (e.g. retrofit floor applications, double-stud high performance walls in new construction, etc.) will be addressed in future guidelines.

This Guideline identifies, describes and compares four strategies that designers, builders and manufacturers have implemented to avoid moisture problems in dense-packed roof assemblies.

The Guideline for Moisture Control in Dense-Packed Assemblies is intended for designers and contractors working in the weatherization and renovation industries.

Acknowledgements: Unless otherwise noted, all figures and photos created by Building Science Corporation.

For over 20 years now the retrofit industry has employed dense-pack insulation techniques to install insulation in poorly and uninsulated assemblies that are difficult to access (usually because they are enclosed by interior and exterior finishes that cannot be removed). Dense- packed insulation is increasingly selected for upgrades to existing wall assemblies, floor assemblies and inaccessible roofs (e.g. low-slope roofs, cathedral ceilings, etc.)  Dense-packed insulation may also be used in the construction of the cathedralized attic assemblies necessary to bring ductwork into the conditioned space or to convert traditional ventilated attics to conditioned living spaces.

It is generally accepted that the dense-pack insulation technique improves the thermal comfort and performance of the building by reducing both conductive heat loss and air leakage through enclosure assemblies; however, the approach is not without its risks and industry experience has led some to suggest that dense-packed roof assemblies need greater attention (Lstiburek 2010).

The largest potential moisture source in roof assemblies is bulk water leakage. Bulk water is introduced at the exterior of roof assemblies in the form of rainwater and meltwater (from ice & snow). The means and methods to prevent the bulk water penetration and moisture damage are well developed and understood. Roof underlayment and eaves protection prevent incidental water (i.e. water that penetrates the roofing) from moving below the sheathing and into the body of the assembly or through to the occupied space (Lstiburek, 2006). Flashings prevent bulk water penetration at interfaces with walls, at openings (e.g. windows and hatches) and at service penetrations (e.g. plumbing & electrical stacks, air intake/exhaust vents, etc.) (Lstiburek, 2006).

Built-in moisture is not typically a significant moisture source for dense-packed roof assemblies. Dense-pack insulation contractors avoid using wet insulation materials as these tend to plug up the installation equipment (i.e. the hoses and injection tubes). Furthermore, dense-packed insulation is typically installed in existing assemblies or in new assemblies after the roofing is installed so the materials are not left unprotected from rain or meltwater during construction.

Another moisture source, water vapor, is often considered but not as well understood. Through the winter months in cold and mixed climates the indoor air can provide a significant source of water vapor. Water vapor moves into and through the assembly by two mechanisms: vapor diffusion and airflow.  Methods to control vapor diffusion and air movement are well documented (Latta, 1973, Hutcheon, 1985, Quirouette, 1985, Straube, 2005) but rarely well executed.  Airflow is capable of transporting hundreds of times more moisture than vapor diffusion (Wilson, 1961); hence it is important to control airflow to prevent moisture problems and ensure the durability of the building enclosure.

Many contractors and cellulose sales people falsely believe that dense-pack assemblies are ‘airtight’ and immune to air leakage-related moisture problems. This has been shown not to be the case (Derome 2005, Schumacher 2010) – with disastrous consequences in cold and mixed climates where roof rafters have been ‘dense-packed’ with no measures to minimize moisture accumulation or to promote drying. Approximately two (2) assemblies in ten (10) fail – typically within 10 years (Fitzgerald 2010).

Unfortunately there is little consensus on the incidence of and physics behind moisture problems in dense-packed roof assemblies and, as a result, there is little guidance on measures to avoid these problems.  This document seeks to fill that gap.

WUFI Pro 5.1 is one of the most advanced commercially available hygrothermal simulation programs in use today. It is used by many in the construction industry in North America, Europe, Asia and other parts of the world. The accuracy of WUFI accuracy has been verified (by the Fraunhofer Institut Bauphysik in Holzkirchen, Germany – www.wufi.de) against numerous full-scale field studies of enclosure performance (roofs, walls, foundations, parking garage decks, etc.) over the past 15 years.

WUFI Pro 5.1 was used to prepare demonstrative hygrothermal simulations to facilitate an explanation and comparison of the hygrothermal performance observed through forensic work, laboratory testing and field research. The varied field experience and lack of consensus on moisture problems is explained. Finally, the document presents and compares four real world strategies to avoid moisture problems in dense-packed roof assemblies.

Theory suggests that colder roof surface temperatures should result in more moisture problems in dense-packed roof assemblies.  This is influenced by a number of factors: there can be a higher rate of vapor diffusion (due to higher vapor pressure differences); there is a greater potential for air leakage condensation (due to colder condensing surface temperatures); and higher roof sheathing equilibrium moisture contents (due to colder temperatures and higher RH at the sheathing).  Field experience confirms that dense-packed roof assemblies in northern climates experience more problems than those in southern climates.

For the purposes of our demonstrative hygrothermal simulations we have chosen to use the WUFI climate data for the city of Chicago. Metropolitan Chicago is the third largest city in the United States; it has a significant population (almost 9.5 million as of the 2010 U.S. census) and housing stock (approximately 3.4 million housing units as of the 2010 census); the city is located in a cold climate (DOE Zone 5) and the results of the simulations are expected to be relevant for many other large, Zone 5 urban centers including Detroit, Boston, Denver, Pittsburgh, Albany, Indianapolis (EERE, 2010).

Figure 1. Temperature and RH for the climate of Chicago

Building enclosure performance is often strongly connected to indoor conditions. Hygrothermal simulations were prepared to demonstrate the impact of various wintertime indoor relative humidity levels. Figure 2 shows the indoor temperature and RH assumed for the demonstrative hygrothermal simulations. The indoor temperature was assumed to vary between 20 °C (68 °F) in the winter and 24 °C (75.2 °F) in the summer. Three levels of indoor moisture are considered: ‘low’ (20% RH in winter), ‘normal’ (30% RH in winter) and ‘high’ (40% RH in winter). For reasons that will become obvious, the simulations did not consider ‘very high’ wintertime humidity (e.g. 50% RH) although some homeowners do maintain their houses at these often- problematic levels.  In all cases the summertime RH was assumed to peak at 60%.

Many wrongly believe that lower wintertime indoor humidity levels result in comfort problems including dry skin, eyes, etc. however, authoritative references now recognize that, at temperatures below 25 °C (77 °F), there is little connection between humidity and human comfort (ASHRAE HOF 2009).

It is not uncommon for older and / or leaky houses in cold climates to have very low wintertime indoor humidity levels (e.g. 10-20% RH); however, humidity levels can increase (e.g. to 40-50% RH) when airsealing measures result in extreme reductions in air leakage (e.g. to 2 ACH50 and lower). High indoor humidity levels (especially in materials) are related to dust mites, mold (often as a result of surface condensation) and other human health concerns (ASHRAE HOF 2009).

Figure 4 shows the most common insulation retrofit solution for a roof assembly that did not have any existing insulation (e.g. typical of many houses constructed before the 1960s). Fiberglass batt insulation is used to plug the opening at the bottom of the framing cavity. Insulation is installed from the outside (through the soffit) or install holes are drilled through the existing ceiling finish. An insertion tube technique is used to dense-pack the cavity space with loose-fill insulation (e.g. cellulose or glass fiber). The soffit is replaced and any install holes are plugged and the ceiling finish is repaired. Wall and floor cavities are typically retrofitted with dense-packed insulation at the same time.

WARNING: This approach is not recommended due to potential for moisture accumulation in and deterioration of the roof sheathing & framing! 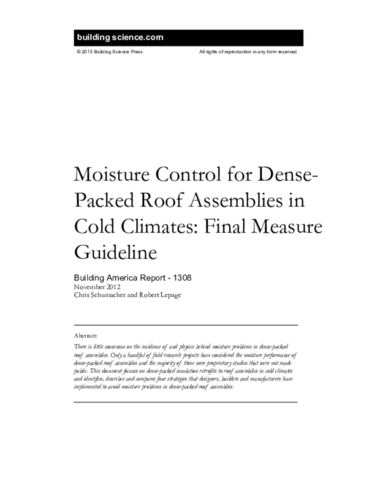