The combination of tankless hot water heating and solar hot water heating creates some challenges that we have been researching with our builder partner, Coastal Habitats/Coastal Green Building Solutions, Hilton Head Island, SC. Sending solar preheated water into a tankless water heater can cause wide temperature fluctuations at the domestic taps. The purpose of this research project is to design and install a solar hot water system that features a tankless water heater integrated with a solar hot water panel such that consistent temperature control can be achieved at the domestic taps. This report is an excerpt from the 2008 Building Science Corporation Industry Team Building America Annual Report.

Short-term testing confirmed that the solar/tankless hot water heating system, without the small storage tank and circulator modifications suggested by BSC, would not reliably provide the expected hot water temperature to the domestic taps at low flow rates. Addition of the small storage tank successfully resulted in hot water reaching the taps at very low flow rates, and when the water temperature supplied to the tankless heater from the solar collector was elevated but still less than 130oF. However, other unexpected temperature instability issues with the prototype design were observed and we are continuing to work toward the best resolution.

At a different test house, water quality issues, causing too frequent clogging of the tankless hot water heater inlet filter and mineral scaling of pipe fittings, were found to be the only problems in a prototype tankless/combination space and domestic hot water heating system. Electronic water conditioning and pre-filtering are solutions that were investigated and seem to be working well.

This project meets the Gate 1B “must meet” requirement for performance-based and
safety, health and building code requirements for new homes. The solar hot water/tankless water heater integrated installation will be fully compliant with all
relevant performance-based codes.

This project meets the Gate 1B “should meet” requirement for prescriptive-based safety, health and building code requirements for new homes. The solar hot water/tankless water heater integrated installation will be fully compliant with all relevant prescriptivebased codes.

This integrated product should meet the Gate 1B “should meet” requirement to meet reliability, durability, ease of operation and net added value requirements for use in new homes. Sensitivity to water quality resulting in too frequent clogging of the tankless heater inlet filter, and scaling inside pipe fittings, presents some reliability concerns that would be common to similar systems with or without the prototype modifications of a small storage tank and circulator.

BSC has discussed these system issues with technical staff at a major tankless water heater manufacturer (Rinnai America Corp.). They were more willing to discuss the water quality issues than the solar integration or the combination space and domestic hot water system integration (they said we were on our own with those systems). BSC will continue to conduct more research on this advanced subsystem in partnership with our builder partner and NREL before approaching a manufacturer about collaboration toward wider market solutions.

Outstanding issues that our research aims to more fully determine include: 1) prototype system performance and occupant acceptance regarding temperature stability at the domestic water taps over a year of occupied monitoring; 2) the frequency of temperature instability at the taps if the small storage tank and circulator modifications were not used; and 3) annual energy, water, and cost savings.

BSC was successful in creating a prototype water heating system that merged an Integral Collector Storage (ICS) solar hot water heater with a tankless water heater plus small storage tank and circulator. The system achieved the goal of providing temperature control at the domestic taps regardless of very low flow, frequent on/off flow, or solar pre-heated water supply. The system is expected to provide energy savings, water savings, and increased temperature control at the domestic taps. An important but easy to implement improvement was already made. Another proposed improvement is scheduled to be implemented and retested. Long-term monitoring under normal
operating conditions will begin once the house is sold and occupied.

The combination of tankless hot water heating and solar hot water heating creates some challenges that we have been researching with our builder partner, Coastal Habitats/Coastal Green Building Solutions, Hilton Head Island, SC. Sending solar pre-heated water into a tankless water heater can cause wide temperature fluctuations at the domestic taps. All gas-fired tankless hot water heaters have a minimum firing rate_usually not less than 15 kBtu/h. If the entering water temperature is too close to the outlet temperature setpoint, then the unit may not fire, causing wide temperature fluctuations at the domestic taps. One major manufacturer recommends that the water going into the unit be no warmer than 75°F because 15 kBtu/h will give a 50°F temperature rise at 0.5 gpm (the lowest flow rate to activate the heater) and 75+50=125, which is the highest recommended domestic hot water temperature.

Referring to Figure 5.1, at the minimum hot water draw rate of 0.5 gpm, the minimum firing rate will produce a 50oF temperature rise. That means that if the water heater outlet set-point is 125°F, and the inlet water temperature is greater than 75°F, then the water heater will shut off, delivering water to the tap as low as 75°F. If the flow rate increases, or if the inlet water temperature falls, then the heater will fire again and start delivering 125°F water to the tap. Referring again to Figure 5.1, depending on the water flow rate (between the minimum and maximum allowed by the unit) this type of temperature fluctuation can occur with solar preheated water anywhere between 75°F (at 0.5 gpm) and 121°F (at 8.5 gpm). It is very likely that the solar preheated water will quite often fall within that range.

Tankless water heaters can cause annoying temperature fluctuations at the taps for other reasons as well:

The system of Figure 5.8 adds a small, well-insulated storage tank that is backed up with electric heat to a setpoint approximately 10°F below the tankless hot water heater outlet setpoint. In that way, the temperature fluctuation delivery problem should be resolved for conditions when:

The mixing valve shown in Figure 5.8 and Figure 5.9 is required for when the solar pre-heated water is too hot for delivery to the domestic taps, and when the storage tank temperature needs to be high for space heating applications.

The system of Figure 5.9 goes further than the system of Figure 5.8 by eliminating the short-cycling inefficiency of the gas heater and by eliminating the need for any electric heating. The system adds a pumped circulation loop from the side of the small, well-insulated storage tank to the tankless water heater, much like a typical boiler plus indirect water heater system. Whenever the thermostat switch on the storage tank closes, the circulator will be energized, moving water through the gas heater. Tankless hot water heaters have a relatively high flow resistance; the pump needed to force water through the unit will draw about 90 W—not an insignificant amount of pump energy. Therefore, while this system will provide the best operation in terms of supplying regulated temperature water to the taps, and it does not require an electric heating element, there will be circulator energy and storage tank losses that need to be better understood.

The system of Figure 5.9 also has the advantage of being easily adapted to combination space and domestic hot water heating applications as shown in Figure 5.2 In that configuration, the storage tank needs to have 2 additional side ports available for the pumped loop to the hot water coil in the space heating process air stream. Small, 12 gallon tanks of with 4 side ports and 2 top ports are readily available (such as Whirlpool md# E1F12US015V made by US Craftmaster, sold at Lowe’s for about $210).

NREL researchers later installed the data monitoring system and conducted short-term tests, according to the test plan as described in Appendix A. Observations from the short-term testing were as follows:

To resolve these temperature instability issues, BSC is working with the builder to replace the residential unit with the same size commercial unit which can be set for a higher outlet . . . 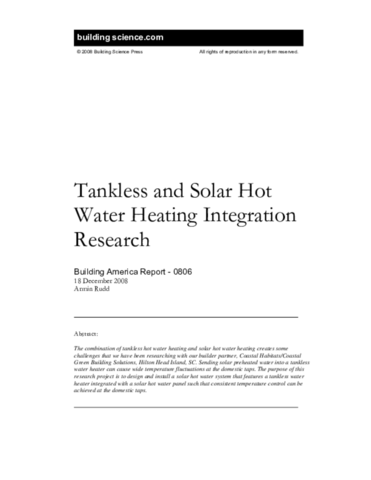