BSI-034: Arrhenius and the Mayor—Dezincification

Our story starts with a self-important politician taking a shower in a new home in Las Vegas in the mid 1990’s and ends with ten’s of thousands of houses with leaks and litigation. Our story will take a detour to the Great War and one of the most famous naval engagements of all time that almost didn’t take place and an under appreciated and much maligned national hero. Along the way we will get re-acquainted with one of the greatest minds of all time – so great that both the physicists and chemists claim him as one of their own.

A woman, Jan Laverty Jones, buys a new house in Las Vegas and is incensed that it takes five minutes for hot water to get to her shower. She becomes furious when the builder says that he is not responsible and that’s the way that it is. Unlike most new homeowners with a grudge she happens to be the Mayor (Photograph 1). In a move that would make Boris Yeltsin proud she issues a decree requiring all new houses constructed henceforth to have hot water recirculation systems. OK, it wasn’t a decree, it was a bylaw change, but you get the idea. Never mind the energy implications of this decision as this was the 1990’s and who cared about energy way back then? The implications of this decision are now haunting homeowners who bought new houses since then as well as the homebuilders who constructed them. 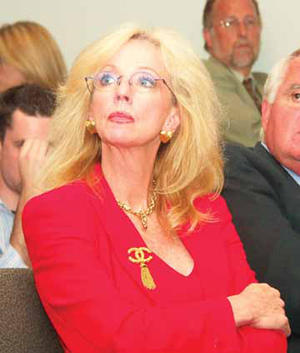 Photograph 1: Jan Laverty Jones—Mayor of Las Vegas from 1991 to 1999. The photo speaks for itself. Photo courtesy of the Berkeley Daily Planet.

What is the big deal about hot water recirculation systems? They have been around a long time. We know how they work. We know about the energy penalties. Well, Las Vegas is different, as we all know. But the difference I am referring to is the water, not the other stuff. The water in Las Vegas when coupled with hot water recirculation systems and the type of plumbing system then becoming common in the homebuilding industry makes for an interesting study of physics, chemistry and unintended consequences.

Las Vegas has lots of sulfates and carbonates and a high pH in its water, along with lots of chlorides and lots of fluoridates. The sulfates and carbonates and high pH come from nature, the chlorides and fluoridates come courtesy of the Las Vegas water department. And for reasons not well-understood Las Vegas water also has lots of dissolved oxygen, and I mean lots of dissolved oxygen.

None of this is a surprise to folks who know and love water. It does not seem to be a problem with the folks living there in large numbers since gangster Bugsy Siegel kicked Las Vegas into the big time in the late 1940’s. But it has been and continues to be a huge problem with hot water heaters. Hot water heaters in Las Vegas fail faster than almost anywhere else – in many cases in 3-to-5 years.

The hot water heaters fail from the precipitation of those pesky carbonates in the water. Now, lots of places also have lots of carbonates, but not lots of dissolved oxygen, and not lots of other neat stuff in the water like Las Vegas. The precipitation of the carbonates is much faster in Las Vegas hot water heaters than elsewhere. This results in one of those unintended consequences that leave your head spinning. The water heaters are in essence pretty effective water-purifying systems taking dissolved minerals out of the water. The minerals of interest to us happen to be calcium and magnesium. Remember this for later.

Homebuilders, in their continuing efforts to reduce their costs and improve their production efficiencies, began to replace traditional copper based piping systems with cross-linked polyethylene (PEX) water supply piping. PEX has a lot going for it. It does not corrode, is chlorine-resistant, it does not develop pinhole leaks, has fewer fittings, connections and elbows. Did I mention the part about the fewer fittings, connections and elbows? Homebuilders began to use PEX systems almost everywhere – including Las Vegas.

With PEX systems the fittings and couplings are almost all universally brass. Brass, a metallurgists dream, a magnificent alloy of copper and zinc. But to the British Grand Fleet and its commander John Rushworth Jellicoe (Photograph 2), admiral, hero of the British Empire, a nightmare.

British Dreadnoughts (Photograph 3) used 70/30 brass tubes in their condensers. These brass tubes, 70 percent copper, 30 percent zinc, suffered from “dezincification” a process where the zinc is preferentially removed by corrosion. Zinc is a highly reactive metal with a weak atomic bond. The process is referred to by old sea dogs as “Condenseritis.” Dezincification had more effect than German U-boats (Photograph 4) and the Imperial German Navy’s High Seas Fleet in putting British ships out of action in the First World War. 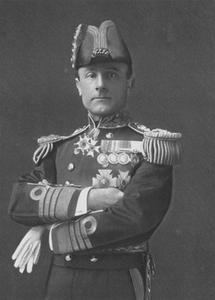 Photograph 2: Sir John Rushworth Jellicoe—British Grand Fleet Commander admiral, hero of the British Empire. Trashed by his subordinate, Vice-Admiral Sir David Beatty, whose poor tactics resulted severe losses to his own battlecruiser squadron. Jellicoe was maligned by the press at the time for not destroying the German fleet. In a bitter irony, Jellicoe was more respected by his adversaries than his own nation, Germany sent a contingent to his funeral, but pointedly did not provide a similar honor at Beatty’s funeral. In a final twist to the saga, Beatty caught pneumonia at Jellicoe’s funeral and died shortly afterward. Photo courtesy of “The Great World War: A History,” edited by Frank A. Mumby (Gresham Publishing Company, five volumes 1915-1917). 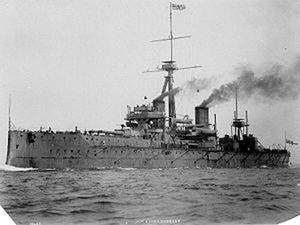 Photograph 3: HMS Dreadnought—British Battleship. The Dreadnought so revolutionized naval power that an entire class of battleships was named after her. Photo courtesy U.S. Naval Historical Center. 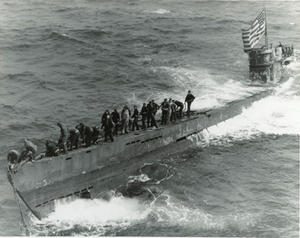 Because of condenseritis Admiral Jellicoe almost didn’t steam out of Scapa Flow to meet Vice-Admiral Scheer and their respective destinies at arguably the largest naval battle in history – the Battle of Jutland – the greatest clash of big-gun armored warships ever.

So what to do? Well, take the zinc out of the brass. You of course can’t take it all out because then we wouldn’t have brass anymore – we would have copper. Why not just use copper? Copper is not as strong as brass. The good news is that it turns out that we have different types of brass. The most common type is “yellow brass” which is 35 percent zinc – and is the problem child. Remember: yellow bad. Another type of brass is “red brass” which is less than 15 percent zinc. The red brass seems to work. Remember: red good.

British metallurgists eventually solved the problem with the addition of arsenic resulting in “admiralty brass”(1). And that was pretty much it on the brass side for about a half a century.

This leads us to Svante Arrhenius (Photograph 6). Heat is needed for most chemical reactions to occur. Arrhenius gave us the quantitative relationship that governs these reactions. This is a pretty big deal. Activation energy is his baby. Maxwell-Boltzmann distributions, Gibbs free energy, Plank’s constant all are intertwined with the Arrhenius Equation. Engineers, being engineers simplify the famous equation: for most chemical reactions the rate doubles for every 10 degree Kelvin rise in temperature. Guess what recirculation systems do? They make the hot water side of the piping systems hot all the time. Guess what this does to the rate of dezincification? Svante Arrhenius meet Jan Laverty Jones. 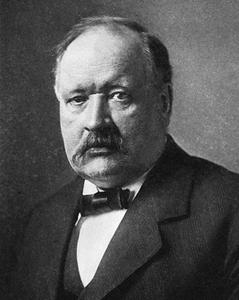 Photograph 6: Svante Arrhenius—The boy from Vik, Sweden, writes a doctoral dissertation that gets the thumbs down treatment from the establishment types at the Physical Institute of the Swedish Academy of Sciences. He has the last laugh though when the work gets him the Nobel Prize in Chemistry in 1903. He still gets no respect today. He is the father of the Greenhouse effect – not Al Gore. Arrhenius said this over a hundred years ago: “If the quantity of carbonic acid increases in geometric progression, the augmentation of the temperature will increase in nearly arithmetic progression.”

Most of the new houses in Las Vegas with PEX piping are undergoing repairs and the associated litigation is a nightmare for everyone. In new Las Vegas homes the damage never appears on the cold side. Arrhenius again.

Las Vegas, being Las Vegas gives us some interesting twists. Remember earlier when I mentioned calcium and magnesium? These minerals typically form scale on brass fittings protecting them from dezincification. Guess what? The water heaters take them out of the water accelerating the process. Even more interesting, the elevated pH of Las Vegas water keeps the zinc oxide corrosion product at the fittings blocking the water flow. So the meringue doesn’t get flushed out of the system.

So what to do? Well, take the zinc out of the brass. You of course can’t take it all out because then we wouldn’t have brass anymore – we would have copper. Why not just use copper? Copper is not as strong as brass. The good news is that it turns out that we have different types of brass. The most common type is “yellow brass” which is 35 percent zinc – and is the problem child. Remember: yellow bad. Another type of brass is “red brass” which is less than 15 percent zinc. The red brass seems to work. Remember: red good.

What else can you do? Well, you can move to Phoenix. Why? Well, by the time you get downstream on the Colorado River most of the problem disappears. So once again, pretty much what happens in Vegas stays in Vegas.

So is this the Mayor’s fault? Interesting question. You can get recirculation systems to work with the right stuff even with bad water. But as they say in this business – who knew? 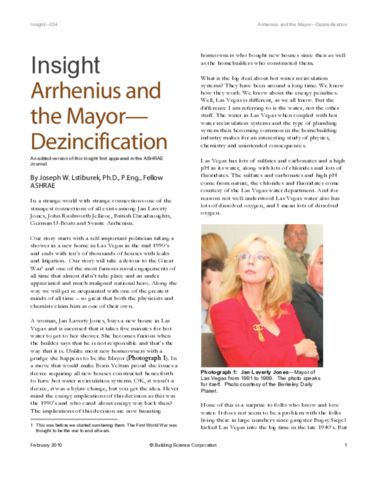