This report describes the construction and instrumentation of Phase IV of a multi-phase, multi-year research project at the Vancouver Field Exposure Test Facility in Coquitlam, British Columbia. The main objective of Phase IV is to determine how various configurations of exterior low vapor permeance insulation affect the moisture durability risk of structural wood-based sheathing. To assist with this analysis, the walls will be subjected to elevated interior relative humidities, and intentional controlled surface wetting of the interior and/or exterior of the OSB sheathing.

This multi-phase, multi-year research project at the Vancouver Field Exposure Test Facility in Coquitlam, British Columbia is led by Building Science Corporation (BSC) and Gauvin 2000 Construction Ltd. The objective of the initial test program was to determine the performance of historical, current and possible future wall assembly configurations under field conditions. Phase I and II of the project focused on the role of specific assembly layers. Interior relative humidity conditions were varied, and controlled wetting was used to simulate leaks on the interior face of the sheathing. During Phase III, the focus was on the durability of the wall systems when subjected to exterior wetting. Wetting apparatuses were used on both the interior and the exterior of the sheathing in each assembly, in order to simulate different types of leaks1.

This report describes the construction and instrumentation of Phase IV of the project, which started September 21, 2012. Phase IV will demonstrate the performance of various exterior insulated residential wall assemblies in a high stress moisture environment that is typical of the Pacific Northwest climate (DOE climate zone 4C). The main research goal is to examine the performance of the various walls under the influence of intentional exterior wetting events in the drainage space. As part of this multi-year test program, walls were subjected to normal interior and exterior stresses during the first winter. Following the first winter, walls will be subjected to intentional wetting events to the surface of the OSB sheathing, both on the interior and exterior. The expected final deliverable will be a research report prepared at the conclusion of the Phase IV testing in the spring of 2014.

The Vancouver Field Exposure Test Facility was constructed in the fall of 2005, in Coquitlam, British Columbia (see Figure 1). The facility permits the side-by-side construction and comparison of seven 38 ½ ”x 96” (0.98m x 2.4m) test wall panels on each cardinal orientation, for a total of 28 wall test panels, and three 12’ x 24’ (3.6m x 7.2m) roof panels on the North and South orientations, for a total of six roof test panels. All of the test panels are exposed to the same indoor conditions. The test facility was constructed on the roof of a low-rise office building that is owned by Gauvin 2000 Construction Ltd. (a British Columbia builder who is a co-sponsor of this research project). This eliminated the need to buy or rent a large empty site (with free wind approach) in the expensive real estate market of greater Vancouver. The location also affords the test facility some protection from potential vandalism. Figure 2 shows the location of the test facility relative to other buildings. Figure 3 and Figure 4 provide elevation drawings showing the facility’s basic components. A steel mast on the roof of the test facility supports a weather station at a height of 22 ft (6.7 m) above the roof of the office building and 50 ft (15.24 m) above ground level. The monitoring system continuously collects weather data, including: temperature, relative humidity, wind speed and direction, rain, and solar energy.

An eavestrough (or gutter) was installed on all four orientations of the hut following the first year of analysis in Phase I as it was determined that there was significantly more water draining off of the roof onto the walls on the South orientation and the North orientation than on the East and the West orientations. By installing the eavestrough, the amount of water on the wall was only a result of the driving rain, and not run- off from the roof. Figure 5: Weather station on the roof of the Coquitlam Test Hut

This is the fourth phase of testing at the Vancouver Field Exposure Test Facility. The Phase III walls were deconstructed and removed to ensure that the effects from the testing from Phase III would not affect Phase IV testing and observations. The Phase IV walls were built and installed by Gauvin 2000 Construction Ltd. and instrumented by BSC staff during the week of September 18th, 2012. Data acquisition commenced September 21st, 2012. There were no tests conducted on the roof panels in Phase IV.

The main objective of Phase IV is to determine how various configurations of exterior low vapor permeance insulation affect the moisture durability risk of structural wood-based sheathing. To assist with this analysis, the walls will be exposed to intentional wetting events of a known volume at a known time, using a water-storage medium directly in contact with the interior or exterior of the sheathing. Figure 6 shows examples of the exterior wetting storage media. These media are connected to the interior conditioned space with a tube so that water can be injected after all components of the wall assembly are in place. Table 1 lists the test walls along with the materials used for Phase IV testing and analysis. The seven wall assemblies are repeated on all four orientations. All of the test walls are constructed of 2x6 wood framing, interior painted drywall, and exterior fiber cement siding. A brief explanation of each wall follows the summary in Table 1. . . 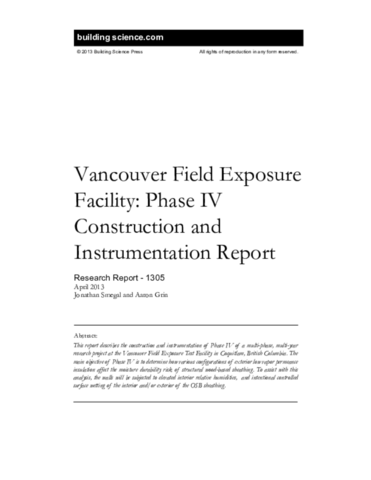