The optimum systems developed to date are dependent on the climate location. The systems fall into two categories:

The two categories essentially are the demarcation between regions where cold weather conditions occur with sufficient frequency and intensity that sufficient moisture accumulation from interior sources can occur on an uninsulated roof deck to risk mold, corrosion and decay problems.

The demarcation is specified as a distinction between regions where the monthly average temperature remains above 45 degrees F throughout the year and where it drops below 45 degrees F during the year. The criteria was selected for three reasons.

First, by keeping the roof deck above 45 degrees F, condensation can be minimized or eliminated. Condensation will not occur unless the dew point temperature of the interior air exceeds 45 degrees F and this air contacts the roof deck. This interior dew point temperature is approximately equal to an interior conditioned space temperature of 70 degrees F at an interior relative humidity of 45 percent. These are interior moisture conditions that can easily be avoided with air change/ventilation or the avoidance of over humidification during the coldest month of the year in the climate regions specified.

Second, a monthly average temperature was selected, rather than a design heating temperature, as it is more representative of building enclosure performance. Short term, intermittent "spikes" in parameters/ environmental loads are of interest to structural engineers and in the sizing of equipment, but are not typically relevant to moisture induced deterioration. Wood based roof sheathing typical to residential construction has sufficient hygric buffer capacity to absorb, redistribute and re-release significant quantities of condensed moisture should intermittent condensation occur during cold nights when the sheathing temperature occasionally dips below 45 degrees F. The average monthly conditions more accurately reflect moisture content in wood based assemblies. Control of condensing surface temperatures typically involves the installation of insulating sheathing above the roof deck. In residential wood frame construction this involves installing rigid insulation between the roof shingles and the roof plywood or OSB (Figure 2). The installation of the rigid insulation elevates the temperature of the roof deck to minimize condensation. Figure 3 and Figure 4 illustrate the differences between the two fundamental systems. Figure 7 shows a roof design that is not as dependant on controlling interior moisture levels as the other roof designs presented. The absence of cavity insulation yields the highest condensing surface temperature of any of the designs presented. In this particular design, the condensing surface is the air barrier membrane installed over the wood decking. With this design interior relative humidities should be kept below 60 percent in order to control surface mold. Also note that air sealing is critical in all unvented attic assemblies to prevent moisture problems associated with air leakage. Also, check out our "Vent on Venting". 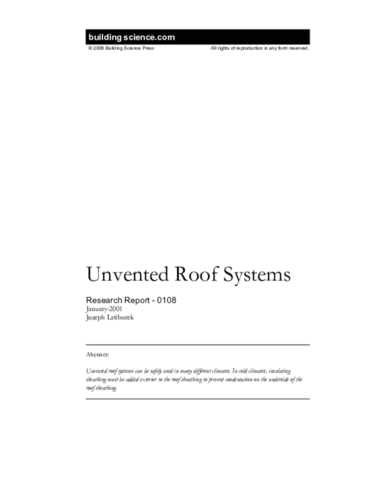