Most important, it was determined that small-scale differential scanning calorimetry can adequately predict (within 9%) the performance of PCM wallboard when installed in full-scale applications. This article was first published in ASHRAE Transactions, Vol. 99, part 2, pages 339-346.

In many parts of the country, electric power utilities are finding that they cannot meet the summer peak electrical demand of their customers. Florida utilities in particular are faced with high growth rates; nearly every new house has central air conditioning. For the largest power utility in Florida, the average peak-summer-day demand profile has nearly the sames hape as the demandp rofile of a residential air conditioner for the same time period. Figure 1 shows the utility load shape (Taylor 1990) and the measured average load profile of 58 residential central air conditioners (Paxon and Hinchcliffe 1980) in percent of load. The summertime peak generation load is between the hours of noon and 9 p.m. Most of the load comes from cooling equipment in buildings, and shifting much of it to off-peak periods would be advantageous. A building integrated and distributed thermal storage material such as PCM wallboard could shift most of the load coming from residential air conditioners from peak to off-peak time periods (Neeper 1990). As a result, capital investment in peak power generation equipment could be greatly reduced for some power utilities. These capital cost savings could be reflected in less expensive service to customers. Where power utilities are offering time-of-day rates, building-integrated thermal storage would enable customers to take advantage of lower utility rates during off-peak hours. Building integrated thermal storage systems could also make conditions more favorable for the use of advanced solar cooling and heating technologies. Energy storage materials need to be specifically designed for each climate to get maximum utilization during the dominant season of comfort-conditioning energy use. For example, in a cooling-dominated climate, the summertime temperature in a house may be comfortable between 72°F (22.2°C) and 79°F (26.1°C), while in a heating-dominated climate, the wintertime indoor temperatures may range from 65°F (18.3°C) to 72°F (22.2°C). If a phase-change material is to be utilized efficiently, the melting/freezing range and the associated latent heat must be optimized.

Rather than develop a totally new wallboard product, this work focused on enhancing the thermal storage capacity of standard gypsum wallboard. The gypsum wallboard matrix makes an ideal supporting medium for the phase-change material since approximately 41% of the wallboard volume is air voids. Gypsum wallboard is commonly used in buildings throughout the nation and there is about 5,000 ft2 (465 m2) of gypsum wallboard directly coupled to the conditioned air in an average 1,500-ft2 (139-m2) house. For a base-case 1,500-ft2 (139-m2) house on an average day during the peak month of July in Miami, FL (Swami et al. 1989), the sensible cooling load between the on-peak hours of noon and 9 p.m. totals 87,976 Btu (92,797 kJ). Eighteen percent of that load could be stored by the standard gypsum wallboard if the room was allowed to cycle between 72°F (22.2°C) and 79°F (26.1°C). In order to defer all of the on-peak sensible load, 5.6 times the thermal storage potential of standard wallboard would be required.

Kamel et al. (1991) conducted an experimental study whereby thermal and moisture storage materials were placed in one of two side-by-side test rooms to demonstrate the effect of enthalpy storage on off-peak cooling in hot, humid climates. Thermal storage was added first by placing one-gallon water jugs on racks next to the walls. Moisture storage was added later by hanging panels of silica gel from the ceiling. The results demonstrated the need for moisture storage as well as thermal storage to maintain indoor comfort when using off-peak cooling.

Shapiro (1989a, 1989b) has shown several phase-change materials to be suitable for introduction into gypsum wallboard with possible thermal storage applications for the Florida climate. These materials were mixtures of methylesters, methyl palmitate, and methyl stearate and mixtures of short-chain acids and capric and lauric acid. Although these materials had relatively high latent heat capacity, the temperature ranges required to achieve that thermal storage did not fall sufficiently within the range of comfort for buildings in hot climates. Hence, more work needed to be done to identify and test more suitable materials.

Suggested by Chandra (1989) and confirmed by subsequent literature search, commercial coconut fatty acids had melting/freezing temperature ranges that were more suitable for our application than the previous materials tested by Shapiro. However, a lower latent heat was also expected due to a higher content of the unsaturated compounds of oleic and linoleic fatty acid.

A differential scanning calorimeter (DSC) is an instrument that measures the heat capacity of small samples of materials. The sample holders for these tests are roughly 0.25 in. (0.00635 m) in diameter and about the same dimension in height. For materials changing phase, the DSC gives the melting and freezing curves and the associated latent heats. The principle of operation is to keep temperature equilibrium between a test sample and a reference sample while the reference is being heated or cooled at a constant rate. The excess heat absorbed or emitted by the test sample is recorded as a function of time. Integration of these values gives an accurate measuremenotf the total heat of transition between two temperatures.

An apparatus was constructed to prepare the phasechange material (PCM) wallboard samples. This apparatus allowed 16 in. (.406 m) square pieces of gypsum wallboard to be immersed in a temperature-controlled bath of the PCM. The temperature of the PCM was held at 104°F (40°C) to ensure complete melting and to get quick penetration of the PCM in to the air voids of the gypsum matrix. The immersion time was varied from 0.5 minutes to 240 minutes to obtain a relationship between PCM loading and immersion time. The amount of loading was important in order to maximize the useful amount of thermal storage without allowing weeping of excess PCM from the wallboard. A PCM loading of 25 % by weight was chosen since tests showed that there was slight weeping of the PCM from the wallboard at higher loadings. This agreed with previous work by Shapiro et al. (1987), although they used slightly higher loadings with other organic rnaterials. To achieve the loading of 25% by weight, the 0.5 in. (0.0127 m) thick gypsum wallboard was immersed in the 104°F (40°C) PCM f2or 5 minutes. The resulting product used 0.439 lbpcm/ft (2.14 kgpcm/m2). The cost of the PCM was $0.78/1b ($1.72/kg) or $0.34/ft2 ($3.66/m2). Figure 2 gives a plot PCM loading by weight as a function of immersion time for the coconut fatty acid 625. Figure 2: Loading of wallboard with PCM as a function of immersion time

To test the PCM wallboard in the DSC, small portions were cut from the 16 in. (.406 m) square boards. The samples did not include any paper from the front or back of the wallboard. Testing verified that the paper held very little PCM and should not be considered in the sample. Many tests were conducted on each PCM wallboard sample to ensure good reproducibility of the results. To verify the initial screening results for the 625 PCM wallboard, four additional samples were taken from both the center and edge portions of the PCM wallboard. Each sample was cycled in the DSC three times to determinet he reproducibility of the test procedure and of the material response. . . 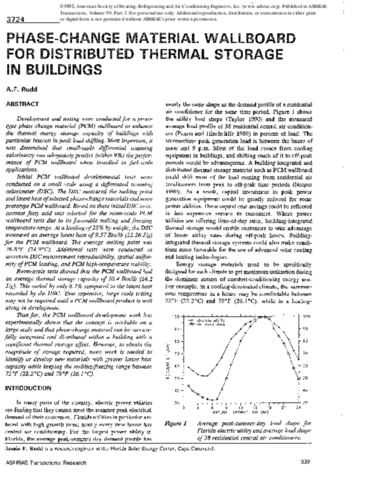