Little things can be big things. You build things that seem like they are obviously going to work and then the real world intrudes and reminds you that you are not as smart as you think. You then realize that the fine points turn out to be pretty important.

It’s pretty simple to build a compact unvented cathedral ceiling. Take a flat unvented compact roof and slope it (Figure 1). No big deal, right? Not quite. Sloping roofs can get you convection cells – and worse. It turns out to be important to have multiple layers of rigid insulation with the joints offset horizontally and vertically (staggered) and to have an air barrier directly on the structural deck (Figure 2). Ask me how I know?1 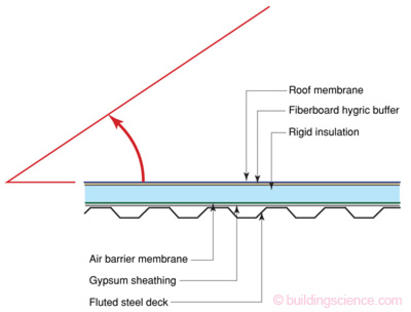 Figure 1: Slope an Unvented Compact Roof—This should be easy. 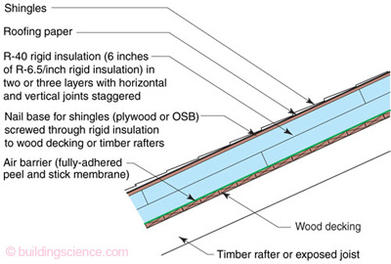 Figure 2: Sloping Unvented Compact Roof—It is important to have and air barrier directly on the top of the structural roof deck and to have multiple layers of rigid insulation with the joints offset horizontally and vertically. It is not a good idea to only have one layer of rigid insulation due to convection. 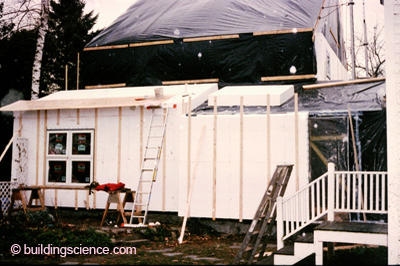 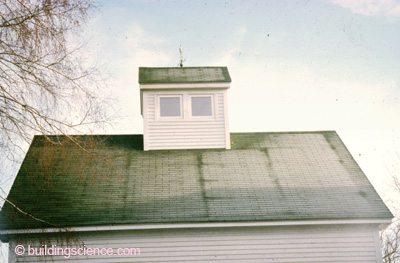 The convection loop in this example is not catastrophic because it is not coupled to the interior space – note the air barrier sheet membrane under the rigid insulation. Had the air barrier not been present the convection cells would have been coupled to the interior and there could have been moisture transport from the interior into the roof assembly. With moisture transport from the interior the roof would have likely been doomed as it is located in a cold climate. As it is, the convection only lead to professional embarrassment and an energy penalty. It turned out that the professional embarrassment was much worse than the energy penalty.

Let’s now add a bit more complexity and enjoy the outcome. Structural insulated panels (SIP’s) are a pretty elegant enclosure system – a foam core with exterior and interior linings of oriented stand board (OSB). The panels slip together to make walls and roofs – sometimes even floors and foundations. Easy, fast, no thermal bridges, it can’t get better than that. Let’s go to Juneau, Alaska and check a bunch of SIP roof assemblies (Photograph 3). The first sign that something was amiss were mushrooms growing out of the shingles – I call that the Wolfgang Puck effect (Photograph 4). Looking a little deeper (pun intended) we find moisture damage along the panel joints and the ridgeline (Photograph 5). 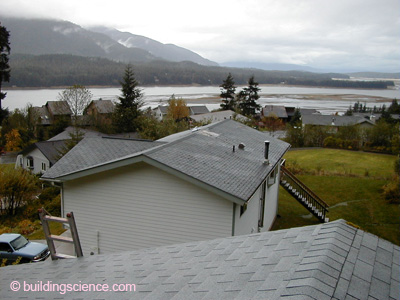 Photograph 3: SIP Roofs—Juneau, Alaska where rainfall is measured in feet not inches. 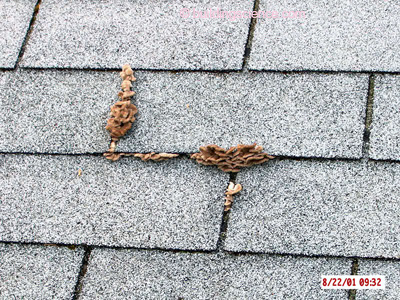 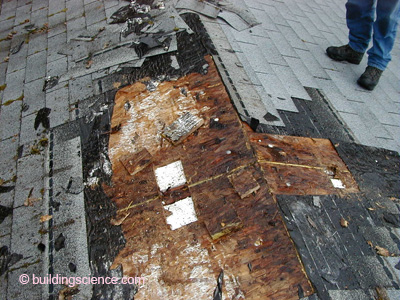 The pattern of damage is distinctive and can be found in many cold climate SIP roof failures. It is called “ridge rot” (Figure 3) and can easily be avoided by dealing with panel joints. It is a classic case of three-dimensional airflow networks and convection cells.

The upper and lower horizontal SIP splines have air gaps along their edges creating parallel “micro-ducts” (Photograph 6). The upper and lower pairs of micro ducts are connected at the panel joints (Figure 4). If the panel joints are not airtight at their interior surfaces interior moisture laden air can migrate into the interstitial joint cavities leading to the pattern of damage observed. 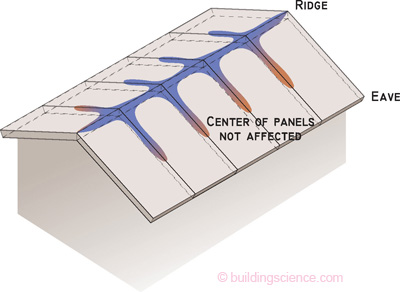 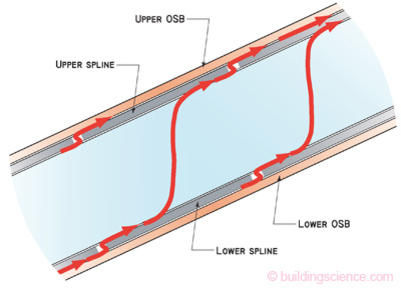 Figure 4: Airflow at Joints—Upper and lower splines are discontinuous, have gaps along their edges and are connected at panel joints. 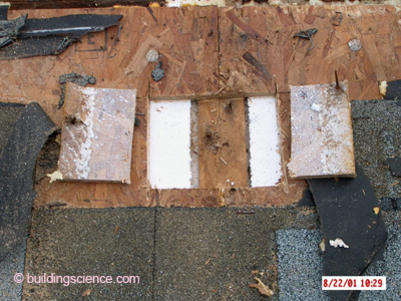 Note that the damage is all along the upper part of the roof – at the ridge – and at the upper portions of the panel joints near the ridge. The damage at the upper portions of the roof assembly is due to both thermal buoyancy and moisture buoyancy. The thermal buoyancy should be obvious – we sometimes refer to it as the stack effect. However, moisture buoyancy is not always obvious. Yes, moisture-laden air is less dense than dry air and tends to rise. It is one of those counter-intuitive but true things that amaze people in bars late at night. 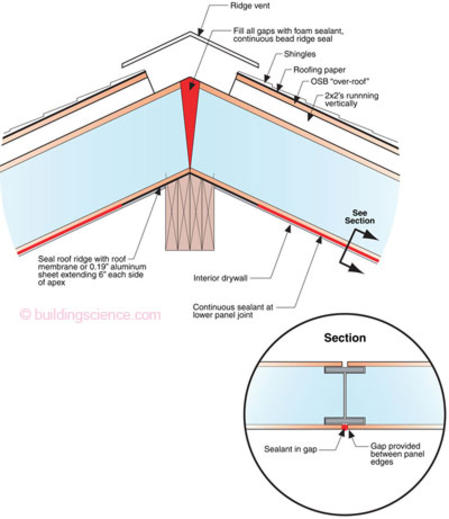 Figure 5: Avoiding SIP Roof Problems—Make the panel joints airtight especially over structural supports such as beams and purlins and provide a mechanism for moisture removal such as a vented over-roof.

Let’s have some more fun and look at what is becoming an increasingly common roof assembly failure with another type of roofing panel. And the intent is not to pick on panels. Let’s go to Lexington, Kentucky. Why, Lexington? Bourbon of course, and because the example we are going to look at happens to be in Lexington. 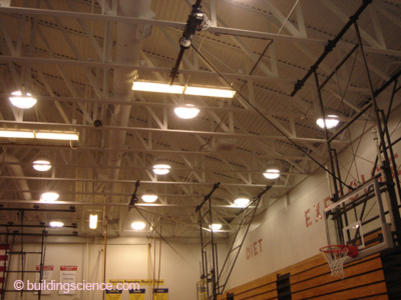 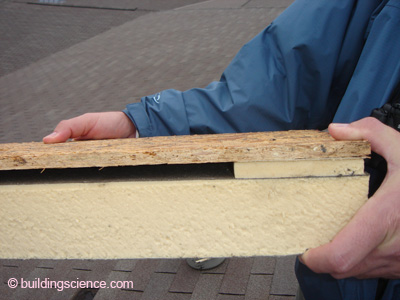 Photograph 8: Vented Foam Panel—The upper panel surface is OSB that acts as a nail base for shingle and other roofing systems. 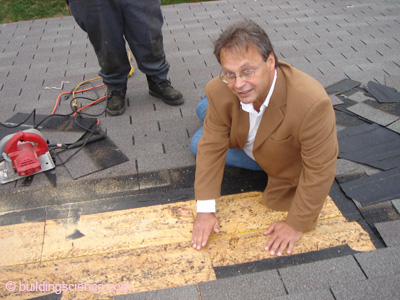 Photograph 9: Evaporative Thermal Biometric Airflow Sensing Device—A licked hand is very sensitive to small airflows. This building scientist is obviously having way too much fun, must be the bourbon. 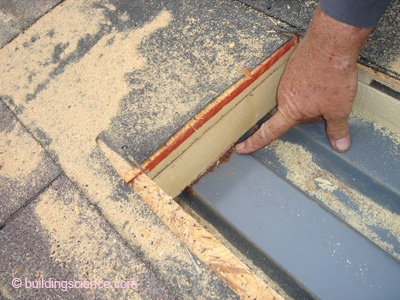 Photograph 10: Rust Stains—Note the evidence of moisture at the panel joints on the top surface of the fluted metal roof deck.

Once again, a complex three-dimensional airflow network has rudely interrupted the successful performance of a sloping compact roof (Figure 6). The situation is made worse because the fluted metal roof deck is an “acoustical” deck with perforations. When you are going to screw up an assembly you may as well go all out. 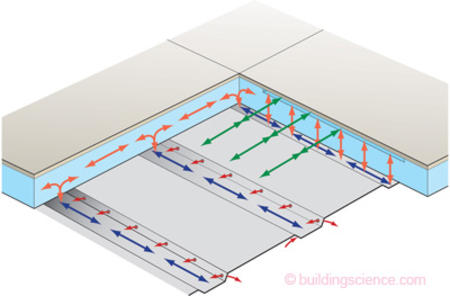 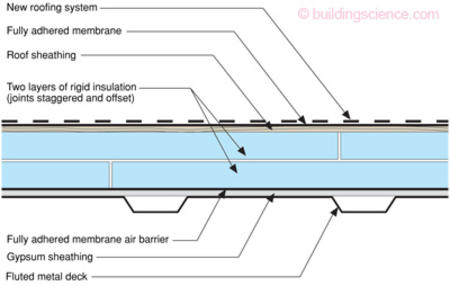 Air barriers, staggered layers of rigid insulation and sealed panel joints at interior panel perimeters are the tools in the building science toolbox that can be used to deal with complex three-dimensional airflow networks and convection. Simple, little things that turn out to be pretty big things. 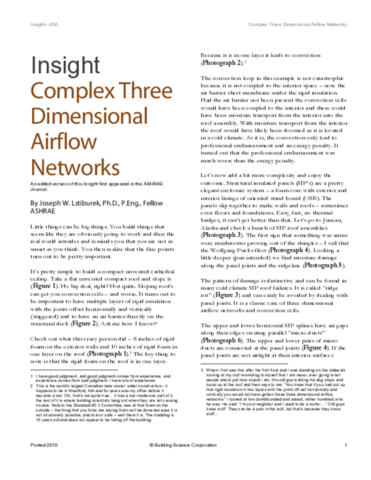