BSD-150: Black Stains on Carpets and Ghosting of Framing

This digest offers a detailed explanation of the causes of carpet discoloration, particulate deposits on surfaces and "ghosting" of wood stud members on the interior gypsum board surfaces of exterior walls.

We have investigated numerous units over the years that have been experiencing discoloration of carpeting due to particulate accumulation (see Photograph 1). In many unite we also observe particulate deposits on window blinds, inside of kitchen cabinets and on appliance surfaces (microwave ovens, CD players and refrigerators). Additionally we typically notice "ghosting" of wood stud members on the interior gypsum board surfaces of exterior walls. 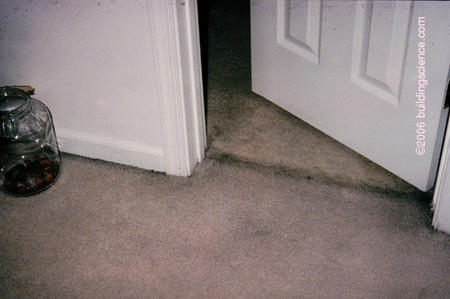 All of these mechanisms require really tiny particles - particles that can become aerosolized or lofted into the air and remain airborne for many minutes or hours. Big particles are not related to the problems observed. Big particles fall out of the air too fast - their movement and distribution is dominated by gravity rather than airflow, electrostatics or molecular movement such as Brownian motion.

The particle sources for the types of really tiny particles that can cause the problems observed are many:

Aside from really tiny dirt, concrete cutting and gypsum sanding most of these sources have something in common - something has to get burned, cooked, fried or pyrolyized in order to create the size of particles required. There are a few other potential sources of particles that could provide them in the size range necessary. However, we typically dismiss them as not likely for obvious reasons: particles from industrial grinding or cutting operations, fumes from welding and carbon black from copiers or laser printers. Of course it is possible that someone has unusual habits we don't know about or an unusual lifestyle that we don't notice. Just the same we don't typically notice any welding or industrial grinding going on inside the typical unit. We also don't often notice a Kinko's like business in most units. Ongoing renovations to interior gypsum surfaces do happen on occasion.

The oldest known deposition mechanism will be described first - Brownian motion. A long dead English botanist (yes, botanist not physicist), R. Brown, noticed tiny particles behave much like molecules with respect to vibration. Under the kinetic theory of gases, molecular vibrations are directly related to temperature. The higher the temperature the greater the molecular vibration. Brown observed that tiny particles in fluids get jostled or bounced around depending on temperature. The higher the temperature, the greater the jostling or movement of the tiny particles. He believed that the vibration of molecules in the fluid bounced the particles around. He was correct and became famous - hence the term Brownian motion. Okay, so far this is an interesting story, but how does this relate to our problem.

Well, air is a fluid and particles in air get jostled around based on the temperature of the air. When air with all of these bouncing particles brushes against the interior of an exterior wall it gets cooled. Not all of the air gets cooled, only the air right against the interior surface of the exterior wall. We call this layer of air the boundary layer. Now it gets a little complicated. Not all of the air in this boundary layer cools at the same rate. Some spots are colder than others. Where there is higher heat loss such as at a wood framing member, say a 2x4, the air in the boundary layer right at this spot is colder than the air in the boundary layer just inches away. Well, the air doesn't bounce around as much in these cold spots which means the tiny particles in the air at these cold spots also don't bounce around very much. If the particles are not bouncing around very energetically, it is easier for them to get stuck to the surface of the wall. The particles in the air next to the wall tend to "plate out" on colder surfaces. Since every stud is a "thermal bridge" the outlines of the studs can be sometimes seen due to the accumulation of tiny particles at the cold spots. This is often called ghosting and was very common in the old days, before MTV, even before Ozzie and Harriet. It was common back then because we typically had poorly insulated walls (real cold spots) and lots of people that smoked. The smokers supplied the particulates. The tobacco particulates plated out on the cold spots, usually at the studs due to Brownian motion.

Why doesn't this particular phenomenon happen as much today? Two reasons: our houses are better insulated and there are fewer smokers. Fewer people smoke inside and those that do typically accept the fact that smoking not only causes their house to smell but smoking also makes their house dirtier due to the tobacco particles plating out on cold surfaces. We point this out since many units we inspect contain heavy smokers and the problems in those units are usually due to tobacco particulates. Don't smoke inside and your white walls won't go brown, nor will your light colored carpets discolor - same for your blinds. You should accept the consequences when you live in an ashtray.

Another well-known deposition mechanism is electrostatic attraction. When tiny particulates become electrically charged they will become attracted to other electrically charged surfaces. The particulates can become charged due to many reasons. Friction and proximity to electrical and magnetic fields are some of the most common. Plastic surfaces and surfaces that contain electrical equipment also become easily charged. The particulate depositions observed on window blinds, inside of kitchen cabinets and on appliance surfaces (microwave ovens, CD players and refrigerators) are due to electrostatic attraction.

One of the recent health fads has been responsible for creating electrically charged particles - a home ionizer. Many individuals purchased ion machines for health reasons. Home ion machines tend to cause dirty walls as the ion machine causes the particles to become charged and plate out on surfaces. The air is clean, but your walls are not.

The last deposition mechanism, and the most common, is the filtering of particulates by carpeting. When air flows through a carpet the carpet acts like a filter and removes particles from the air that passes through it.

Most of the deposition typically observed is carpet filtration. The carpet filtration issue is one of the most common complaints we now get from homeowners. Why is this now such a big issue? Why didn't we have the problem before? We've had carpets for a long time and the air pressure differences are also not new. So what is different? Simple:

We are not about to argue against light colored carpets or argue against consumers with higher expectations. However, lets talk about the particulates.

In 1989 the sale of candles in the United State was less than $75 million per year (a guess on my part). Candle sales are now a multi-billion dollar industry (not a guess on my part). For example, Yankee Candle is one of the hottest stocks on the New York exchange.

In one of the units we recently investigated we counted over 30 candles. In another unit one owner refused to believe that a candle could be responsible for the observed damage even as we lit the candle and watched the candle smoke. She gave us the "who are you going to believe, your lying eyes or me" look. 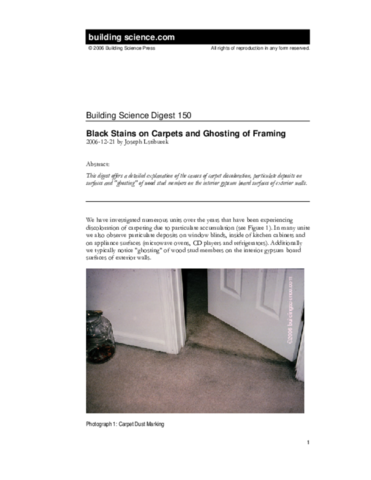