This overview summarizes double stud with spray foam wall construction including the advantages and disadvantages of this construction strategy. Complex two dimensional heat flow analysis and one dimensional hygrothermal modeling were used to determine moisture related durability risks for analysis. 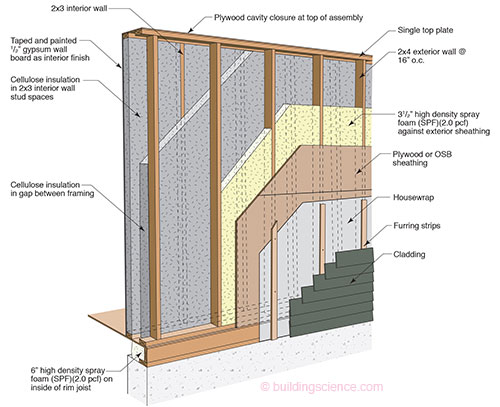 NOTE: Thickness of SPF will need to be increased in very cold climates to control temperature of condensing surface.

Whole-wall R-value: Using two-dimensional heat flow analysis with thermal bridging effects and average framing factors shows that adding an interior framed wall with a insulation filled gap greatly reduces the thermal breaks through the stud wall and can increase the clear wall R-value to R-38 depending on the thickness of insulation. However, because of the thermal losses at the rim joist, the whole-wall R-value is closer to R-35.

Air Leakage Control: Fiberglass batt, blown and sprayed cellulose are all air permeable materials allowing possible air paths between the interior and exterior as well as convective looping through the material. In this case, the spray foam is used as an air barrier in the stud space to limit the air movement between the interior and exterior so there are fewer energy losses due to air leakage. It is still possible and common to get air leakage below the bottom plate if it is not sealed.1 When spray foam is used in the wall system, it is beneficial to also use it in the rim joist that has a high potential for air leakage. Reducing the air leakage with spray foam may also increase occupancy comfort by reducing drafts.

Rain Control: Rain leakage into the enclosure is the leading cause of premature building enclosure failure. Rain control is typically addressed using a shingle lapped and/or taped water control layer such as building paper or a synthetic WRB (i.e. housewrap). Intersections, windows, doors and other penetrations must be drained and/or detailed to prevent the penetration of rainwater beyond the water control layer.2

Air Leakage Control: Since fibrous insulations are air permeable, air leakage condensation may occur if air moves into the stud space from the interior, or the exterior, depending on the climate. An air barrier is required in this wall system to ensure that air leakage is ideally eliminated, or at least minimized. Air leakage condensation is one of the greatest causes of premature building enclosure failure. An air barrier should be stiff, continuous, durable, strong, and impermeable.3

Air need not leak straight through an assembly to cause moisture problems; it can also leak from the inside, through the wall, and back to the inside. Condensation within the stud space is possible if this type of airflow occurs, depending on the weather conditions. Hence, wall designs should control airflow into the stud space.

Drying: Cellulose and fiberglass insulation allow drying easily, so drying is controlled by other enclosure components such as the high density spray foam and OSB sheathing. Installing a vapor barrier on both sides will seal any moisture into the stud space, resulting in low drying potential, and possibly resulting in moisture-related durability risks. Ventilation behind vapor impermeable claddings and interior components (e.g. kitchen cabinets) can encourage drying.

Built-in Moisture: Care should always be taken to build with dry materials where possible, and allow drying of wet materials before close in. Cellulose is often sprayed in damp, and manufacturers recommend drying before close in and moisture content limits. Interior vapor control may be required depending on the climate zone, and combination of vapor semi-impermeable foam and OSB, will increase the time required for adequate drying.

Durability Summary: The primary durability risks associated with these wall assemblies involve moisture damage related to rain water penetration or condensation (most likely the result of air leakage, but also potentially the result of vapor diffusion). In some extreme cold climates, two inches of spray foam may not be enough insulation to minimize the risk of air leakage and vapor condensation durability issues because of the ratio of insulation to the interior and exterior of the surface of the spray foam. Increasing the amount of spray foam (the amount of insulation exterior of the condensation plane) will further decrease the risk.

An airtight drywall construction approach will also reduce risks associated with air leakage condensation, and some form of vapor control may be needed (kraft paper or vapor barrier paint depending on climate).

A double stud wall requires more effort and time to construct properly compared to standard construction practices. The thickness of the wall requires plywood boxes to install all windows and doors in the enclosure. Installing spray foam reduces the risks from poor workmanship, but in some climates, more than two inches of high density spray foam may be required to completely avoid the risk of air leakage and vapor condensation. Double stud wall construction reduces the interior living space of the building by adding insulation to the interior of the structural frame wall.

There are increased costs in the addition of a secondary interior wall, and spray foam insulation. The benefits of reduced condensation potential may not be worth the cost of adding spray foam since there are only minimal benefits to the R-value of the wall assembly.

This is truly a high-R wall assembly, and with the addition of spray foam, there is a reduction in moisture related durability issues. In some extreme climates, 2” of spray foam may not be enough to sufficiently reduce the risk, which means that more spray foam is required, or some form of vapor control, likely a Class II vapor retarder would be sufficient. The other disadvantage to this wall system is that it reduces the living space of the building. 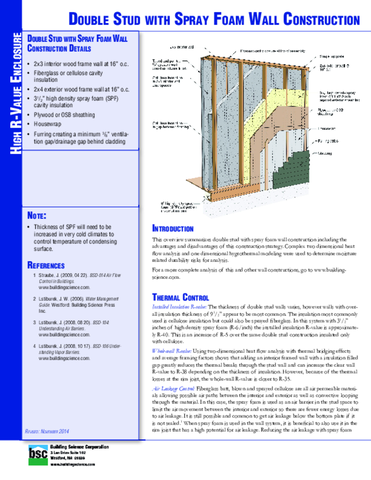