The difference between site and source energy is a vital concept to understand when looking at the energy performance of buildings—failing to account for the difference will result in an apples-to-oranges comparison that does not give the true picture of a building’s energy consumption. This document explains how these two types of energy are accounted for differently and why.

The difference between site and source energy is a vital concept to understand when looking at the energy performance of buildings—failing to account for the difference will result in an apples-to-oranges comparison that does not give the true picture of a building’s energy consumption. Failing to report which metric (site or source) is being used is a practice that should be eliminated, given how significant the difference can be. Numerous building programs, like Building America, EPA Energy Star, Architecture 2030, and the German Passiv Haus, all use source energy metrics.

A building’s energy consumption can be measured in terms of its fuel use: gallons of fuel oil, kWh of electricity, or therms of gas. Although all of them are in different units, you can ultimately measure them in terms of units of energy—e.g., “How much water can you boil with this energy?” For our purposes, energy is commonly measured in Btus (U.S. units) or kWh (metric units); for reference, the definition of a Btu, or British thermal unit, is the energy it takes to heat one pound of water by one degree Fahrenheit. Note that kWh, although it is typically used for electricity, is a unit of energy (not just electricity)—and can be applied to any fuel source.

If you add up all the energy (Btus) you are consuming at the meter, this is what is known as “site” energy. However, this is not the full picture. The problem is that the process of generating electricity incurs substantial losses—enough that for every unit of electricity at the plug, it might have been necessary to “burn” about 3 times that amount of energy (coal, gas, nuclear, etc.) at the power plant—see Figure 1. 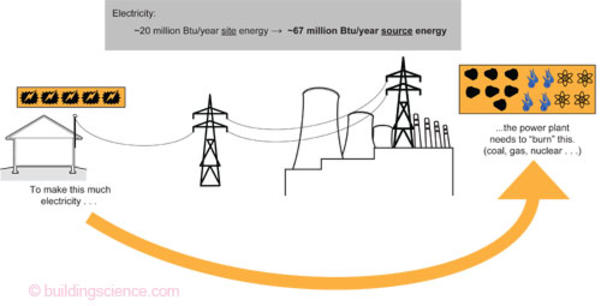 Although transmission losses are a part of this inefficiency, they are rather modest—roughly 10%. Transmission losses are what causes the hum of high-voltage electrical lines, and are the reason why the millions of transformers in the grid are air cooled. These losses can be reduced by better technology and will be reduced in the future by distributed power generation (i.e., the “Smart Grid”), especially if power is generated reasonably close to where it is used (e.g. in the same community for example).

In general, it can be said that “the grid” is “~30% efficient”: with the majority of the losses occurring at the plant. To be specific: the power plant cooling towers that are dumping steam (i.e., waste heat) into the sky are where most of that missing 2/3 is going.

If you account for the energy consumed at the power plant, this is known as “source energy” or “primary energy.” The EPA’s definition is:

Source energy is much more important than site energy if the concern is environmental performance. Site energy is useful because it can be unambiguously measured.

Converting to source energy has a major effect on electricity (factor of 3), and has a small effect for fossil fuels like natural gas. So what difference does this make? Here is an example:

So in terms of site energy, the electric tank has an efficiency level about 1.5 times better than that of gas tank. But if you factor in source energy: 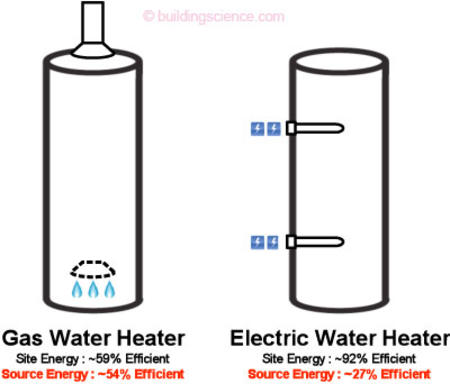 So the electric tank is half as efficient, in terms of source energy and, loosely, environmental impact. Obviously, if one doesn’t account for source vs. site differences, there are some pretty serious distortions when comparing electric heating with gas heating.

As another example: some argue that superinsulated buildings are so efficient (with heating loads so low) that using electric resistance heating is a reasonable solution, instead of installing a full heating system (e.g., using point-source electric resistance heaters instead of a furnace). Based on the conversions below, this is the equivalent to installing a ~30% efficiency furnace (compared to 80-95%+ AFUE gas furnaces commonly available), when source energy is accounted for.

A complete set of site-to-source conversions can be found in Deru & Torcellini (2007); these figures change from state to state, every day, or even hourly. This occurs because the power mix of the electric grid is constantly changing to meet load—for instance, peaking power (versus average or baseload) can have a significant effect. Also, as more and more renewable energy sources (wind, solar, etc.) are added to the grid, this “source energy penalty” will decrease. But some of the current United States national average figures are:

When people talk about electricity being “clean power,” this typically fails to acknowledge the reality of source energy. All that’s happened is that the pollution has been moved from your chimney to somewhere that you can’t see it—it hasn’t magically disappeared. In fact, with our current power mix, it is reasonable to argue that electricity is America’s dirtiest fuel. This does not mean electricity should not be used, only that it should be used wisely.

For calculating source energy from raw “billed” fuel units (kWh of electricity, therms of gas), see the conversion factors in Conversions for Calculating Your Source Energy Use (sidebar).

But overall, when people start throwing energy numbers at you, make sure that they first answer the question, ‘Are you talking about site or source?”

The Fuel Mix of the Grid 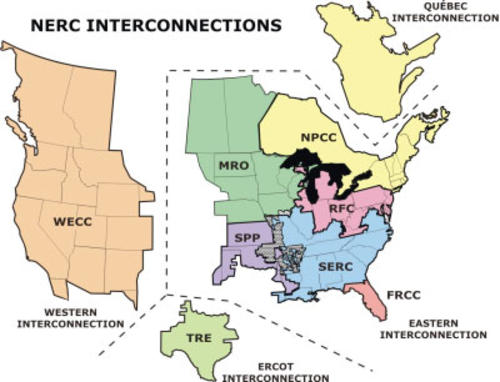 Based on the 2004 EIA data cited by Deru and Torcellini, the fuel mix for the US average and these three grids is shown below (Figure 4). It is clear that the US grid is largely powered by fossil fuels (71% on average), and 50% by highly polluting coal plants. In comparison, only 2% of the grid is powered by renewable energy, which includes renewable fuels, geothermal, wind, and solar (PV). 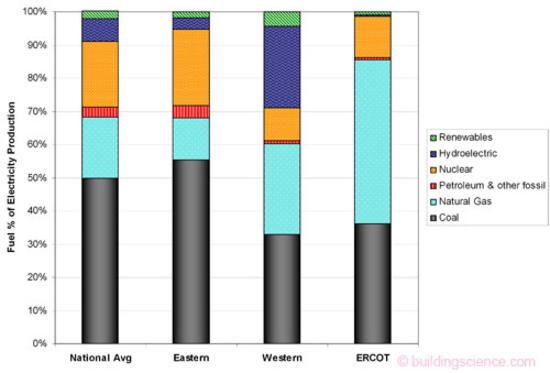 Figure 4: Electricity generation fuel mix for the continental United States (national) and three interconnections, for 2004 (EIA 2006) (via Deru and Torcellini 2007)

Of course, over time, the fraction of renewable energy is expected to increase, making the grid “greener.” With the retirement of old coal, the addition of wind, high efficiency gas, biomass, tidal, or even nuclear, the carbon intensity of producing electricity will drop, and the source-site ratio will drop. Perhaps the largest change will be as a result of millions of buildings feeding energy into the grid from PV arrays or co-generation facilities, since these have a source-site ratio of nearly one.

However, this optimism should be tempered by the fact that in our current market, generating electricity with fossil fuels is still one of the cheapest options. This was elegantly pointed out by Professor Nate Lewis of Caltech, in a 2007 interview with Paul Krugman (Krugman 2007):

“So building an emissions-free energy infrastructure is not like sending a man to the moon,” Lewis went on. “With the moon shot, money was no object — and all we had to do was get there. But today, we already have cheap energy from coal, gas and oil. So getting people to pay more to shift to clean fuels is like trying to get funding for NASA to build a spaceship to the moon — when Southwest Airlines already flies there and gives away free peanuts! I already have a cheap ride to the moon, and a ride is a ride. For most people, electricity is electricity, no matter how it is generated.”

Another factor to consider when looking at site-source energy conversions is not just energy or resource consumption, but also carbon emissions. Global warming potential is commonly measured in units of carbon dioxide equivalent (CDE, or CO2equivalent), expressed as mass (e.g., the average passenger vehicle produces 5.48 metric tons CO2equivalent per year).

Hence, providing heat by electric resistance heat releases 1.67/0.49 = 3.4 times as much greenhouse gases as heating with a perfectly efficient natural gas appliance. Top quality natural gas furnaces, and even some boilers, can achieve 95% efficiency, which changes the emission factors per unit of heat delivered to the building to 0.516 lbs CO2equivalent for each kWhequivalent (which changes the ratio to 3.2 instead of 3.4).

The 2005 Residential Energy Consumption Survey (RECS) notes that the 111 million households in the US consumed 1275 billion kWh over that year. If ten million homes had a 4 kWp array, each generating 4500 kWh/yr, then 4.5 billion kWh would be produced, or about 3.5% of total electrical energy consumption. However, this relatively modest impact in overall kWh consumption reduces source energy by 3.4 times as much, or 15.1 billion kWh. This is a rather significant impact, demonstrating the disproportionate effect of offsetting electricity use.

What about using energy costs instead?

Some (notably ASHRAE 90.1 and LEED) have considered using the cost of energy as a metric, instead of bothering with site-source conversions, Btus, kWh, etc. First, costs are commonly used in economic analyses, and are what many building owners care about the most. Second, energy costs are actually a rough surrogate for/approximation of source energy. This is part of the reason why ASHRAE Standard 90.1 (the energy efficiency standard for large buildings), uses cost in its “building energy cost method” (which calculates the effectiveness of various energy conservation measures) (Jarnagin, 2010).

Unfortunately, energy costs can vary greatly by geographic region, season, and even time of day. So if someone is trying to compare buildings A and B, energy cost can easily give you a distorted picture—or one that is only accurate for the next week or two. It is better to take the energy units, and then figure out the energy costs as necessary. This allows estimation (for instance) what would happen if energy costs change over time.

Energy costs are also somewhat meaningless across time and space: a high performance building in Europe may have the same energy cost as a mediocre building in Arizona, but use less than half as much energy and emit a third as much pollution. Similarly, it is difficult to assess the relative performance of a home reported to use “$60/month” in heating energy based on a 2004 magazine article. Without knowing how much energy costs, and what proportion was gas or electric, the dollars are meaningless. Reporting the source energy consumption would allow a comparison of buildings on different continents and at different times.

The difference between site and source energy must be accounted for when looking at the energy performance of buildings—failing to do so will result in an apples-to-oranges comparison that does not give the true picture of a building’s energy consumption. Electricity, as a fuel, requires roughly three times the energy input (“source”) to produce one unit of energy at the plug (“site). In addition, the electricity grid is primarily fed by fossil fuels (71% on average): with the current power mix, it is reasonable to argue that electricity is America’s dirtiest fuel. However, over time, the fraction of renewable energy is expected to increase, making the grid “greener.” 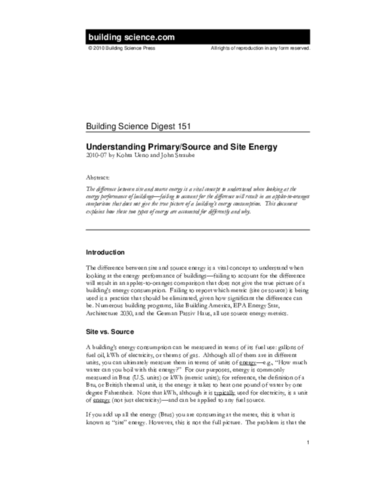