CP-1101: The Influence of Low-Permeance Vapor Barriers on Roof and Wall Performance

The modern scientific literature is rich with detailed accounts of vapor-diffusion physics. Unfortunately, many articles and documents still confuse the functions and requirements of air and vapor barriers, and the scientific understanding available has not been applied to codes, standards, manufacturers' guidelines, etc.

The goal of this paper is to show that the definition of vapor barriers/retarders used in codes and standards is arbitrary and not based on our current physical understanding of moisture movement in enclosure wall systems. It will also be demonstrated that the influence of vapor barriers on the hygrothermal performance of wall and roof systems is in fact a function of exterior climate, interior climate, solar absorptance, rainwater absorption, and the vapor and thermal resistance of all of the layers in the system. In many practical situations, a low-permeance vapor barrier will not improve hygrothermal performance and may in fact increase the likelihood of damaging condensation or trapping moisture in the system.

This paper will examine the role of vapor barriers on the moisture conditions within building enclosures through the use of simplified building physics. The phenomenon of summertime condensation, the drying of roofs and walls, and multiple vapor barrier layers will be explored. The importance of properly assessing both the interior and exterior climate will be discussed. Vapor diffusion control strategies will be presented.

To ensure durability, health, and in-service performance, the control of moisture is widely recognized as a critical part of the design and operation of building enclosures. The actual moisture conditions within an enclosure, and its materials at any given time, is a balance of its previous wetting and drying history.

Wetting primarily occurs by liquid absorption from rain and groundwater and condensation of water vapor transported into the enclosure by air movement (convection) and diffusion.

Field experience has shown that wetting inevitably occurs, especially from rain leaks through enclosure penetrations, built-in moisture, and intermittent air leakage. This reality has heightened the awareness that encouraging drying can be as important as resisting wetting.

Moisture storage within an enclosure is also critical to its moisture performance. Wetting can occur without problems provided that the moisture is subsequently removed and the safe storage capacity of the materials in the assembly is not exceeded. If an assembly allows a significant amount of safe storage, wetting and drying can occur at quite different times (e.g., different seasons). Many modern enclosures have little safe storage and, hence, must either limit wetting or have good drying potential at all times of the year. A traditional solid masonry wall with plaster on the interior can avoid exceeding its safe storage capacity even if it becomes wet in one season (e.g., winter) since it can dry in another (e.g., summer).

Modern enclosures attempt to completely control airflow and its related wetting (i.e., air barrier systems are provided). This means that airflow is eliminated as a means of both wetting and drying. Drainage aids drying by removing bulk liquid water—especially from parts of saturated or nonabsorptive materials—and can be a powerful mechanism. However, most damage mechanisms (e.g., corrosion, rot and mold, freeze-thaw) require much less moisture than the maximum that can be removed by drainage (Straube 1998). Hence, if moisture damage is to be avoided, additional drying is not only necessary—it is critical to good moisture performance. Since air leakage drying is eliminated, and drainage is insufficient, diffusion is the only other mechanism available for drying. For this reason, understanding diffusion is becoming increasingly important to the understanding of the performance of modern building enclosures.

Water vapor is always striving to move from high concentrations to lower concentrations, or from more to less. Vapor transport by this mechanism is called vapor diffusion. All materials exhibit some resistance to water vapor diffusion. The vapor permeability of a material is a measure of this characteristic. The permeability of steel is zero, while that of air is very high. In a building assembly that separates the interior from the exterior, there will usually be a difference in vapor content and, hence, a drive to force vapor through or within the enclosure. If the materials that make up the enclosure have low vapor permeability, the flow of vapor will be retarded. This means that the water vapor content will change as it moves through the system. If the permeability of the materials is high enough, or the difference in pressure large enough, vapor may reach saturation (100% RH) somewhere within the system and then condense on the next cold downstream surface. If the permeability or the driving force is low enough, the relative humidity may increase within the enclosure but condensation may not occur.

The most common North American definition of a vapor barrier is a material layer with a permeance of less than 1 U.S. perm or about 60 ng/Pa s m2. Although this definition appears in many codes, it has not been chosen based on the results of any thorough scientific study.

Despite the popular belief otherwise, neither the National Building Code of Canada (NBCC), the International Residential Code (IRC), nor the ASHRAE Handbook—Fundamentals requires the use of a vapor barrier in all enclosures. These codes also do not require the use of a polyethylene sheet as an air barrier or a vapor barrier. The IRC (1998) states in Clause 321.1:

In all frame walls and floors and ceilings, not ventilated to allow moisture to escape, an approved vapour retarder having a maximum perm rating of 1.0 when tested in accordance with ASTM E96 shall be used on the warm-in-winter side of the thermal insulation.

Canadian codes (i.e., Part 5 of the NBCC) wisely require that vapor diffusion be controlled only when an assembly “would be adversely affected by condensation.” The need for a specific vapor barrier layer can be assessed by simple calculations, and rarely is a layer with very low permeance required (although it may be acceptable for many enclosure systems in some climates). However, in this author’s experience both in the U.S. and Canada, the local code official and many engineers will still require vapor barriers even when the specific code wording does not apply.

The early history of the science of moisture control is primarily one of controlling vapor diffusion wetting. One of the reasons for this is the relative ease with which vapor diffusion can be calculated and explicitly controlled by the designer.

Rowley, who can be considered the father of vapor barrier requirements (Rose 1997), built a full-scale house and placed it inside a refrigerated climate chamber. With outdoor conditions of –29ºC (–20ºF), his data showed that a framed wall without a vapor retarder would experience a condensation rate of about 21.5 g/m2 day (0.07 ounce/ft2 day) or 1 g/m2 h. This would increase the moisture content of a 12.7 mm (0.5 in.) wood sheathing by 2.4%/month. This small source of moisture was his evidence that vapor barriers were required. The common misunderstanding of the relative magnitude of vapor diffusion wetting is one reason for the common belief that vapor barriers play a significant role in preventing wetting in most enclosures.

The concept of drained and screened wall systems as a superior means of controlling rain penetration by enhancing drainage drying was widely used but only analyzed and promoted from the 1950s and 1960s. The control of air leakage and the energy and moisture it carries into an enclosure was the emphasis of much research and education throughout the 1970s and 1980s in Canada (e.g., Latta 1976; IRC/NRCC 1986) but still receives little attention in many modern codes.

The fact that many vapor barriers also retard or eliminate airflow sometimes causes confusion. In fact, much of the older literature (and a remarkable proportion of current documents) confuse or combine the function of the air barrier system and vapor barriers, and the difference between the two is still one of the most common building science questions. Therefore, the distinction will be presented here once again.

The function of a vapor barrier is simply the control of water vapor diffusion to reduce the occurrence or intensity of condensation. As such, it has one performance requirement: it must have the specified level of vapor permeance and be installed to cover most of the area of an enclosure. If a small crack or perforation occurs in a vapor barrier, its performance is not substantially reduced and such imperfections can be accepted.

Air barrier systems control airflow and thereby control convective vapor transport. The control of air flow provides other benefits such as increased comfort, reduced energy consumption, control of odor, and sound transmission and has at least five performance requirements to meet: it must be continuous, durable, stiff (or restrained), strong, and air impermeable (Straube 2001).

Some building codes require an air barrier system in all enclosures, or (in the case of Canadian codes) in those that would be adversely affected by condensation. In practice, this means air barriers are required for almost all conceivable types of building enclosures, especially since air barriers do more than just control condensation.

This section provides simple steady-state vapor-diffusion calculations using the method shown in the 1997 ASHRAE Handbook—Fundamentals and initially promoted by Rowely. It is important to note that all of the following calculations assume good air barrier systems. While these calculations are not very accurate, they are transparent, generally very conservative, and have been used since the mid-1930s (since their development by Miller) to assess vapor diffusion in building enclosures. The same calculations can be conducted using a more sophisticated hourly analysis program, but these types of programs require detailed input data (material properties and weather conditions) and specialist knowledge.

It is often believed that including a vapor barrier on the warm side of a wall in a cold climate will eliminate condensation. As will be shown with the aid of a few simple examples, this belief cannot be supported by the physics of vapor diffusion, yet it is the underpinnings of the reasoning used for the widespread use of low-permeance vapor retarders. Consider a framed wall with a 60 metric perms (1 U.S. perm) vapor retarder inside, 90 mm of batt insulation, and 40 metric perm (0.7 U.S. perm) sheathing (e.g., such as dry plywood). For a cold climate such as Omaha, Nebraska, the 97.5% winter design temperature is –19ºC (–2ºF) and heating degree-days (HDD) are 3500ºC (6300ºF) (ASHRAE 1997). Table 1 shows the predicted vapor conditions calculated, which indicate condensation will occur (at the back of the plywood). Although –19ºC is very cold weather, further calculation shows that condensation will also occur under outdoor temperatures as warm as 5ºC (41ºF). To avoid condensation at –19ºC, a vapor barrier with a vapor permeance of lower than 1.5 metric perms (e.g., more than two sheets of 6 mil, 0.15 mm thick polyethylene) would be required.

If the code-approved vapor retarder were replaced with a layer of primer and two coats of latex paint over gypsum drywall (which has a permeance of about 3 U.S. perms, or 180 metric perms), condensation would of course still occur and would only stop at temperatures above 6ºC (43ºF).

Controlling the Amount of Condensation

Comparing the performance of the wall above with and without a vapor barrier, it can be seen that the occurrence of condensation is not a very useful measure of the need for a vapor barrier. The primary benefit . . . 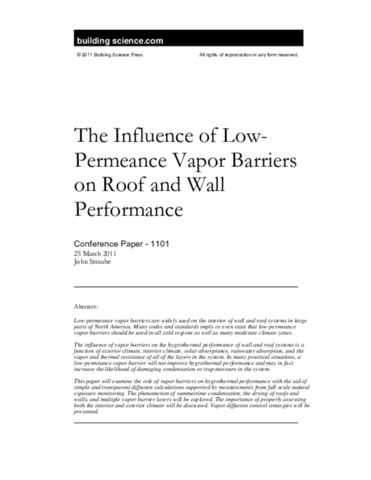