This paper is from the proceedings of the Thermal Performance of the Exterior Envelopes of Whole Buildings XI International Conference, December 5-9, 2010 in Clearwater, Florida. This paper summarizes some of the limitations of the various approaches to assessing the freeze-thaw resistance of brick masonry units and presents a detailed methodology for using frost dilatometry to determine the critical degree of saturation of brick material. Test results are presented for bricks from several historical load-bearing masonry. Recommendations are made for applying this approach together with hygrothermal model in the design of retrofit insulation projects.

Older load-bearing clay brick masonry buildings are common throughout North America and are considered good candidates for renovation and conversion: they are often in desirable urban location, have strong structures, are often aesthetically pleasing with architectural significance, and have useful window areas and floor plans. Given the current and expected future energy costs and demands for carbon emission reductions, insulation retrofits are a highly desirable as part of any modern retrofit of this type of building stock.

Adding insulation to the exterior of any existing building is always the preferred approach for retrofits. This practically eliminates thermal bridging while simultaneously protecting the load-bearing structure from all exterior climatic elements. However, for aesthetic and historical reasons, the exterior of many load-bearing clay brick buildings must remain exposed, and interior retrofits must be considered. Unfortunately, the addition of insulation will change the thermal and moisture balance of any wall assembly and, in some cases, can initiate moisture problems such as freeze-thaw damage (Straube and Schumacher 2007) in masonry units by decreasing the drying capacity while simultaneously reducing the temperature of the inner wythes (note: the number and severity of freeze-thaw cycling of the exterior wythe is rarely changed significantly by an interior insulation retrofit, as the exterior face was always exposed to severe temperatures and rain wetting).

The very real increased risk of freeze-thaw damage has caused many designers and owners to avoid the addition of interior insulation. This is a major loss of energy saving potential and often renders a building less comfortable and usable than it would be if insulated. A rational method of assessing the risk of freeze-thaw damage due to various insulation strategies is required to guide owners in decision making.

It is proposed in this paper that one approach to assessing the risk of frost damage to brick in a insulation retrofit is to have a test that could quickly and easily determine the critical degree of saturation Scrit of the brick and compare this to the maximum degree of saturation it will experience during freezing events in field service. This is approach analogous to designing a structural member by ensuring that it possesses the strength to resist anticipated loads. There is no such thing as an inherently load-resistant beam or column. So, when planning a retrofit strategy, an engineer or architect can pursue a strategy in which the predicted in-service moisture load will be less than the critical degree of saturation of the material. The brick properties cannot be changed in a retrofit, but the temperature and moisture conditions experienced by each wythe can be by a combination of insulation strategy (quantity, vapor permeance) and exterior surface rain control details (e.g., rain shedding at parapets, window sills, base splashback). Obviously this strategy should be customized for each climate zone, exposure of building, and brick (including the differences between face brick, core brick, and interior brick).

In most new building projects, manufactured clay brick must meet criteria established by ASTM International in the United States and the Canadian Standards Association (CSA) in Canada. ASTM Standard C62-05, Standard Specification for Building Brick (Solid Masonry Units Made from Clay or Shale), and ASTM Standard C216-07a, Standard Specification for Facing Brick (Solid Masonry Units Made from Clay or Shale), grade brick based on its resistance to frost damage as severe weathering (SW), moderate weathering (MW), or negligible weathering (NW) and CSA Standard A82-06, Fired Masonry Brick Made from Clay or Shale, grades brick as either exterior grade (EG) or interior grade (IG). Due to Canada’s cool climate, all brick used in exterior applications must be exterior grade (ASTM grade SW).

ASTM and CSA have adopted very similar criteria for SW and EG bricks. In order for brick to be accepted as exterior grade or severe weathering, it must meet the criteria listed in Table 1. The compressive strength criteria are identical in both standards. The absorption and saturation criteria of CSA are equal to the more stringent criteria for a 5-brick average of the ASTM standard, while the ASTM standard slightly relaxes the maximum allowable boiling absorption and saturation coefficient required of an individual brick. ASTM and CSA also specify that a brick needs only to pass either the maximum saturation coefficient or maximum cold-water absorption criteria; it does not need to meet both. It should be noted that the procedures used in calculating the values of acceptance criteria are contained in a separate standard, ASTM Standard C67-07a, Standard Test Methods for Sampling and Testing Brick and Structural Clay Tile.

The acceptance criteria used by ASTM and the CSA were selected under the assumption that adequate open-pore space should be provided to accommodate expansion of water as it freezes (Crawford 1984). The boiling absorption value is assumed to be an estimate of the open-pore space available to store water. The 24-hour cold-water absorption is an approximation of the likely moisture content after a severe wetting event. The saturation coefficient, calculated as the ratio of cold-water absorption to boiling absorption, is a measure of the amount of open-pore space available to accommodate freezing expansion. The 8% maximum limit for water absorption after 24 hours is intended to ensure the brick does not too readily absorb water, but has limited basis in research. It is has been well documented that a significant fraction of bricks that pass the ASTM/CSA standard subsequently fail in service, while other bricks that fail the standard have been proven durable in practice (Butterworth and Baldwin 1964; Litvan 1975). Some highly absorbent bricks (well over the 8% maximum limit) have shown very good durability in the face wythe of buildings in cold climates (i.e., they are exposed to freeze-thaw cycling). Despite this, no improved standard has been developed and adopted.

A brick that does not meet the acceptance criteria can still be passed by the ASTM/CSA standards provided it passes an omni-directional pass/fail freeze-thaw test specified by CSA Standard A82-06, clause 14, and ASTM Standard C67-07a, clause 9. The freeze-thaw test specified by the CSA is essentially identical to the ASTM test. The test procedure can be summarized as follows. Half-brick samples, after being ovendried and cooled to room temperature, are soaked for approximately 4 hours in a thawing tank. They are then removed from the tank and the head face is laid in 12 mm (1/2 in.) of standing water and placed in a cold chamber for approximately 20 hours. This constitutes one freeze-thaw cycle, and should be approximately 24 hours in duration. The samples are subjected to 50 cycles (taking 10 weeks to complete if cycles are only carried out on standard business days) or until disintegration, which the CSA defines as 5% mass loss (ASTM defines it as 3% mass loss) or the development of cracks in excess of the specimen’s least dimension as determined by visual inspection. If, after 50 cycles, the specimens do not have a mass loss greater “than that permitted by the referenced unit specification for the appropriate classification” and has not developed cracks with a length greater “than that permitted by the reference unit specification for the appropriate classification” (ASTM Standard C67-07a, clause 9.4.3), it is considered to have passed the test. This test is meant to replicate extreme field conditions of multiple freezing cycles while the brick is in a saturated condition.

The primary shortcoming of predicting durability of a material based on the ASTM and CSA acceptance criteria is that they are based on an incomplete understanding of the physics of freeze-thaw damage, an oversimplification of field exposure conditions, and testing that focus on unit, not material, response to freeze-thaw cycling. The c/b ratio is based on the expectation that frost damage is principally due to the volumetric expansion of water as it freezes. However, this is not the sole mechanism of freeze-thaw damage, although it may be the most important (Litvan 1988). Therefore, the inference between the saturation coefficient and durability that forms the basis of the ASTM/CSA acceptance criteria is at best a rough guide to in-service clay unit durability; it is not a reliable measure of the frost resistance of the clay brick unit, or the clay brick material.

Relying solely on acceptance criteria or the 50-cycle test does not provide an adequate basis for determining market eligibility of a product and can expose building owners to hefty maintenance or replacement costs in the case of incorrect approvals. Furthermore, in existing buildings, pass-fail criteria are not always very useful, as the masonry already exists and cannot be modified in situ. A designer may be able to reduce the moisture load on a masonry façade, and thereby reduce the risk of freeze-thaw damage, by changes in the building façade.

The fundamental problem with grading frost resistance of brick, as enshrined in the CSA/ASTM standards, is that no such thing exists. ASTM recognizes this in Appendix X4 of Standard C216-07a, which includes the disclaimer that “in severe exposures, even Grade SW brick may spall under certain conditions of moisture infiltration, chemical actions, or salt crystallization.” This is just another way of saying that all materials will fail when subjected to harsh enough conditions. Thus, “freeze-thaw resistance” is a misleading concept because it implies that a material can be capable of withstanding all possible damage mechanisms imposed by frost action under all conceivable circumstances. . . 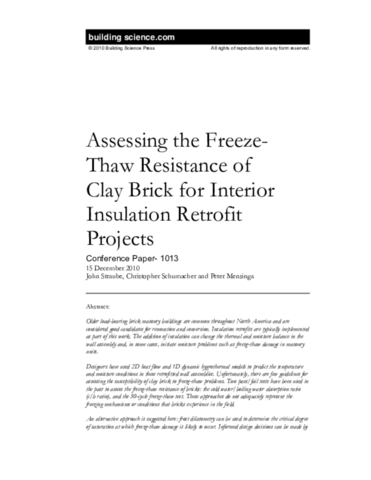