The following report is an excerpt from the 2010 Building Science Corporation Industry Team Building America Annual Report. The main focus for this research project is the integration of a combination space and domestic hot water heating system (“combi system”) with a high-efficiency air source heat pump to optimize efficiency and comfort.

Highlights for the last quarterly report/year-end report to NETL

The research plan for this project was finalized by February 2010. BSC then continued with its main focus on the integration of a combination space domestic hot water heating system ("combi system") with a high-efficiency air source heat pump to optimize efficiency and comfort.

An initial effort began to quantify and classify the type of challenges that face HVAC and DHW systems low-energy homes. A review and comparison was done on the types of equipment available in North America and emerging equipment from Asia and Europe. An information sheet was prepared regarding the importance of proper refrigerant charge for cooling systems and the negative impacts of improper charge.

This project continued to evaluate combination space and domestic hot water heating system configurations and trade-offs, including application as backup for cold climate air source heat pump systems (for both new construciton and existing buildings). Such an application could improve delivered comfort and extend efficient air source heat pump applicability in cold climates. A matrix of combi system applications for new retrofit construction, with the goal of modeling some of those systems for performance and controls optimization, was develped. BSC developed a draft matrix of system configurations for TRNSYS modeling, and a preliminary TRNSYS model has been started to provide insight into optimizing the combo heating system when used as backup for an air source heat pump system. Discussions were begun with ORNL researchers, and others, to better understand the state of the art in modeling air source heat pump defrost operation. It appears that the current modeling technique applies a very basic energy use post-processing adjustment factor to approximate the enrgy impact of defrost operation. BSC plans to work on modeling the entire system in much more detail in TRNSYS to allow optimization strategies. This will include a short time step model that includes using actual outdoor temperature and estimates of the outdoor coil temperature, along with heat from a combi system hydronic coil to boost supply air during defrost cycles.

BSC discussed the potential to do field evaluation of the integrated combi/air source heat pump system with some potential builder and utility partners in New England, but was not ultimately successful in initiating a project in 2010. However, a project synergy began to emerge when personnel from NYSERDA contacted BSC about pilot deep energy retrofit projects planned in Utica and Rome, NY. NYSERDA wanted to employ the combi system part of BSC's research without the air source heat pump. BSC updated and provided system schematics to NYSERDA for consideration in their retrofit programs.

NYSERDA conducted meetings with contractors and proceed with soliciting contractors bids for the BSC-developed system, which included a combination space and domestic hot water heating system using a tankless gas hot water heater in combination with a small storage tank. This project materialized into a research coolaboration effort with NYSERDA for their deep energy retrofit program in upstate New York. BSC specifications were used in the bid package and BSC participated in post-award meetings with the builder, mechanical contractor, and hot water heater manufacturer Rinnai. As a result of BSC's contribution in those meetings, Rinnai now officially offers its standard 12 year warranty on its tankless condensind hot water heating equipment for space heating installations, as opposed to the previous warranty reduction to 3 years.

In July-August, three of the combi systems following th eBSD dsign were installed in Utica and Rome, NY by NYSERDA contractors. Figure 1 shows a schematic of the system; Appendix A includes a more detailed specifications. The systems (eithout cental cooling) were very economical, at roughly $3,500 each installed cost. BSC provided advice during the process as necessary, and as requested by NYSERDA and the installing mecahnical contractor. The Utica installation was first, which comprised two systems in a two-family (duplex) home. The systems operated withour problems for about the first month; however, water quality issues due to replacement and back-flushing of utility main water lines occurred and had to be addressed. While debris from back-flushing the main water lines did cause the water heater strainer to clog, stopping the heater from operating until the strainer was cleaned, there is still an ongoing problem with strainer clodding which BSC believes is due to the electronic water conditioner gradually clearing out old scale in the cold water feed pipes that were not replaced. In order to cure that problem, a new cold water line from the meter to the hot water heating system is being piped for each system.

NYSERDA planned to track the system performance only by utility bills, so BSC initiated plans to install more detailed temperature, runtime, and energy use monitoring on these two systems to track their performance. In October, BSC developed the monitoring plan and installed the monitoring instrumentation on both of the Utica systems. Data will be collected over an internet connection. Figure 2 shoes a photo of the installed combi system in Utica, NY with the attached monitoring instrumentation. The channels being monitored at 1-minute intervals for each unit are:

Figure 2: Photos of the two installed systems in Utica, NY with monitoring instrumentation

BSC's development of this novel combination space and domestic hot water heating system for low energy houses is gaining national attention (ACI, SMUD, etc) and particularly for retrofit projects. This space conditioning system research project is expected to continue through 2011 to track the Utical systems' performance and further inform furture potential installations. Appendix B is an email exchange that describes the status of the project at the close of the NETL contract period. . . 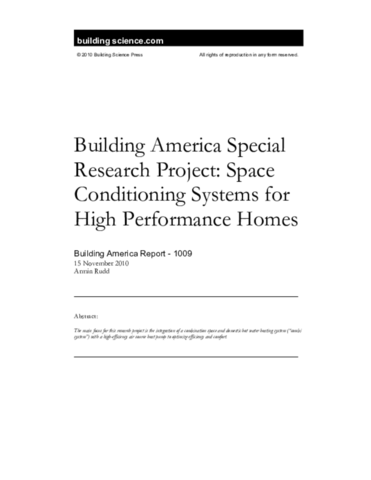