The following report is an excerpt from the 2010 Building Science Corporation Industry Team Building America Annual Report. This report investigates the implementation of advanced framing in both production and prototype built homes built in a variety of climate regions across the USA. The current industry standard wall is being replaced by a 2×6 frame at 24-inch centers with single top plates, two-stud corners, no jack studs, no cripples and single headers (and in many cases no headers at all). Advanced framing can save energy, greenhouse gas emissions, and money if properly implemented. To maximize cost savings and energy savings for the homeowner, the builder financial savings are best shifted to implementing more energy saving measures.

The current industry standard wall—a 2x4 frame at 16 in. (400 mm) centers with double top plates, three stud corners, jack studs, cripples and double headers—is being replaced by a 2x6 frame at 24 in. (600 mm) centers with single top plates, two-stud corners, no jack studs, no cripples and single headers (and in many cases no headers at all). The advanced framing system is cheaper because it uses 5% to 10% less lumber (board-feet), and it is faster because it uses 30% fewer pieces. It saves energy because it provides a 60% deeper cavity which allows 60% more cavity insulation and it decreases the framing factor.

The framing elements are farther apart allowing easier installation of services—everything fits more easily making the trades happier—the electricain drills fewer holes and the insulator insulates faster because there are fewer cavities, even though the cavities are wider and deeper. Everything lines up so the load paths are direct, leading to fewer but stronger connections. The lines are cleaner, so it just looks and feels better.

Some of the advanced frame technology goes back to the beginnings of framing—"in-line" framing or "stack" framing where everything lines up is not new (Figure1). But, the real innovations came from collaboration between the U.S. Deparment of Housing and Urban Development (HUD) and the National Association of Home Builders Research Foundation (NAHB Research Foundation) in the 1970s. Out of a HUD initiative called Operation Breakthrough the NAHB Research Foundation delivered "optimum value engineering framing" or OVE framing. Today, this is referred to as "Advanced Frmaing." Figure 2 shows the current expression of advanced framing. Everything lines up so that double top plates are not necessary. No headers in non load-bearing walls. Window openings are clean without jack studs and cripples. Exterior corners have two studs. Gypsum baord is supported with drywall clips.

And all of this code accepted by the model building codes because of the foresight of HUD and the NAHB. Although it's in the code, most code officials (and even fewer builders) are not aware of it. One of the biggest pushback's from builders and code officials comes from corner support for gypsum board and trim. "Floating corners" reduce drywall cracking and, therefore, are an improvement. Wood always moves because of changing moisture contents. Gypsum board does not want to move. When you attach something that is always moving to something that does not want to move you get cracking. The key to reducing drywall cracking is to attach it less. The easiest drywall clip in the past was to cut a piece of corner bead into 2 in. (51 mm) lengths.

Single top plates seem to be the most difficult to have implemented. Not from a structural perspective or from a constructability perspective but from a perception perspective. There are two ways of making a connection: with a metal plate or with a wood splice. The approach taken is purely one based on peference by the framer.

The real change involving single top plates is that when you are framing an 8 ft (2.4 m) wall the studs have to be 1.5 in. (38 mm) longer. Standard "pre-cuts" don't work. You need 94 inches (2.39 m) not 92.5 inches (2.35 m). Load-bearing walls need headers and advanced framing typically involves using single headers with the header pushed to the exterior of the wall. This keeps the header away from the gypsum board so that boarders can't attach to it, therefore, shrinkage in the header does not result in a crack in the drywall.

The most significant change is the fact that the walls are thicker and we have to figures out what to do with the additional 4 in. (100 mm). Do we make the foundation wider? Do we lose 4 in. (102 mm) to the interior? Do we keep the foundation the same, but cantilever the walls? These are not trivial decisions. In production housing interior dimensions are a big deal and can have effects on kitchen layouts, hallways and stairs. Site setbacks must be considered as well. It typically means that the architectural drawings have to be redone. Taking exisitng floor plans and redrawing them is a $1,000 to $1,500 cost per plan for a production builder. This is the biggest knock against advanced framing. Of course, this is not a problem if the plans are drawn up from scratch to be advanced framed.

The floor framing is now 24 in. (600 mm) centers, and that means the floor sheathing has to be thicker. The savings in the floor framing can help cover the cost of the thicker floor sheathing if it is required The interior walls are also framed on 24 in. (600 mm) centers using 2x4 studs. Almost all of them are non-load bearing hence the connections are pretty much non-structural.

Techniques and Components of Advanced Framing

Advanced framing consists of a base set of framing features which allows the builder to use 5% to 10% less board feet of wood, use 30% fewer pieces of wood, creating fewer thermal bridges all while reducing costs. BSC recommends the following features:

The following figures are photographs from a variety of homes that have implemented advanced framing measures. These details are also documented the drawings provided in Appendix 1. Building Science Corporation incorporates advanced framing in large numbers of its Building America homes. Prototype and single homes have been built for decades using advanced framing. It used to be less common to have entire communities built employing advanced framing techniques. David Weekley Homes (DWH) has taken the lessons learned from early prototypes and have fully embraced advanced framing company-wide, in all divisions, in all climate regions proving advanced framing can be deployed on a large scale. The Raleigh, NC division of DWH is in the process of completing the transition to advanced framing by updating their panelized framing plant. All homes built by the Raleigh division will be advanced framed. Similar changes are currently happening with the Houston division as well. 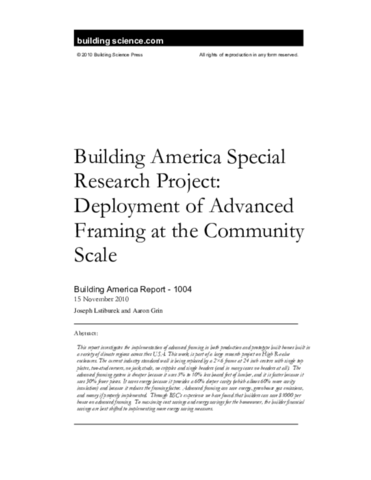