This report analyzes the performance of walls clad with HardiePlank fiber cement siding and compares them to traditional stucco assemblies. The data presented is a subset of experimental data from a multi-phase, multi-year research project at the Vancouver Field Exposure Test Facility led by Building Science Corporation (BSC) and Gauvin 2000 Construction Limited. The analysis includes results from normal operating conditions in a high stress exterior moisture environment (typical of the Pacific Northwest climate) and under intentional controlled wettings to the interior and exterior of the sheathing.

A test hut was constructed in the fall of 2005 in Coquitlam, British Columbia that permits the side-by-side construction and comparison of seven 1.0m x 2.4m (38" x 96") test wall panels on each cardinal orientation (for a total of 28 wall test panels) and three 3.6m x 7.2m (12' x 24') roof panels on the North and South facing roof slopes (for a total of 6 roof test panels). All of the test panels are exposed to the same controlled and monitored indoor conditions. The objective of the test hut was to determine the performance of historical, current and possible future wall assembly configurations under field conditions. Each wall or roof assembly is instrumented with different types of sensors to collect the desired assembly data (e.g. moisture content, temperature relative humidity, etc.) and is stored on a central data logger. Exterior weather data is also collected with a small meteorological tower mounted on the roof.

The third phase of testing started December 17, 2009 and was completed on November 3, 2011. The primary focus of this phase was to simulate wetting events directly against the exterior surface of the wood sheathing instead of the interior of the enclosure as previously tested, while simulating representative interior wintertime relative humidity levels. These test conditions are described in more detail below.

This report is divided into five main sections:

This report will analyze the performance of walls clad with HardiePlank fiber cement siding compared to some traditional stucco assemblies. The specific details of the wall assemblies are described in Section 3.

The analysis will include the results from two conditions: performance under normal operating conditions (i.e. without intentionally adding water) in a high-stress exterior moisture environment that is typical of the Pacific Northwest climate, and performance under intentional controlled wettings to the interior and exterior of the wood-based sheathing.

This analysis is a small subset of all test hut data. Future analysis reports are expected to analyze various performance differences based on other comparison criteria such as vapor control, ventilation, sheathing membrane and interior conditions.

The analysis of these walls will be done by comparing several criteria. These criteria include:

A 957 sq. ft. (29’x33’) field exposure test facility was designed and constructed in the Coquitlam suburb of lower mainland BC. The test facility was constructed on the roof of a low-rise office building which is owned by Gauvin 2000 Construction. This location eliminated the need to buy or rent a large empty site (with free wind and solar approach) in the expensive real estate market of greater Vancouver. It also affords the test facility some protection from vandalism. Each of the test walls was outfitted with a series of temperature, relative humidity (RH) and wood moisture content (MC) sensors. These sensors were continuously monitored and recorded throughout the testing period using a data acquisition system. Variations on a “typical” sensor package (illustrated Figure 5) were used for each test panel. Photographs of the individual sensors are shown below. One of the most significant advantages to using a test hut for analysis compared to instrumenting walls in existing buildings is that the experimenter can deliberately and easily stress the removable/replaceable walls with high moisture loads, either in terms of vapor (eg. >=50% interior RH) or liquid water (e.g. intentional wetting systems). In most cases, building owners are not interested in participating in research conducted on their enclosure walls by adding moisture.
In addition, it is often difficult to determine the performance of a wall system without stressing the moisture tolerances of a wall to determine the comparative risk of certain construction techniques. 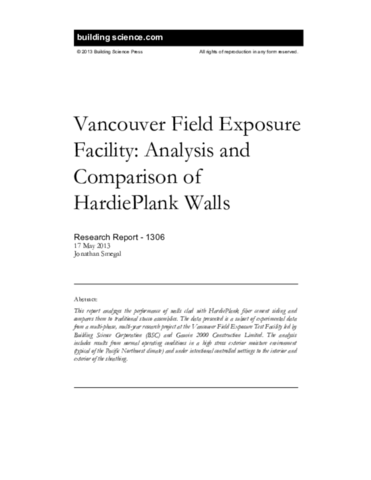